Just Released: Mayors and the Health of Cities 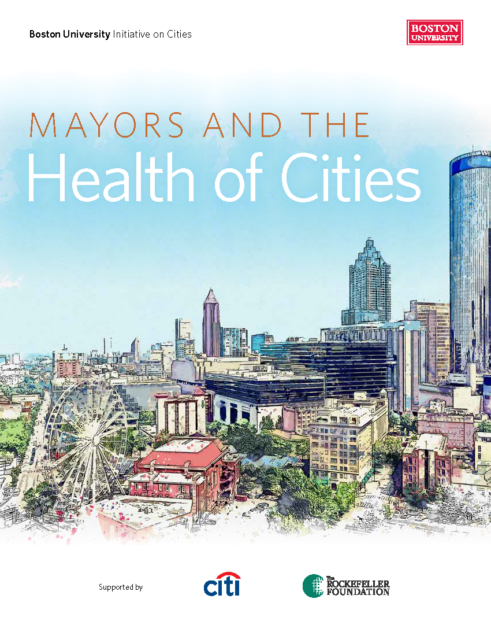 Today the Boston University Initiative on Cities, with support from Citi and The Rockefeller Foundation, launched Mayors and the Health of Cities, a new report that sheds light on how US mayors perceive and prioritize the health of their cities in the context of existing urban health data. The report also highlights promising city-led initiatives targeting four priority health areas: the obesity epidemic, the opioid crisis, traffic fatalities, and gun violence.

Report findings show that one-fourth (25%) of the 110 surveyed mayors identified obesity and related chronic diseases as their city’s greatest health challenge—beating out the opioid epidemic and other addiction-related issues (24%), as well as concerns over health care access or cost (14%). Currently, nearly two out of five US adults (39.8%) are obese, with 57.3% of today’s children projected to be obese by 2050.

However, when asked about their political accountability, mayors identified an entirely different set of health issues: they believe constituents hold them most accountable for traffic accidents (70%), gun violence (56%), and lead and other toxins (52%). Although obesity was identified as the top health challenge facing their cities, fewer than 10% of mayors believe constituents hold them accountable for this issue. Other priority health concerns, including opioids and mental health, were also ranked relatively low by mayors in terms of perceived accountability.

“Our report is the first to examine a representative sample of mayors across the U.S. and analyze their perceptions and priorities related to major public health concerns in the context of city-level health data. As our top health concerns have shifted over time, so too should our collective responsibility to address them,” said Dr. Monica Wang, Assistant Professor of Community Health Sciences at the Boston University School of Public Health. “No one sector alone can shoulder the burden of solving today’s complex health challenges. What is most exciting to me is the rich variety of cross-sectoral, multidisciplinary collaborations that cities are pursuing to target such challenges.  Whether through legislation, community programs, city-wide initiatives and campaigns, or changing the built environment, mayors are often a key catalyst or advocate for such efforts.”

Partisanship emerged as the strongest predictor of mayoral perceptions of accountability, with Democratic mayors more likely than their Republican peers to believe they are held accountable for gun violence (72% Democrats vs. 23% Republicans), hunger or malnourishment (55% vs. 32%), asthma (17% vs. 8%), and obesity (13% vs. 4%).

Findings included in the report are based on analyses from several datasets and sources, including a nationally representative survey of American mayors, the City Health Dashboard 500 Cities, and supplemental information from federal sources.

“A complex set of economic, social, environmental and political factors shape the health of Americans, making it one of the most challenging policy areas for any city leader to address,” said Jamie Alderslade, U.S. Markets Director for Citi Community Development and member of Initiative on Cities’ Advisory Board. “The Mayors and the Health of Cities Report provides essential new insights for anyone interested in advancing a meaningful national conversation, and ultimately action, on how we make enduring progress toward improving the health of our country.”

“This report showcases how data can play a crucial role in revealing the scope of the health challenges cities face today,” said Dr. Naveen Rao, Managing Director of Health at The Rockefeller Foundation. “With a better understanding of how mayors view the overall health of their cities, communities can better focus resources and develop partnerships to address these challenges and improve the wellbeing of their residents.”

The report was released at the National Press Club today (Tuesday, June 4, 2019), as part of a panel discussion on cities and health featuring health commissioners from Chicago and Washington, DC.

“When it comes to the health and well-being of their city, mayors care deeply and know their constituents are looking to them for solutions. Yet, just one out of five has a municipal health agency to lean on” said Katharine Lusk, report co-author and Co-Director of the Boston University Initiative on Cities. “But mayors actually have many in-house allies to tackle urgent health challenges. Transportation, Public Works, Police, Parks – these departments are all being enlisted as partners in addressing public health concerns.”

Despite variation in priorities and perceptions of accountability related to health challenges, one pattern emerged clearly: mayors understood that investing in the health of their cities and communities translates into overall well-being and prosperity.

Follow the conversation on social media using the hashtag #UrbanHealth

New White Paper: On the Use of ‘Cool Roofs’ to Reduce Residential Heat Exposure Disparities in Boston, MA

Valerie Sanchez Covaleda: My Summer with the City of Providence Office of Sustainability