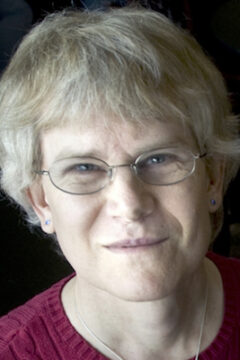 Alley Stoughton received her BS degree in mathematics/computer science and her MS degree in computer science from the University of California, Los Angeles, in 1979 and 1981, respectively. She concluded her graduate studies at the University of Edinburgh, Scotland, receiving her PhD degree in computer science in 1987 for research on the theory of programming languages. From 1986 until 1993, she was a research fellow and then a lecturer at the University of Sussex, England, continuing her work on programming language theory, but also developing an interest in implementing logic-based tools. In 1993, she joined Kansas State University as an associate professor, where she expanded her research to include functional programming. While at Kansas State University, she designed and implemented Forlan, an open-source toolset for experimenting with formal language theory. From 2012 until 2015, she was a member of the technical staff of MIT Lincoln Laboratory, where she focused on the application of formal methods and programming languages to cybersecurity. She continued this research focus as a researcher at IMDEA Software Institute, in Madrid, Spain, from 2015 until 2016. She joined Hariri Institute as a visiting fellow in 2017, where she continues to do research on formal methods for cryptography.