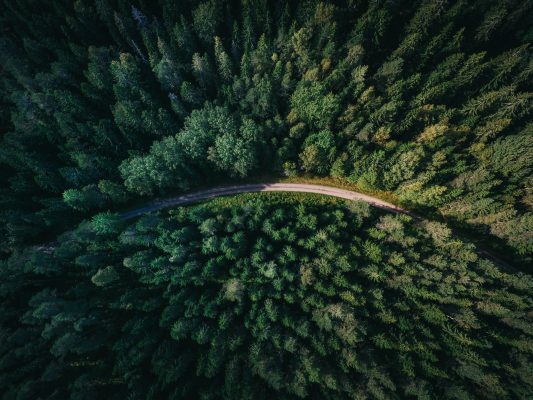 BU researchers Lucy Hutyra and Luca Morreale, along with scientists from Harvard Forest and The City University of New York, find that trees along the edges of temperate forests grow faster and are denser as a result of fragmentation.

Usually, deforestation conjures up images of fallen, lifeless trees and barren land. While this is a reality for tropical forests, temperate forests don’t seem to meet the same fate when faced with change. Researchers at Boston University, Harvard Forest, and The City University of New York used big data to study how the outskirts of temperate forests across the northeastern United States (US) change when manmade structures or agricultural land break the forests apart.

Luca Morreale, a Graduate Student Fellow at the Hariri Institute and PhD student in the Department of Earth and Environment, and Lucy Hutyra, a Research Fellow at the Hariri Institute and Professor of Earth & Environment, discovered that trees along the edges of temperate forests grow rather than die when faced with fragmentation. The team published their results recently in Nature Communications.

Temperate forests comprise about 25% of the world’s forested area and span four continents. Despite their ubiquity, temperate forests’ response to fragmentation are not well understood. Most studies focus on trees at the fringes of tropical forests that are threatened by strong winds, high temperatures, and dry conditions.

Trees along the edges of temperate forests face these same dangers, but Hutyra predicted that temperate forests would grow over time after being broken apart. Lumberjacks thin forests as part of the forestry process and anecdotal evidence suggests that the additional sunlight from tree removal stimulates growth in the trees that remain. Hutyra’s team found evidence of this in Massachusetts, where trees along the forests’ edges grow faster than those towards the middle. But, Morreale wanted to see whether this trend extended beyond Massachusetts to temperate forests across a larger region.

Morreale analyzed 48,000 forested areas across 20 states using data collected by the US Department of Agriculture Forest Inventory and Analysis (FIA) program from 2010-2020. “We didn’t do a big manipulation experiment like the Smithsonian did in the tropics in the [19]90s,” said Hutyra, “We did a pseudo manipulation experiment using big data and matching that enabled us to see a relatively consistent trend.”

The team discovered that breaking up temperate forests can cause trees to grow more along the forests’ edges. Trees along the outskirts grew faster and denser in response to fragmentation. “It was surprising, the consistency of the response across the US, since the dataset covers a lot of different temperate forests,” said Morreale. Hutyra and Morreale also found that forest edges created by humans grow more than natural edges. This suggests that how fragmentation happens greatly influences the neighboring forests.

Hutyra and Morreale think that the extra light trees get on the temperate forests’ edges outweigh any negative effects of being exposed, but climate change could tip the scales. “If the climate changes sufficiently where trees start to become too heat stressed or too water limited along the edges, it won’t matter how much light they have,” warns Hutyra, “The trees will grow slower and potentially die.”

In order to make accurate predictions about climate change, projections need to account for the diversity of Earth’s ecosystems. That means including data on how temperate forests respond to change, which influences the amount of carbon dioxide (CO2) they take up from the atmosphere. Given the extent of global forest fragmentation, it is critical that climate models capture these impacts and the different responses observed in temperate and tropical forests. “Our findings are actually a rare piece of good news in climate science,” said Hutyra, “But it is not in the current models and our predictions of what the future looks like don’t include this. This means that we may get the wrong answers as we continue to fragment our forests and the climate continues to warm.”

To learn more about the Hariri Institute’s transformational research, click here to sign up for our newsletter.