By Samantha Igo and Ember Larregui

The past few months have been marked by extreme weather events unprecedented in their frequency and severity, racking up nearly $298 billion in damages so far this year. In the face of the pandemic and the worsening climate crisis, the International Monetary Fund (IMF) announced a historic allocation of $650 billion in Special Drawing Rights to support green, resilient recoveries around the world, but questions still linger over how best to re-channel the IMF’s quasi-currency to countries most in need.

This is the stage on which the IMF and World Bank kick off their Annual Meetings from October 11-17, 2021. As the IMF and World Bank convene with policymakers, civil society and researchers from around the world, the Boston University Global Development Policy Center has produced a suite of research aimed at helping countries secure the fiscal and policy space needed to support public health and vulnerable communities and mount a green and inclusive recovery. This year, new releases include the launch of a new Task Force on Climate, Development and the IMF, which seeks to advance a development-centered approach to climate policy at the world’s only rules-based multilateral institution charged with overseeing global financial and monetary stability.

See highlights from our latest research below:

Toward Development-Centered Climate Change Policy at the International Monetary Fund

As the only multilateral, rules-based institution charged with promoting the stability of the international financial and monetary system in order to enable longer-run growth, the IMF has a central role to play in the transition to a low-carbon and resilient global economy. To that end, the Task Force on Climate, Development and the International Monetary Fund is a consortium of experts from around the world convened to support the Intergovernmental Group of Twenty-Four and the Vulnerable Group of Twenty Ministers of Finance.

The Task Force’s inaugural strategy report outlines the founding guidelines of the Task Force and providing context and envisioning the key elements that should form a development-centered approach to climate change at the IMF. The report further outlines a set of principles to guide the evolution of the IMF’s climate strategies for the next decade and beyond. Read the strategy report.

Understanding the Consequences of IMF Surcharges: The Need for Reform

In exchange for IMF lending, governments surrender some sovereignty, self-determination of their economic policies and implicitly admit that the government, on its own, could not manage the travails through which it is going. A lesser known, but costly, trade-off is that the IMF imposes significant surcharges—akin to the penalty rates imposed by banks—on countries with large borrowings from the IMF that are not paid back within a relatively short time.

The IMF estimates borrowing countries will pay over $4 billion in extra surcharges on top of interest payments and fees from the beginning of the COVID-19 crisis through the end of 2022. Additionally, the IMF estimates the surcharges have become the Fund’s largest source of revenue, accounting for almost half of revenues during this period.

A new policy brief  by Joseph E. Stiglitz and Kevin P. Gallagher explores the consequences of the IMF’s surcharges and issues an urgent call for reform. The policy brief is jointly published with the Initiative for Policy Dialogue at Columbia University. Read the policy brief.

Re-channeling Special Drawing Rights for a Climate Resilient and Just Transition: Prospects for a Resilience and Sustainability Trust

In a historic breakthrough for the multilateral system, the IMF approved the global allocation of $650 billion in Special Drawing Rights to support liquidity and foster the resilience of the global economy in the wake of the COVID-19 pandemic.

In a new policy brief, the Task Force on Climate, Development and the International Monetary Fund outlines the core objectives, modalities, eligibility and scale that should form the core of the proposed Resilience and Sustainability Trust (RST). The authors argue that a well-designed RST would fill an important gap in the climate finance landscape that is not currently equipped, at the global level, to help countries overcome economic instability created by climate change. The RST would also bring the international community one step closer to the resources needed to help countries adapt and respond to climate change in a just and development-centered manner. Read the policy brief.

The IMF has proposed a Resilience and Sustainability Trust (RST), aimed at helping countries build resilience, respond to climate change and make green transitions that can support both development and climate. For the OECD Development Matters blog, the Task Force on Climate, Development and the IMF outline how the RST, if designed right, could play a key role in global climate action. The authors note the RST will need to be scaled up over time through additional SDR issuances and re-channeling efforts, with replenishment and expansion through hard currency contributions. Ultimately, they argue the IMF can’t make the global climate crisis adapt to its instrumentation, it must adapt its instrumentation to address the climate crisis and development goals. An ambitious and well-designed RST could do just that. Read the op-ed.

Resetting the Global Financial Safety Net for the COVID-19 Recovery

Due to the pandemic, 2020 saw the sharpest economic downturn since the Great Depression. In 2021, the world economy is showing signs of a broad, albeit uneven recovery. In particular, many emerging markets and developing countries that are lacking policy options in coping with uncertainty and spillover effects from advanced economies are desperate for liquidity support. In a new policy brief published by T20 Italy’s International Finance Task Force, Kevin Gallagher, William Kring and co-authors propose a reset to the Global Financial Safety Net (GFSN), designed to provide financial assistance for countries in need. Among their recommendations are boosting the use of the IMF’s Special Drawing Rights, broadening coverage and enhancing the role of Regional Financial Arrangements and aligning the GFSN with the 2030 Sustainable Development Goals and the Paris Climate Agreement. Read the policy brief. 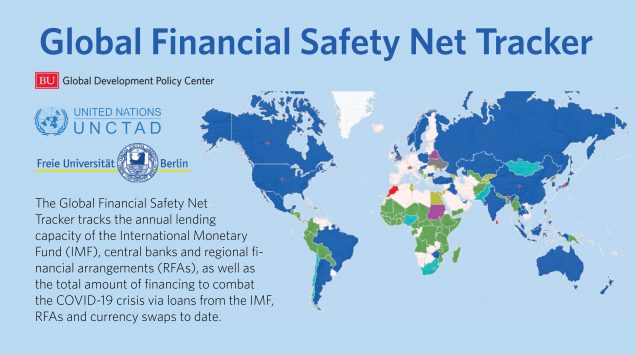 What is the annual lending capacity of the IMF and how much financing have countries been able to access since the onset of the COVID-19 economic crisis? Updated with new data in October 2021 and developed in partnership with Freie Universitat, Berlin and UNCTAD, the Global Financial Safety Net Tracker tracks the annual lending capacity of the IMF, central banks and regional financial arrangements (RFAs), as well as the total amount of financing allotted to combat the COVID-19 crisis via loans from the IMF, RFAs and currency swaps to date. Explore the data. 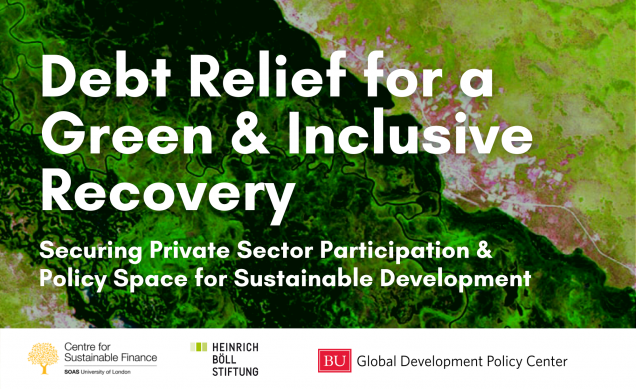 A debt crisis is looming in the Global South, compounded by the threat of climate change. High levels of debt service are impeding crisis responses and contributing to a worsening development prospects in many low- and middle-income countries. It also threatens the ability of countries to adapt to the impending climate crisis and to achieve the 2030 Sustainable Development Goals. World leaders have added their voices to a growing chorus calling for comprehensive debt relief linked to a green and inclusive recovery that involves private sector participation and middle-income countries.

A new report from the Boston University Global Development Policy Center, the Heinrich Böll Foundation and the Centre for Sustainable Finance at SOAS, University of London lays out an ambitious proposal for concerted and comprehensive debt relief on a global scale to free up resources in heavily indebted developing countries to support sustainable recoveries, boost economic resilience and foster a just transition to a low-carbon economy. Read the report.

IMF Austerity is Alive and Increasing Poverty and Inequality

For years, researchers have debated the IMF use of austerity, or required fiscal budget tightening: how common it is, which borrowers receive such requirements, whether IMF practice has changed after successive financial crises and what impacts such austerity has had. Pushing these questions further, Rebecca Ray summarizes two recent working papers that deploy a new dataset of 154 IMF financial agreements over 18 years, showing that IMF-mandate austerity has not diminished in intensity since the 2008 financial crisis and that borrowing countries are more likely to face austerity if they are host to significant foreign direct investment (FDI), particularly from Western Europe. Additionally, IMF austerity is associated with increasing levels of income inequality and poverty in borrowing nations. Read the blog. 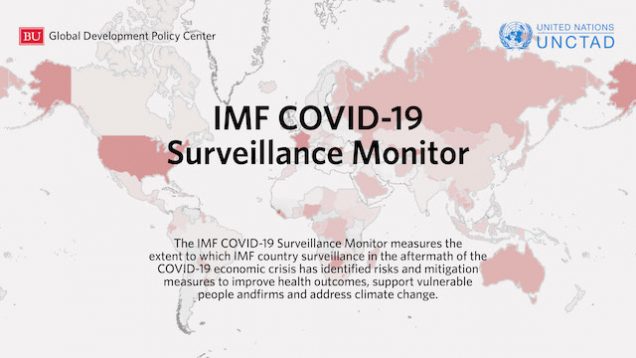 One of the core activities of the IMF is to oversee the international monetary and financial system and monitor the economic and financial policies of its 190 member countries, known as surveillance. The IMF COVID-19 Surveillance Monitor measures the extent to which IMF country surveillance since the start of COVID-19 has identified risks and mitigation measures to help borrower countries improve health outcomes, support vulnerable people and firms and address climate change. Explore the data. 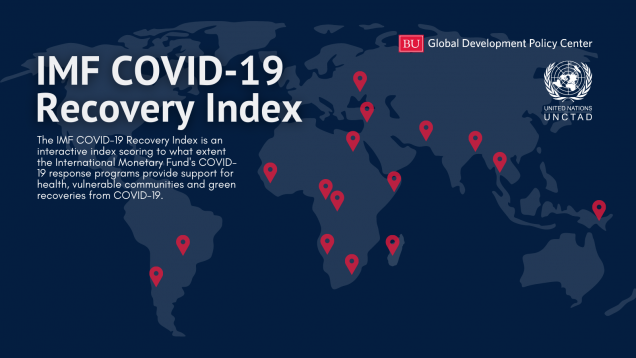 The interactive IMF COVID-19 Recovery Index allows users to explore to what extent the financial assistance programs initiated by the IMF since the start of COVID-19 help borrower countries combat the virus, support the vulnerable and promote a green and inclusive recovery from COVID-19.

Assigning the programs scores ranging from 0-3, the Index shows that among the 75 program begun since March 2020, the IMF has paid significant attention to supporting health and vulnerable communities, but support for financing green recoveries is lagging. Explore the data.

Never miss an update: subscribe to updates from our Global Economic Governance Initiative.