Though 2020 was a year of economic contraction around the world, it was also a year of continued growth and enlargement for the Belt and Road Initiative (BRI) and the Asian Infrastructure Investment Bank (AIIB) in Latin America. Additionally, the Chinese share of regional exports grew, as did China’s energy sector involvement and $215 million in medical aid was sent to the region to bolster the COVID-19 response. In the recently published China-Latin America Economic Bulletin, Rebecca Ray, Zara Albright and Kehan Wang tracked the changes in Chinese investment and lending to Latin America and the Caribbean over an extremely unusual year. 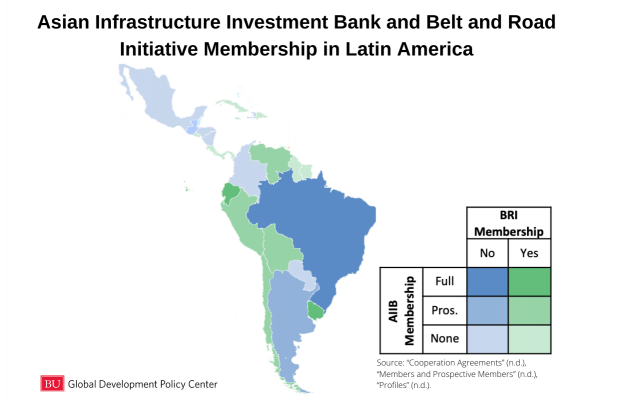 Tracking these trends in the chart, dark green countries (Ecuador and Uruguay) are full members of the AIIB and also BRI signatories. Medium green countries (Bolivia, Chile, Peru and Venezuela) are BRI signatories, but only prospective AIIB members, having not yet paid their bank shares. Brazil, the only country in dark blue and Argentina, the only country in medium blue, are not BRI members, but are full (Brazil) or prospective (Argentina) AIIB members.

Despite the number of new relationships, there were also partnerships that fell under the stress of COVID-19. For the first time in 15 years, China’s two policy banks, the China Development Bank (CDB) and the Export-Import Bank of China (CHEXIM) signed no new financing commitments with governments in Latin American and the Caribbean. Instead, renegotiations of existing debts began, culminating in the suspension of $891 million in payments by Ecuador.

What exactly does the future look like for the BRI and AIIB in Latin America? Ray, Albright and Wang expect investments to rebound in the post-pandemic period. Negotiations are already ongoing regarding vaccine distribution and Argentina and China have begun discussing a $30 billion package of investment plans across 15 key infrastructure and energy projects. However, there is some level of expected trade volatility for metals, as China slowly declines stimulatory construction projects and demand changes.

Within the next year, China and Latin America will likely be back on track and furthering their AIIB and BRI partnerships.

Read the Bulletin
Tweets by GDP_Center