Green Transformation in China: Structures of Endowment, Investment and Employment

China’s economic growth and development over the past 40 years has been remarkable, lifting over 700 million people out of poverty. However, this growth has come with huge costs to the environment and a resultant loss in productivity.

According to the World Bank Group, if China could shift to a greener growth pattern, a net improvement of 2.7 percent in gross national income could be achieved by 2030. It is therefore imperative that China’s structural transformation be green in nature and consistent with the UN 2030 Sustainable Development Goals (SDGs).

In a recent journal article with Hefeng Tong and Jiajun Xu, two major questions were considered:

The authors first examined China’s human capital as a part of its endowment and China’s industrial structure over time, then presented modeling results under different scenarios of human capital investment, concluding by discussing policy and climate implications for China.

The Linkage Between Endowment Structure and Greenness: Focusing on Human Capital

Investing in people can protect workers and improve security—an important aspect of quality of life. Moreover, if well distributed and targeted to the poor, investment in human capital can facilitate social inclusion. Investing in people may also help protect the natural capital and the environment through better education, especially through education of women and information exchange.

In the framework of the New Structural Economics, the factor endowment structure of a country determines its comparative advantages, and the optimal industrial structure in an economy at a specific time is endogenous to its comparative advantage; investment is the main instrument for changing the structure of endowment, which pushes a country’s industrial structure to deviate from a previous optimum towards a new equilibrium. If the government chooses a ‘catching-up’ strategy that focuses on heavy industries, defying the country’s comparative advantages, it may have to distort the prices of energy and other resources in order to protect nonviable enterprises—leading to excessive resource use and pollution. On the other hand, with a comparative advantage-following development strategy, developing country governments can leverage their natural and human capital and play a positive role in promoting the use of clean energy technologies.

China has experienced a dramatic transformation of its export and industrial structure: as late as 1984, 50 percent of China’s exports consisted of crude oil, coal, animal and agricultural products. After 40 years of reform and investment, China is now the world’s largest manufacturing producer, and has the most comprehensive industrial sectors covering a majority of all sectors in the UN classification of subsectors. Within a short period of time, both the labor-intensive and capital-intensive sectors have contracted in their shares in GDP, perhaps making way for the service sector. The construction sector and the ferrous metals sector (including steel) have expanded due in part to the demand for urbanization and large-scale hard infrastructure development.

However, despite these large expansions of physical infrastructure, China’s endowment structure is skewed toward human capital, which is somewhat unexpected. This means that China’s industrial structure, which has also brought in high levels of pollution and carbon emissions, seems to be lagging behind the changes in China’s endowment structure. This rapid expansion of human capital indicates that China’s comparative advantage has shifted toward the high-skilled service sector, away from the labor-intensive manufacturing sector. This trend points to the direction of future investment in China.

From the policy side, the Chinese government is paying more and more attention to green transformation. The five-year plans have been increasingly green, playing a guiding role in promoting green development, and are implemented by central, provincial and local governments. The implementation of green policies has also led to a significant reduction in air pollution in China.

The green transformation can be defined as a process of upgrading the current industrial structure, moving toward green sectors that have low “pollution intensity” with low emission of pollutants, where production is carried out using clean technology or renewable energy—a process that is more people-friendly and environmentally sustainable.

Using data from the year 2000 as the starting point, and data in 2000–2015 as the historical standard to calibrate the model, our research simulated China’s development pathways between 2000 and 2030, with a clear focus on relevant policies, as well as their likely impact on green transformation. We examined three scenarios: the baseline scenario, the green scenario with a focus on investment in human capital, and the tax-allocation scenario, which utilizes tax proceeds in green investment.

In the green scenario: First, by changing the orientation of green investment, physical capital will reallocate in the future (2016–2030) towards green sectors. Second, by changing government behavior towards supporting green economy, more fiscal investment will be used on education and public health to increase human capital accumulation. Third, the government will impose an environmental tax on pollutant discharge to reduce the incentive to pollute. Adjusting the allocation orientation of tax revenue can also generate different policy effects.

In short, the green transformation of China would have following three outcomes:

Moving toward a green development path will have some negative effects on China’s future growth, but the impact is not unmanageable. The real GDP growth rate would fall by 0.1 to 0.3 percentage points, but if taking into account the effect of declining pollution, overall the effect would be positive. 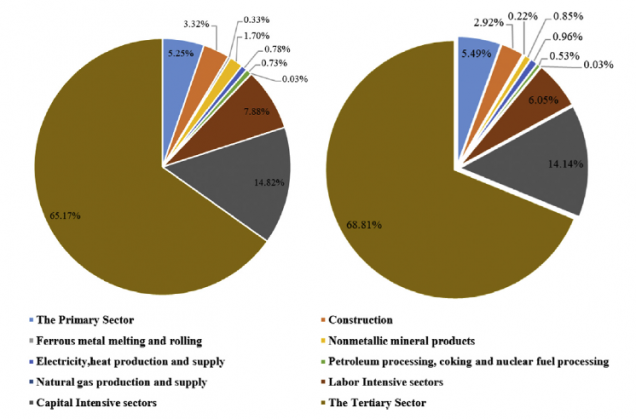 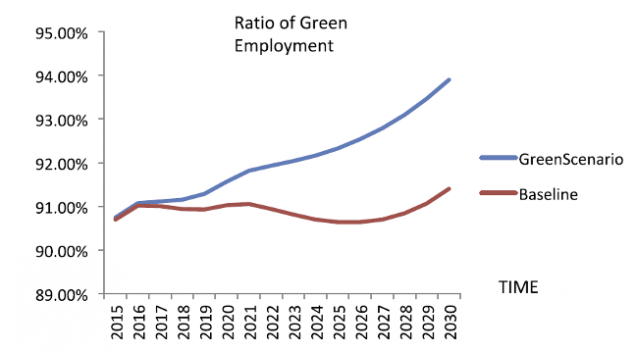 Policy and Climate Implications of a Green Transformation in China

The scenario analysis led to six major policy implications for a green transformation of China:

In summary, investing in human capital, such as education and health care, are key ways to reduce pollution, in addition to implementing structural reforms to transform industries toward climate-conscious activities.