Why is the International Monetary System Hierarchical? 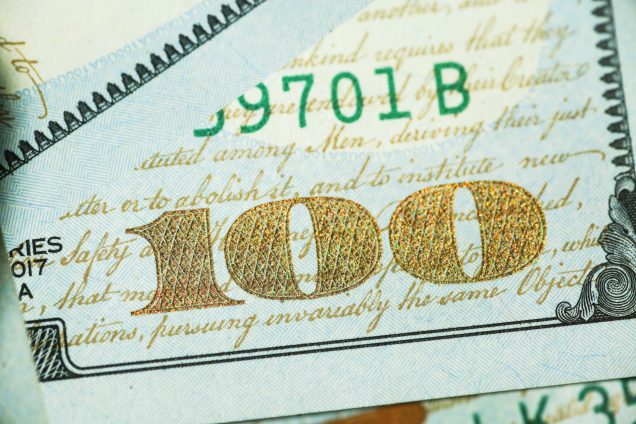 The view that the international monetary system is hierarchical has become increasingly common in International Political Economy (IPE) scholarship. Yet the nature, shape, and origin of this hierarchy often remain vague, as assessments vary considerably based on the analytical starting point. For example, is it a hierarchy of currencies, states, or monetary jurisdictions? What determines hierarchy empirically? And what are its causes?

A recent study published by Boston University’s Global Development Policy Center and co-authored by Steffen Murau, Fabian Pape and Tobias Pforr seeks to address this issue by focusing on the mechanisms by which countries can access emergency US-Dollar (USD) liquidity in times of crisis. It is the first publication that systematically integrates swap lines, the Federal Reserve’s repo facility and the Special Drawing Rights system into a single framework of interlocking balance sheets.

The study approaches the international monetary system as a world-spanning payments system in which daily money flows are settled mainly through interactions of private financial institutions.

As shown below in Figure 1, the USD dominates global transactions across markets and between actors outside of the United States itself, “offshore.” Therefore, we refer to the contemporary setup of the international monetary system as the Offshore US-Dollar System.

Figure 1—The Degree of Dollarization in Non-US Monetary Jurisdictions

In absence of a crisis, private USD-denominated credit money creation is sufficient to manage international payment flows in the Offshore USD System. This means that private financial actors create and settle credit without having to use public backstops. Yet, as private credit creation is always also a bet about the viability of future income streams, the system has a tendency to implode endogenously, for example when economic agents take on excessive risks or economic circumstances change such as in a global pandemic—a fact that has become known as the Financial Instability Hypothesis, named after the economist Hyman Minsky. During a larger crisis, credit provision by private institutions tends to dry up, leaving only public institutions available for filling the funding needs of private financial actors.

The inherent instability of credit is particularly dangerous for global actors that transact in USDs rather than their domestic currency. By incurring foreign currency liabilities, these actors take on liquidity risks that their domestic central banks can only backstop to a very limited extent—for instance, by drawing down their existing public foreign exchange reserves. The only public institution that can guarantee a sufficient supply of USD is the Federal Reserve (Fed).

The hierarchy of the international monetary system results from the difficulty that all other monetary jurisdictions have in accessing the balance sheet of the Fed in times of crisis. Currently, three different mechanisms exist for non-US central banks to access the Fed’s balances sheet to attain emergency USD liquidity. These create three peripheral layers in the Offshore USD System.

The first-layer periphery can access the Fed’s liquidity swap lines. With this mechanism, set up in its current form during the 2007-9 Financial Crisis, the Fed stands ready to create new USD-denominated central bank deposits on demand, while accepting deposits of the partnering central banks as collateral, which are denominated in their respective unit of account. Access to these swap lines is reserved for an exclusive ‘club’ of advanced economies and a few emerging market economies: the Fed only grants swap lines to 14 counterparties. At the core of these arrangements is a standing swap network, which comprises of the Fed, the European Central Bank, the Bank of Japan, Bank of England, Bank of Canada, and the Swiss National Bank. In times of crisis, the Fed has extended these lines to a select group of further counterparties, including the central banks of Brazil, Mexico, South Korea, and Singapore. Figure 2 below provides an overview of the volume and price of the Fed’s swap lines since the global financial crisis. 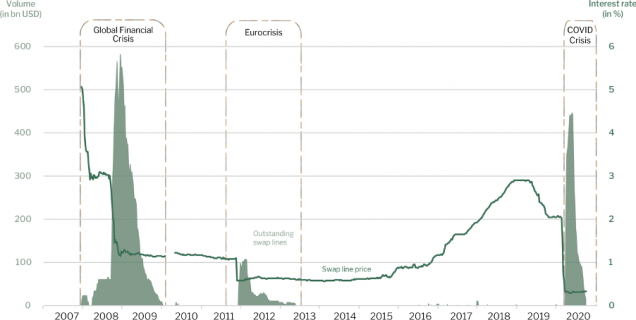 The second-layer periphery can make use of the Fed’s new repo facility for Foreign and International Monetary Authorities (FIMA) to access emergency USD liquidity. Set up in March 2020, the Fed creates new central bank deposits on the spot against US treasury bonds as collateral. Though this new facility has so far only seen relatively little use, it can be considered a ‘second-best swap line.’

Unlike swap lines, in which central banks pledge their own currencies as collateral, the FIMA repo facility requires central banks to pledge previously attained US treasury bonds as collateral. For the Fed, this adds a safety mechanism. In case of default on the loan, it is not left with a (potentially worthless) foreign currency, but with US sovereign debt. This arrangement has allowed the Fed to open up the FIMA repo facility to all foreign monetary authorities. For foreign authorities, however, the use of the facility is limited by the amount of US treasury bonds in their portfolio. While there is no public data on the holdings of US treasury bonds by individual non-US central bank, Figure 3 below presents an overview of the aggregate holdings of US securities holding by all non-US central banks.

Non-US central banks without access to swap lines and without sufficient US treasury bond holdings constitute the third-layer periphery. The standing public mechanism that remains available to them to access emergency USD liquidity is the Special Drawing Rights (SDR) system, set up in 1969 and administered by the International Monetary Fund (IMF). Even though it was not initially intended for this purpose, the SDR system allows channelling USD liquidity in between central banks across monetary jurisdictions.

The Fed only participates indirectly in the SDR system, the Exchange Stabilization Fund (ESF) acts as its gatekeeper. Non-US central banks can sell previously allocated SDR holdings to the ESF. New central bank deposits are only created if the Fed buys SDR Certificates issued by the ESF. This option is a barely used last resort mechanism. The main channel used in practice to acquire USD liquidity is that central banks of the first or second-layer periphery swap SDR holdings for USD-denominated instruments held in their foreign exchange (FX) reserves to the third-layer periphery. Figure 4 below shows the amount of SDR holdings which are available for countries in order to receive emergency USD liquidity, should they wish to do so (SDR holdings of participants). The amount of SDR holdings which were actually used to access liquidity is shown by the line ‘SDR holdings drawn by participants.’ 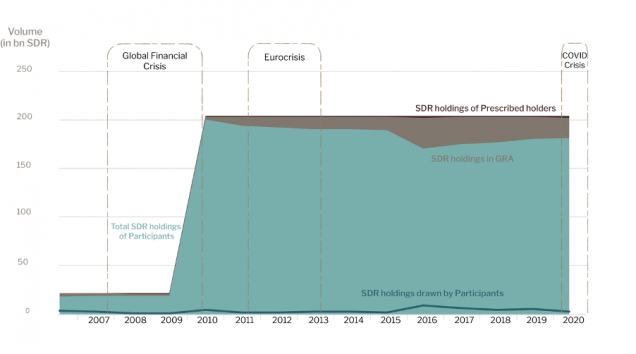 Contributions to the Literature on the International Monetary System

This research contributes to the literature on the international monetary system in three ways.

First, we clarify how hierarchy in the international payments system is actually manifested and also maintained. The root causes of this hierarchy are the paramount role of the USD and the different ways in which non-US central banks can access emergency USD liquidity in case of a larger crisis. It is important to appreciate that mechanisms for accessing emergency USD liquidity are not only significant when they are actually used in a systemic crisis. They also matter in normal times, as monetary jurisdictions higher up in the international hierarchy receive a more favourable implicit liquidity guarantee that grants a higher elasticity space to their payment systems. This becomes obvious if we compare the effective prices over time that non-US central banks would have to pay for emergency USD liquidity in each of the three mechanisms (see Figure 5 below).

Second, the research clarifies the functional relationship between the Fed and the IMF in the Offshore US-Dollar System. While we see the Fed as the hierarchically highest institution in the system, we interpret the IMF as an off-balance-sheet fiscal agency in the US monetary jurisdiction and attribute only a subordinate role to it. This is because the IMF ultimately has to rely on the Fed in order to make available newly created USD liquidity, which is distributed via the ESF. Hence, the IMF cannot act like another sovereign central bank and is entirely confined by the credit creation and provision of its member states. The IMF simply cannot create credit money on its own accord, which severely limits the role it can play in the global payment system.

Third, the analysis of the three mechanisms has the potential to contribute to different future strands of research. The insights we provide into the nature, shape and causes of international hierarchy are of relevance to the literature on the Global Financial Safety Net (GFSN), studies on the changing role of the IMF, analyses of the international role of the USD, as well as theories on international monetary power.

As the first publication to systematically integrate swap lines, the Federal Reserve’s repo facility and the Special Drawing Rights system into a single framework of interlocking balance sheets, this study elucidates the nature of hierarchy of the international payment system. The root cause of this hierarchy is the USD’s role as key currency which places the US monetary jurisdiction at the apex of the global payments system. The international hierarchy below the apex is determined by the mechanisms through which non-US central banks can access emergency USD liquidity from the Fed. Not only are they important when they are actually used in systemic crises, but they also matter in normal times. Peripheral monetary jurisdictions which are higher up in the international hierarchy receive a more favorable implicit liquidity guarantee that grants a higher elasticity space to their banking systems and provides them with a competitive advantage.

Steffen Murau is a Postdoctoral Fellow at the Global Development Policy (GDP) Center of Boston University, a research fellow in the Monetary and Economic Department at the Bank for International Settlements (BIS) in Basel, and an affiliate scholar at the Institute for Advanced Sustainability Studies (IASS) in Potsdam. His research interests include monetary theory, shadow banking, the international monetary system and the European Monetary Union. Among others, he has published in the Journal of Institutional Economics, the Review of International Political Economy and the Journal of Common Market Studies.

Fabian Pape is a Doctoral Fellow in Politics and International Studies at the University of Warwick. His research interests include monetary theory, central banking, and the institutional configuration of money markets. Most recently, he has co-edited a special forum on critical macro-finance in the Finance and Society journal. His research is funded by the UK Economic and Social Research Council.

Tobias Pforr is a Research Fellow at the Robert Schuman Centerr for Advanced Studies at the European University Institute (EUI) in Florence and a visiting fellow at the University of Warwick. His research interests include monetary theory, financial crises and climate change adaptation. He has previous professional experience in banking and financial markets and has worked with a number of international organizations such as the UN World Food Program, the Red Cross Red Crescent Societies, the German Red Cross, and the Overseas Development Institute.