While China’s economic performance has been remarkable since reform and opening in the late 1970s, real GDP growth slowed down in the aftermath of the global financial crisis and never recovered its pace.

In a recent presentation as part of the Spring 2021 Global China Research Colloquium, Marialuz Moreno Badia, Deputy Chief of the International Monetary Fund’s (IMF) Fiscal Affairs Department, examined the impact of fiscal decentralization on China’s economy. During her talk, Moreno Badia summarized her recent work with Yuheng Zhao and Raphael Lam and discussed how local government’s funding gaps may have reduced allocative efficiency and productivity in China.

China’s economic growth accelerated in the period between the late 1990s banking crisis and the global financial crisis. Scholars argue that one main driver was massive investments in physical capital, but total factor productivity growth, a measure of how efficiently economies convert inputs into outputs, was also important. When industries become more efficient in allocating their physical capital, they have increasing returns and growth without requiring additional inputs.

After 2008, however, there is a notable decline in the growth rate, as seen in Figure 1 below. 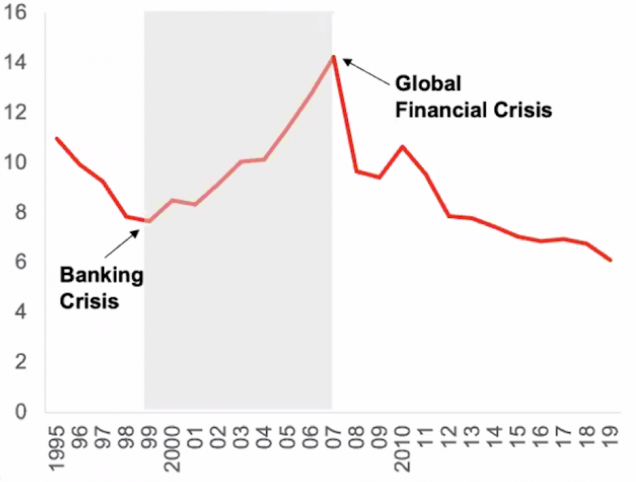 While much of the decline is cyclical in nature and can be explained by global economic factors, structural factors within China have also played an important role. In particular, total factor productivity in China has declined by a factor of three since the global financial crisis. Moreno Badia’s research set out to see what design features of the fiscal decentralization system in China may have an impact on allocative efficiency.

Paradoxically, China is the most de-centralized economy in the world in terms of spending, with local governments responsible for nearly 85 percent of general government budgetary spending, yet they are relatively centralized in regard to tax revenue. Local governments collect approximately 60 percent of taxes, but they have very little discretion regarding tax rates or tax bases.

In 1994, China reformed its tax system and centralized tax revenues, yet most public spending remained the responsibility of local governments. This policy change led to a widening of fiscal deficits across provinces and large vertical imbalances (the gap between local government’s own revenue and local expenditure), which have increased in almost every province over time, as seen in Figure 2 below. 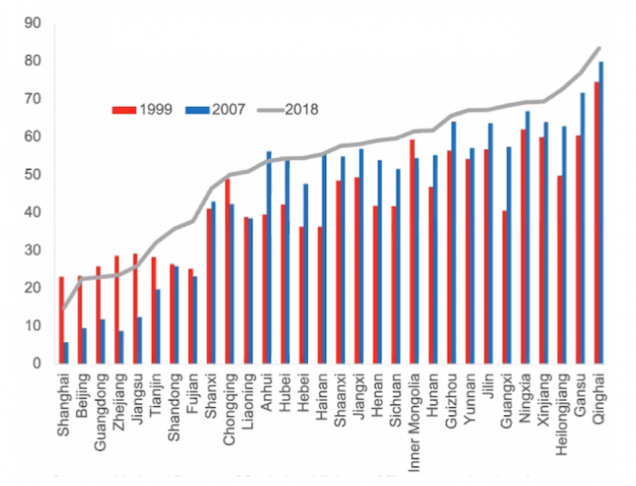 Moreno Badia and her team used firm level data to construct a metric of allocative efficiency and examined whether the degree of fiscal decentralization and the size of a locality’s funding gap may have an impact on it. They also controlled for policy distortions, market imperfections and several other factors that may explain differences of allocative efficiency between provinces.

They found large differences in levels of efficiency across provinces. These differences generally increased over time, with the most efficient provinces located along China’s east coast, as seen in Figure 3 below. 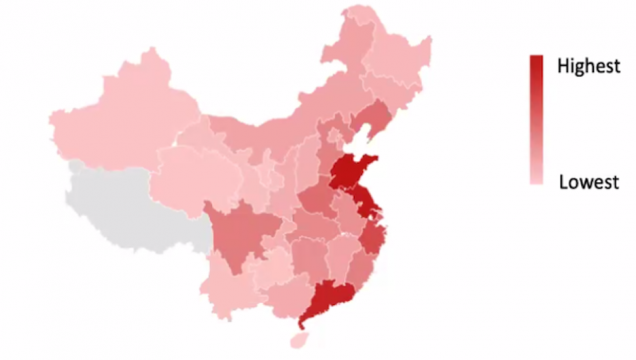 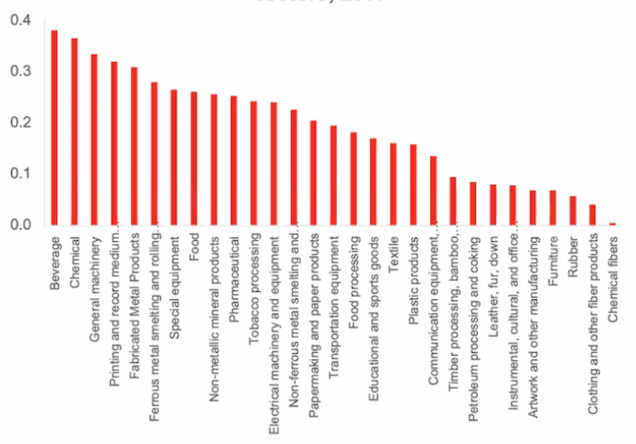 Notes: This figure plots for each sector the ratio of the average TFPR for the least efficient province relative to the most efficient one.

It is clear that funding gaps caused by fiscal decentralization lead to a massive divergence in provincial allocation efficiency outcomes, but what mechanisms can explain this phenomenon? Moreno Badia highlighted two key mechanisms: financial constraints and land market distortions. When faced with large vertical imbalances, local governments primarily have two ways to generate funds to provide services. They might resort to the financial market, which crowds out the corporate sector, or use the land market as a source of revenue. Both approaches will create market distortions and reduce resource allocation efficiency.

Moreno Badia found that firms operating in provinces with higher vertical imbalances are more sensitive to the availability of cash when making their investment decisions. These firms only make investments when they have adequate cash available, suggesting they are financially constrained.

This finding applies to State Owned Enterprises (SOEs) and non-SOEs alike. In general, SOEs face fewer financial constraints than non-SOEs. However, in provinces with high fiscal imbalances, both types of enterprise faced constraints in sectors such as food processing, textiles, and pharmaceuticals. This shows that financial constraints are real and closely related to local government funding. The literature has shown that such financial constraints can generate large productivity losses, suggesting this could be an important distortion created by the fiscal decentralization system.

Local governments can lease land as an additional source of funding. There are three types of land in China: industrial, residential, and commercial. Industrial land is generally leased at lower prices to attract investment, but this makes providing industrial land relatively less profitable to local governments. Moreno Badia examined 192,000 land transactions and found that the price of industrial land relative to commercial or residential land is higher in provinces with large vertical imbalances. These price distortions in the land market can influence the entry and exit of firms, which may result in a decrease in resource allocation efficiency.

In addition to previously studied factors that explain resource misallocation, Moreno Badia concluded that fiscal decentralization and the dramatic gap between local government spending and revenue plays an important role in China. The misallocation varies extensively across provinces, and she noted that to reduce these inefficiencies, China needs to re-examine the design of the fiscal decentralization system.