2020: A Point of Inflection in the China-Latin America Relationship? 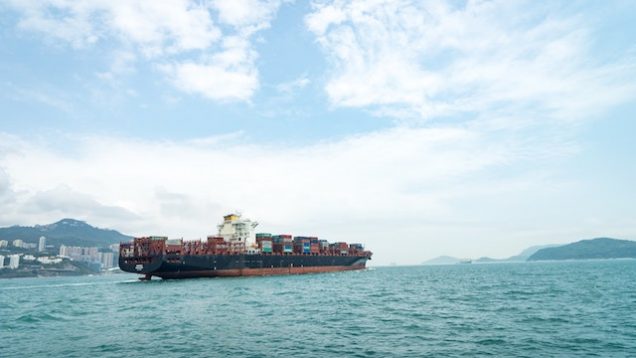 2020 was a possible inflection point in the economic relationship between Latin America and the Caribbean (LAC) and China.

According to joint research from Boston University’s Global Development Policy Center and the Inter-American Dialogue, last year, for the first time since 2006, China didn’t offer any new financing commitments to LAC governments through its two main lenders, the China Development Bank (CDB) or Export-Import Bank of China (CHEXIM).

However, this drop in financing doesn’t necessarily signal the end of the relationship, but rather a transition towards engagement that is more focused than ever on a few core sectors: infrastructure and commodities, as shown by the Global Development Policy Center’s 2021 China-Latin America Economic Bulletin.

The research shows that despite there being no new loans, Chinese firms invested more than ever in LAC infrastructure, particularly in the electricity distribution sector, and China’s trade demand for LAC commodities continued to grow, despite China’s commitment to return to buying agricultural goods from the United States. And while international aid has not traditionally been a major part of the China-LAC relationship, COVID-19 changed that: China sent LAC $214 million in healthcare assistance in the form of cash and equipment.

CHINA-LAC DEVELOPMENT FINANCE: A YEAR WITH NO NEW LOANS

Two policy banks – the CDB and CHEXIM – traditionally comprise the vast majority of official Chinese finance to LAC. However, as Figure 1 shows, in 2020, for the first year since 2006, neither bank finalized any new loans or credit lines with LAC governments.

One major loan package remains in negotiations: a credit line for Ecuador, in exchange for 154 million barrels of oil, co-financed by the CDB and the Industrial and Commercial Bank of China ( ICBC), for a total of $2.4 billion. This deal was first announced in the summer of 2020, but has not yet been signed as of February 2021. 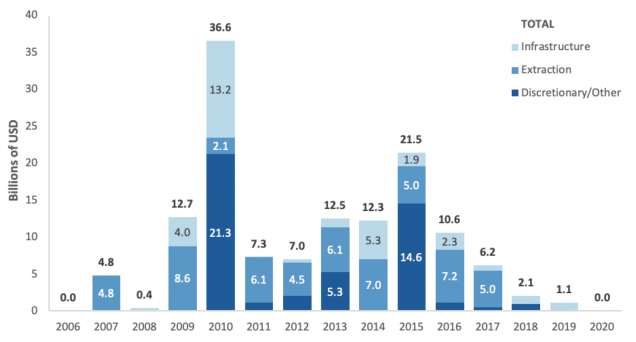 Instead, attention in 2020 turned to renegotiations of existing debts. As Figure 2 below shows, most LAC countries have public and publicly guaranteed (PPG) debt levels below 50 percent of GDP and have received less than 20 percent of yearly GDP in loan commitments from CDB and CHEXIM since 2008, the end of the last regional business cycle. 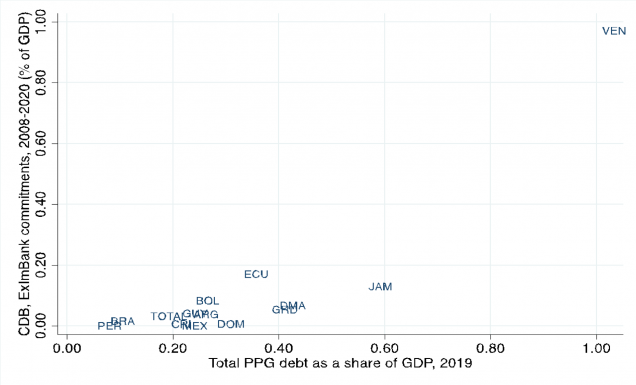 Venezuela stands out, followed at a great distance by Ecuador and Jamaica. Ecuador in particular has been at the forefront of debt renegotiations with China. In 2020, it successfully negotiated the suspension of $891 million in payments to CDB and CHEXIM through mid-2021.

FDI projects can arrive in one of two avenues: new “greenfield” projects, or mergers and acquisitions (M&A) deals, the acquisition of, or merger with, existing projects. Greenfield (GFDI) projects often take years to occur after the announcement itself, while M&A deals are one-time purchases that have already taken place. Thus, each avenue has been looked at separately in the Bulletin.

However, Chinese M&A deals in LAC actually rebounded, from $4.3 billion in 2019 to $7 billion in 2020. They were almost entirely concentrated in one sector: electricity infrastructure. Three major electricity-sector deals in Peru and Chile were finalized, totaling $6.8 billion, while another $5.0 billion deal was announced at the end of the year and is still pending.

While several of these large deals involved Western investors selling off their LAC assets, they were all first announced in the fall of 2019, amid the slow growth that LAC had seen even before the pandemic hit. Most of these deals involve sales by US-based Sempra Energy, which announced in 2019 that it intended to sell off its South American assets to concentrate on its home market of North America. Notable deals finalized in 2020 included the following:

LAC-China merchandise trade stayed almost perfectly flat in 2020. This is noteworthy in itself, as LAC GDP fell by over seven percent in 2020, according to IMF estimates, losing a decade’s worth of growth, and regional merchandise exports fell overall. Nonetheless, because of steady trade with China amidst such steep economic decline, LAC’s merchandise trade flows with China grew to record high levels in regional GDP.

Contributing to LAC-China exports’ resilience was China’s growing demand for LAC commodities, particularly foodstuffs like beef and soy, as Figure 3 shows. China’s demand for these LAC products accelerated in 2017, when China imposed penalties on US agricultural goods amid the US-China trade tensions. The 2020 “Phase One” trade deal between the US and China was expected to reverse this trend, but research by the Peterson Institute for International Economics indicates that China’s demand for those US commodities has not rebounded as anticipated. In fact, China’s imports of US agricultural goods have only reached about two-thirds of their commitments under the deal. It is therefore not surprising that China’s imports of beef and soy from LAC continued to grow in 2020. 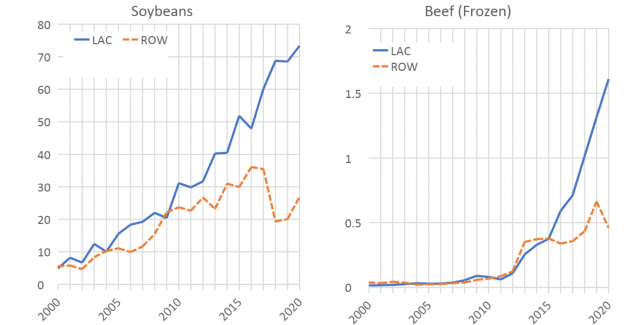 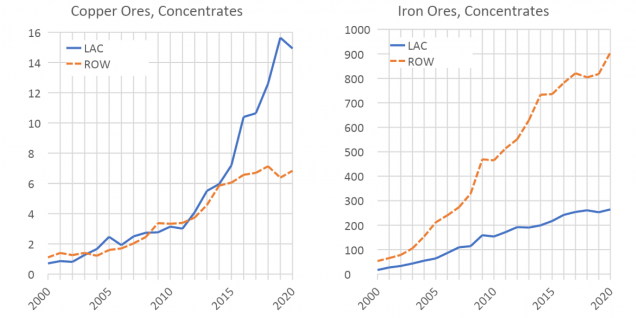 Aid has not traditionally made up a major part of the China-LAC relationship, but with Latin America facing one of the worst tolls from COVID-19 and the greatest economic downturn in the world, China responded with $214 million in healthcare equipment and cash donations.

Aid to the region has been unevenly distributed, centered particularly in Venezuela and Cuba, as Figure 4 shows. By total value, aid to Venezuela has far outpaced aid to other countries in the region, totaling over $100 million. Venezuela’s aid per COVID-19 case also dwarfs that of other Latin American countries, with $870 worth of supplies received per case, compared to the median for the region, $7.17 per case. The only other country in the region with aid per case exceeding $50 is Cuba, at $130 per case. Figure 4 illustrates the regional variation in donations and includes the total value of in-kind donations and cash donations from all Chinese contributors.

In 2021, the focus has turned to vaccine production and distribution, after completion of clinical trials with Sinovac in Brazil and Chile, Sinopharm in Argentina and Peru, and both CanSino and Walvax in Mexico. Sinovac is manufacturing 100 million doses of its CoronaVac in Sao Paulo and distribution has begun in Brazil and Chile. Peru began distribution of 300,000 doses of Sinopharm’s vaccine in February 2021. Mexico has approved the single-dose CanSino vaccine and ordered seven million doses. 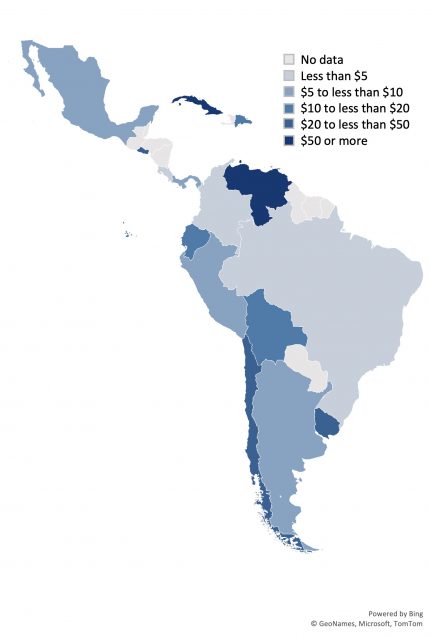 OUTLOOK FOR 2021 AND BEYOND

While 2020 saw significant reductions in Chinese development finance and new GFDI projects in LAC, there are important signs that they may rebound in 2021.

In terms of finance, Ecuador ended 2020 still in negotiations for a loan package with CDB and ICBC. If the package is finalized in 2021 in its current form, it will bring in $1 billion in finance from CDB and $1.4 billion from ICBC. In addition, COVID-19 engagements are also likely to shift toward finance. In 2020, China offered up to $1 billion in loans to LAC to support purchases of Chinese- manufactured vaccines. As of February 2021, no countries have accepted this offer yet, but as LAC vaccine deployment is still in its early stages, it is likely to be used in the coming months.

Investment may rebound in 2021, as well. For example, Argentina and China have begun negotiating a $30 billion package of investment plans across 15 key infrastructure and energy projects in Argentina. Several of the projects associated with this package have been frequent features of Chinese cooperation in the past, including the San Martín, Roca, and Belgrano Cargas rail lines. Over the coming months, these projects may return to the fore.

Trade is likely to see the effect of continued volatility in metals prices as the world economy rebounds and the effect of China’s stimulus on construction recedes. Although metals prices rose in 2020, the Economist Intelligence Unit and the World Bank expect the price of iron to decline again in the coming years, while the outlook for copper is somewhat more optimistic. Soybean and petroleum prices are expected to rise moderately, but remain well below their peak levels of the last decade.

Additional trade volatility may come in the form of China’s choice of source country for soybeans and beef. If China fulfills its commitments under the “Phase One” deal with the US, it would entail significant cutbacks in demand for South American soybeans. However, the Argentina-China investment deal currently in negotiation is reported to include a $3.8 billion investment in pork farms, which could eventually raise Argentina’s pork exports by $2.5 billion.

Despite the drop in new financing agreements, the economic relationship between China and LAC seems to be pivoting toward focusing on strategic sectors, rather than simply slowing altogether. All eyes will be watching the summit between China and the Community of Latin American States (China-CELAC) tentatively scheduled for later this year, to point the direction for the relationship after this last year of inflection.

Read the Bulletin
Tweets by GDP_Center