TRIPping Up: Why Global Access to the COVID-19 Vaccine Lies with the WTO 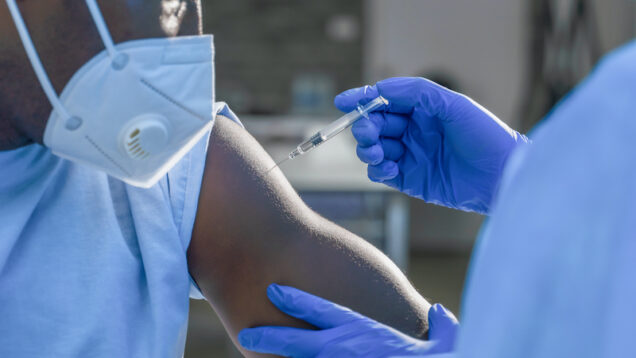 The webinar came at a particularly timely moment. While there has been international consensus on the need to ensure rapid, equitable rollout of the vaccine globally, the current solutions on offer are not yet meeting these ambitions.

The COVAX facility is a donor-driven effort to procure 2 billion vaccine doses, but is underfunded and has so far only reserved 700,000, while wealthy countries have secured 6 billion doses for themselves. Meanwhile, the WHO’s proposed COVID-19 Technology Access Pool (C-TAP) offers a more promising route by creating a patent pool of IP, technologies and data, but it has been shunned by the major drug companies with the most promising vaccine candidates. The disparity in access is visible in Figure 1, below:

Figure 1: Rich Countries will Get Access to Coronavirus Vaccines Earlier than Others 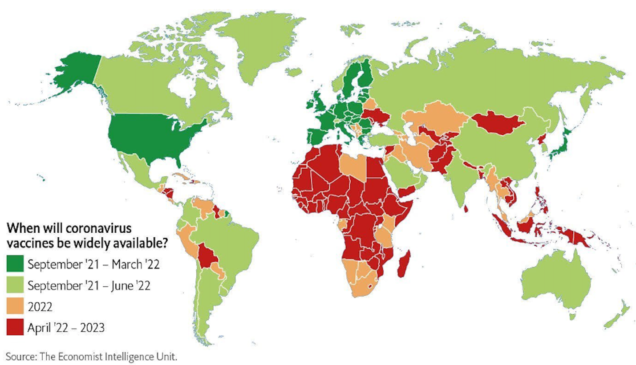 Source: ‘Rich countries will get access to coronavirus vaccines earlier than others,’ The Economist Intelligence Unit, 18 December 2020.

A more direct path to a rapid and equitable rollout of the vaccine would be to waive the specific intellectual property rights (IPRs), which hold back wider manufacture. South Africa and India have been spearheading an initiative at the WTO Trade-Related Aspects of Intellectual Property Rights (TRIPS) Council for a Waiver on COVID-19 vaccines and related technologies, gaining co-sponsorship with Kenya, Eswatini, Mozambique, Pakistan, Bolivia and broad support among the majority of WTO members.

The GDP Center’s Working Group on Trade and Access to Medicines, joining with a broader civil society effort toward rapid and equitable vaccine access, recently initiated a joint letter in support of the TRIPS Waiver, signed by around 100 experts and industry leaders to send to WTO Missions.

However, wealthy countries, home to the pharmaceutical companies who benefit from the strict intellectual property regime continue to block the effort, leading to a stand-off between poor and rich WTO members. Figures 2 and 3 below show that the countries blocking the Waiver are the same that stand to gain the most from the status quo:

Figure 2: Countries that Support or Oppose the COVID-19 TRIPS Waiver

What do the experts say?

Dr. Mustaqeem de Gama, part of the team that initiated the Waiver at the South African WTO Mission, spoke at the webinar. Dr. de Gama began by explaining how international rules on trade and investment stretch deep into domestic policy agendas, constraining the ability of governments to act in the public interests for fear of WTO disputes or Investor-State disputes, even when policies will save lives. While there is ongoing work to explore existing flexibilities and to pursue initiatives that widen policy space during emergencies, none of these get to the root cause of vaccine inequality. To this end, Dr. de Gama concluded that pursuing the TRIPS Waiver, which includes a Peace Clause on COVID-19 emergency measures, is a more comprehensive package to ensure adequate policy space.

Dr. Deborah Gleeson agreed the existing regime is not suited for vaccinating 7.8 billion people at speed. Dr. Gleeson further stated that the TRIPS Agreement, binding for all WTO members, mandates monopoly rights, excluding potential competitors from the market, while driving up prices. The so-called flexibilities within the Agreement have proven to be too time-intensive to be useful in emergencies. Recent bilateral and plurilateral agreements indeed go even further than TRIPS (TRIPS+), often including data exclusivity, which prevents the crucial sharing of trial data, and creates a further barrier to access. The complexity of the COVID-19 vaccine means it is not enough to just override the patent, but will require sharing detailed knowledge of the process and technologies. All of this leads to one conclusion: support the TRIPS Waiver.

Beyond TRIPS, Dr. Gleeson suggested turning attention to provisions outside the intellectual property regime that may prevent access, for example Investor-State Dispute Settlement (ISDS), present in many international investment agreements, which enables foreign investors to contest government policies and laws at international tribunals. The cost of fighting can deter countries from taking actions, even issuing compulsory licenses – one of the few so-called flexibilities granted by TRIPS rules. This is further undermined by rules which prevent support for domestic industries over foreign entities. Moreover, though mandatory government disclosure allows pharmaceutical companies to intervene in democratic decision-making, those same companies are not held to the same standards of transparency and often hide huge public funding support, while charging what they like for the products.

He raised the challenge of almost 100 export bans and restrictions on COVID-19-related products and medical supplies as an example of how our current trade regime has been ineffective at supporting a globally-coordinated response to the pandemic. While these bans are beginning to be lifted, they highlight how unilateral measures in global emergencies can exacerbate the health and economic crisis by disrupting supply chains, depressing production and misdirecting scarce resources. Instead, strong international cooperation could ensure supplies are directed to where they are needed most.

At the same time, many countries are continuing to pursue free trade agreements against warnings from civil society, for example the US-Kenya and EU-Indonesia agreements, which are likely to involve TRIPS+ provisions. Unilateral decisions can help in part, such as South Africa’s decision to end all bilateral investment treaties it had signed with EU countries and replace them with provisions that are subject to the South African constitution and domestic courts.

Dr. Martin Howell Friede took a different approach and argued that the bottleneck on the vaccine was driven by production, not intellectual property rights, and made the case that the Waiver would not overcome the problem of supply.

In essence, he argued that even if the TRIPS Waiver was passed, the complex manufacturing required to develop the vaccine wouldn’t yet exist in developing countries, and so the issue of under-supply would persist. Further, there is little incentive for pharmaceutical companies to share valuable patents, technologies and trade secrets which risk supporting a future competitor. Instead, he advocated that now should be the time to prepare for the next pandemic, by strengthening infrastructure to respond in the future.

Dr. Carlos Correa pointed out, however, that this was precisely the issue: that maintaining IPRs props up existing monopolies and essentially undermines the development of domestic industries in Emerging Markets and Developing Economies (EMDEs). Without technology transfer, there is no absorption capacity, and the problem will persist, so it is crucial to find ways to enforce transfers.

Further, it is inaccurate to say that production wouldn’t increase with the Waiver, since many of the products involved in the vaccine’s manufacturing process are already produced in Bangladesh, and there are a number of countries that could produce viable COVID-19 vaccines, if they were given patents.

Dr. Correa went on to speak more broadly of the challenges facing the WTO, where the suggestions for reform initiated by wealthy countries pose a threat to the institution’s multilateral nature. This would include new disciplines and the dilution of Special and Differentiated Treatment for developing countries, despite the very obvious rationale for their maintenance in the current global economic crisis.

At the end of the day, however, reform is more pressing than ever. The WTO’s essential function is to promote and protect free trade, which leaves little room for prioritizing the public interest, whether during a pandemic, or in the face of the global climate crisis. It is not adequate that decisions on vital public interest policies remain at the mercy of interpretation in tribunals.

Considering the present historic moment, Dr. Correa and colleagues called for comprehensive action on the shortcomings of the WTO as the only credible solution, which must be advanced by social movements and political actors alike.

The efforts behind the TRIPS Waiver, from WTO missions and medicine access campaigners, must be accelerated and multiplied in the coming years to transform the WTO in service of achieving the 2030 Sustainable Development Goals and addressing the grave threat of climate change. Without finding solutions to these problems, the reality is that asymmetries will only grow starker.

In the immediate term, the TRIPS Waiver must be urgently secured. While a decision on the Waiver at the General Council was delayed last week, 2021 will see fresh opportunities to demand wealthy countries stop protecting corporate monopolies, and start putting the health and safety of people first.