Debt Relief for a Green and Inclusive Recovery 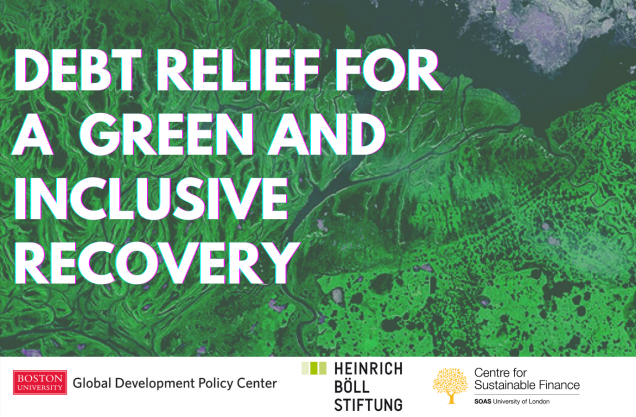 In a new report, the Global Development Policy Center outlines an ambitious new proposal for comprehensive debt relief that includes the private sector and middle-income countries, in an effort to jump start a green and inclusive recovery from COVID-19. The report, summarized below, is produced in partnership with the Heinrich Böll Stiftung and the Centre for Sustainable Finance at SOAS, University of London.

The COVID-19 crisis is the biggest threat to human prosperity in close to a century. Many emerging markets and developing economies are facing grave difficulties in obtaining the fiscal space to combat the virus, protect the vulnerable, and mount a green and inclusive recovery. Not only has the global economic slowdown hampered the ability of many developing nations to mobilize resources, many are using 30 percent to 70 percent of what little government revenue is coming in to service debt payments. This report calls for a global debt relief effort to grant emerging markets and developing countries in need the space necessary to fight the virus and put together a green and inclusive recovery.

The Group of 20 (G20) were swift to act in the early months of the crisis by establishing the Debt Service Suspension Initiative (DSSI), which is now suspending debt service payments for a group of low-income countries through the first half of 2021. However, the standstill under the DSSI is merely providing some breathing space, but it does not address the core problems: It does not lead to a net reduction of debt, and it does not involve private creditors, who are holding large chunks of developing-country debt. Although it was an important first step, the G20 now recognize that, as the crisis has worsened, there is a need to go beyond the DSSI.

This report calls on the G20 to move beyond the DSSI and require all creditor groups to provide substantial debt relief – not just suspension – to a broad set of low- and middle-income countries in need in exchange for a commitment to use some of the newfound fiscal space for a green and inclusive recovery. Without a resolute global debt relief effort, the goals set out by the international community in the 2030 Agenda for Sustainable Development and the Paris Agreement on climate change will not only be missed, but the progress made to date will be lost.

In November 2020, the G20 has rightly come to the realization that debt suspension will not be adequate for a number of countries, and put forward a “Common Framework for Debt Treatments beyond the DSSI.” This proposes a reduction in overall debt levels on a case by case basis for those DSSI countries deemed to have unsustainable debt. This move is yet another welcome step in the right direction by the G20 but falls short on three counts. First, there are a number of middle income countries, including small island developing states, that may experience unsustainable debt that should be eligible for relief. Second, the G20’s new framework still lacks a mechanism for meaningful private creditor involvement and fails to address the first-mover problem for participating nations. Third, the new framework lacks a commitment by creditors and debtor countries alike to align newfound fiscal space with globally shared climate and development goals.

This crisis wracked the world economy just as it was ambitiously mobilizing trillions of dollars annually to meet ambitious development goals and put the global economy on a path to decarbonization by mid-century. It is not an option to put these goals aside as we attempt to recover from the pandemic. Rather, they have to be put at the center of the recovery effort. The lack of attention to our development goals and to climate change was already triggering social strife and leading to major economic costs before the pandemic. A piecemeal approach to dealing with the current debt problems will not suffice. This is a systemic problem, and we need a global and systemic response. The international community and the G20 in particular need to agree on an ambitious agenda for tackling the debt crisis and providing countries with the fiscal space for sustainable crisis responses.

This report calls on the G20 to move beyond its new Common Framework for Debt Treatments and require all creditor groups to provide substantial debt relief to a broad set of low- and middle-income countries in need in exchange for a commitment to use some of the newfound fiscal space for a green and inclusive recovery. A piecemeal approach to dealing with the current debt problems will not suffice. This is a systemic problem, and we need a global and systemic response. The international community and the G20 in particular need to agree on an ambitious agenda for tackling the debt crisis and providing countries with the fiscal space for sustainable crisis responses.

The G20 need to be bold, and they need to act now. Past experience tells us that delaying the response to debt crises leads to worse outcomes and higher costs. Doing too little, too late will be costlier, for both debtors and creditors. The international community only agreed to a comprehensive initiative – the Heavily Indebted Poor Countries (HIPC) Initiative – after more than two decades of repeated piecemeal debt rescheduling and progressively increasing debt reductions. Postponing inevitable sovereign debt restructurings caused prolonged underinvestment in health, education, and infrastructure, and it resulted in lost decades with increased unemployment and poverty for the mostly African and Latin American countries suffocated by debt.

A new architecture is needed to provide debt relief, while ensuring that the relief is calibrated towards attacking the virus, protecting the vulnerable, and staging a green and inclusive economy.

To this end, the authors propose a “Debt Relief for Green and Inclusive Recovery Initiative” as an ambitious, concerted, and comprehensive debt relief initiative – to be adopted on a global scale – that frees up resources to support recoveries in a sustainable way, boosts economies’ resilience, and fosters a just transition to a low-carbon economy. Our proposal consists of three pillars and aims at achieving maximum creditor and debtor participation.

Three Pillars of Debt Relief for a Green and Inclusive Recovery 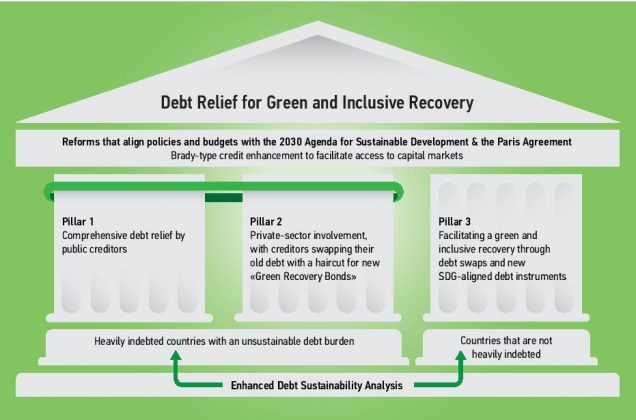 Source: Debt Relief for a Green and Inclusive Recovery, 2020.

Under Pillar 1, comprehensive debt relief would be granted by public creditors to eligible heavily indebted countries with an unsustainable debt burden – analogous to, but improving upon, the HIPC Initiative model. These countries would receive debt relief on their bilateral and multilateral debt in order to provide the fiscal space for investment in health and social spending to fight the pandemic and in climate adaptation. Governments receiving debt relief would need to commit to reforms that align their policies and budgets with the 2030 Agenda for Sustainable Development and the Paris Agreement.

Debtor countries that seek bilateral haircuts will be required to seek commensurate relief from private creditors, and incentives need to be designed to ensure that private creditors grant such relief. Lending by multilateral development banks and humanitarian assistance will continue to flow, but on condition that it is not used to pay private creditors. Debt owed by multilateral institutions would only be  restructured for IDA-eligible countries. To safe-guard the preferred creditor status of multilateral institutions, their losses would need to be financed by bilateral contributions, the proceeds from gold sales, or the issuance of new Special Drawing Rights (SDRs).

Under Pillar 2, the same group of eligible countries would be granted debt relief by private creditors. Private creditors participating in the debt restructuring would swap their old debt holdings with a haircut for new “Green Recovery Bonds.” As in the case of the restructuring of publicly held debt under Pillar 1, a significant portion of the reduced debt service burden from the debt relief by private creditors should be used by the debtor government for spending on a green and inclusive recovery, and governments should commit to aligning their policies and public budgets with the goals of the 2030 Agenda for Sustainable Development and the Paris Agreement.

Under Pillar 3, the authors envisage debt-for-climate swaps for countries that are not heavily indebted, but have reduced fiscal space due to COVID-19. For these, such swaps would facilitate raising climate ambitions in the form of additional actions or investments in climate adaptation or mitigation. Moreover, this could be complemented by an incentive scheme for the issuance of (new) sustainability-aligned sovereign debt.

For any of these transactions, an independent third party would need to oversee the implementation and monitor the fulfillment of the government’s obligations under the arrangement and measure their impact.

The proposal is aimed at providing developing countries the fiscal space at a critical time to address the three crises they are facing: the health and social crisis, the debt crisis, and the climate and environmental crisis. The authors highlight climate action on mitigation and adaptation for three reasons. First, without reducing emissions and stabilizing our climate as well as investing in adaptation, all other efforts at development will be undermined and countries will find themselves in permanent crisis mode. Second, even if climate mitigation efforts are successful, large-scale investments in adaptation will be needed to protect people from the effects of the global environmental change that is already happening. It is important to emphasize that the effects of climate change will disproportionately harm the poor – scaling-up climate adaptation is also a matter of climate justice. Third, research has shown that greater climate vulnerability is increasing sovereign risk and the cost of capital, and hence undermining public finances. Therefore, investment in adaptation is a good investment and will contribute to future debt sustainability.

But to be clear, neither the efforts aimed at climate mitigation nor adaptation can be successful if the social dimension is ignored. Throughout this report, the authors stress it is crucial that the recovery be green, economically inclusive, and socially just. Debt relief needs to be coupled with policies that are aimed at a just transition. To ensure that the recovery is both green and inclusive, investments in sustainable infrastructure and targeted support of key industries are essential, alongside investments in people and innovation to ensure that such a transition generates full employment, decent work, and opportunities for new economic activity.

Debt relief has to be part of a broader agenda for enabling green and inclusive recoveries in countries around the world. A debt relief effort such as the one proposed should be coupled with a new and ambitious allocation of SDRs and significant new capital mobilized from development finance institutions. This will provide the fiscal space for emerging markets and developing countries to adopt sustained counter-cyclical responses to the crisis.

Countries share common but differentiated responsibilities in combating the climate crisis. Without large-scale debt relief and efforts aimed at facilitating a green and inclusive recovery, the international community can abandon its hopes of achieving the 2030 Agenda for Sustainable Development and the Paris Agreement. The lives and livelihoods of current and future generations hang in the balance.