How Trade Policy Failed US Workers – And How to Fix it 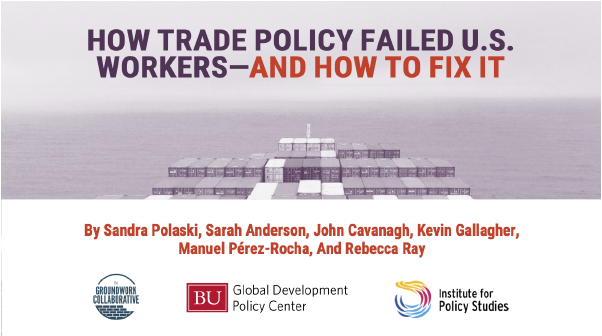 A new report from the Global Development Policy Center in collaboration with the Groundwork Collaborative and the Institute for Policy Studies examines U.S. trade policy and performance in the Trump and COVID-19 era.

The report examines U.S. trade policy prior to the pandemic and reveals an approach heavily focused toward the interest of the financial sector and large national corporations. Secondly, the authors review current U.S. trade agreements – including the new US-Mexico-Canada (USMCA) Agreement and the Trump administration’s current trade war with China – examining their impact on U.S. workers and the hard-hit states Ohio and Michigan.

Workers in hard-hit U.S. states have been devastated not only by years of pro-corporate trade policies, but also by policies that scapegoat China and other countries instead of providing real security to workers.

A more cooperative international approach based on guaranteeing rights for workers in all countries could remove incentives for employers to shift jobs to places where workers are less protected. And it could create larger domestic markets to sell goods and services in more countries, leading to more shared prosperity.

The authors note that, “In this time of crisis, we need a new trade policy more than ever to support an economic recovery from the pandemic and to start building an equitable economy that is resilient to future crises. A new policy must shift bargaining power away from corporations and towards working people to create an economy that works for everyone, not just special interests.”