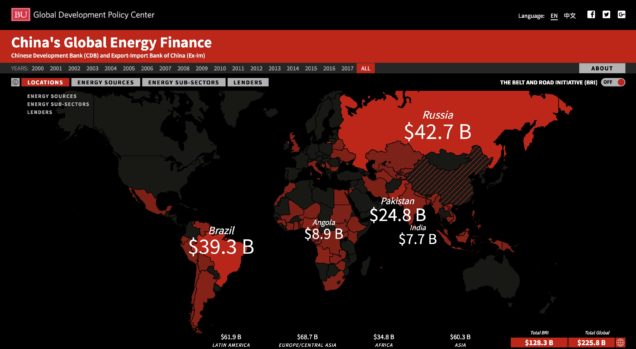 China’s two global policy banks—the China Development Bank (CDB) and the Export-Import Bank of China (CHEXIM)– are becoming the largest sources of energy finance for governments across the world.  In 2017, these banks provided upwards of $25.6 billion in energy financing, increasing the total amount of energy finance by China’s policy banks since 2000 to roughly $225.8 billion since 2000. While this represents a nearly 45 percent decrease from 2016 levels, the majority of 2017 financing was in power generation, with significant increases in hydroelectric power plants. Further, those nations currently designated to be part of China’s Belt Road Initiative (BRI) received 55.9 percent of total energy financing from China’s two global policy banks. Declines in development finance from the two Chinese policy banks are concentrated in significant reductions in extractive activities and transmission and distribution systems. What is somewhat masked in the 2017 data is that there has been an increase in the dollar amount of loans in the power sector, which almost tripled relative to 2016 and exceed the 2013-2016 average.

These estimates stem from an update to China Global Energy database— and interactive web portal created and published by the Global Economic Governance Initiative (GEGI) at Boston University— to include 2017 data. The China Energy Finance database allows those interested to search and display the overseas lending of the CDB and CHEXIM over time, across regions and within countries, and by type of energy source for the period 2000 to 2017. Another update to the interactive database for 2017 is the inclusion of an interactive BRI filter which allows the same interaction with the database and only BRI countries.

The China Development Bank (CDB) and the Export-Import Bank of China (Ex-Im) do not uniformly publish these data.  Since 2011, GEGI and other university-based research groups have been attempting to estimate the scope and characteristics of Chinese development finance in Africa and Latin America.  To our knowledge, this is the first attempt at a global estimate of China’s overseas energy finance.  Drawing on the early work of the China-Africa Research Institute (SAIS-CARI) at the Paul Nitze School of Advanced International Studies maintains and makes public a database on China-Africa Finance.  GEGI, along with the Inter-American Dialogue mimicked the SAIS-CARI methodology and publishes an inter-active China-Latin America Finance database.