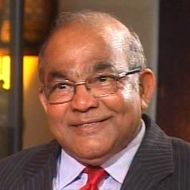 Former Reserve Bank of India Governor, Y V Reddy was the Chairman of the Fourteenth Finance Commission of India from 1st Feb. 2013 to 31st December 2014, a Constitutional body with the rank of Union Cabinet Minister.

During 2008-13, he has been active in academic arena, and was associated with University of Hyderabad, Indian Institute of Technology, Madras, and Columbia University, New York.

He served as a member of the United Nation’s Commission of Experts on Reforms of the International Monetary and Financial System. He was also on the Advisory Board of Institute for New Economic Thinking (INET).

He has written extensively on economic issues – particularly relating to fiscal policy, central banking, and the global crisis.