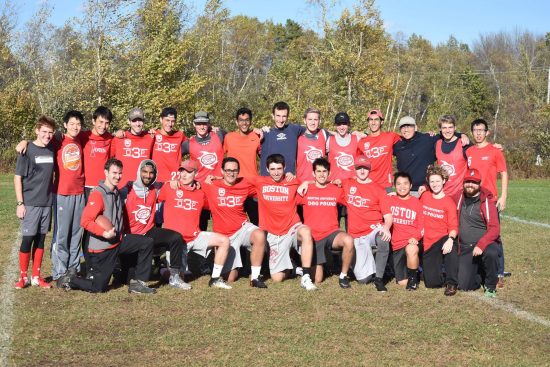 The Boston University Men’s Ultimate Club is a competitive club that competes year round in local, regional and national tournaments. Membership is open to students of any skill level. During the fall season, the team compete in local and regional tournaments. In the spring, the team has a more competitive schedule and travels to national tournaments throughout the country. The men’s season begins in September and ends after the Ultimate Player’s Association’s (UPA) College Championship Series in May. All members must commit to practices and tournaments. Practices are held three times a week with tournaments on the weekends.  The team participates in such tournaments as Huck-A-Hunk-O’-Burning-Pumpkin, Lemony Spring Tournament, and Autumn Sky Tournament.

Check out the team’s event center for their upcoming schedule and past results!

Interested in donating to the Ultimate Club? Please visit the Terrier Pride Online Gift Form and select “Friends of Men’s Ultimate.” All donations are tax-deductible and go directly to the club of your choice.