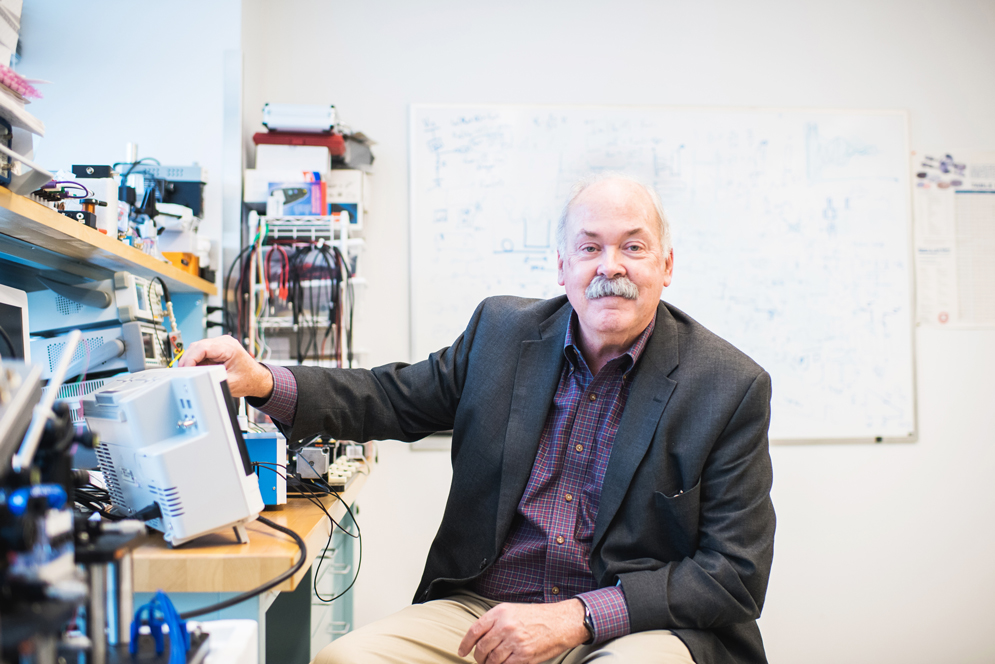 In the late 1990s, with an expected explosion in demand for internet bandwidth, the telecommunications industry was scrambling to devise switches that would rapidly transmit massive amounts of data—videos, music, photos, email.

David Bishop, a College of Engineering professor of electrical and computer engineering and head of the Division of Materials Science and Engineering, was then director of micromechanical research at Lucent Technologies Bell Laboratories. He proposed applying MEMS—microelectromechanical systems, at the time a relatively new technology—to create a set of micromirrors that could be used to construct an optical switch.

“Everyone thought he was crazy,” recalls another Bell Labs scientist, Bishop’s longtime friend and colleague Alice White, an ENG professor and chair of mechanical engineering. “But he convinced them to invest in the project.”

Using 256 micromirrors, Bishop and his team of mechanical and electrical engineers, physicists, and chemists built what was then the world’s largest optical switch, the Lambda Router. “We went from research prototype to shipped product in 18 months,” says Bishop. He holds US patents for 47 micromechanical inventions, and the Lambda Router is the centerpiece of the portfolio that helped him win election in December as a 2017 Fellow of the National Academy of Inventors (NAI).

“It’s just kind of like me and this gizmo are in the room together and only one of us is getting out of here intact,” says Bishop. “Who is it going to be? Nothing ever works the first time. Nothing ever works in the first 10 times. If you’re lucky, it works in the first 100 times. Are you sufficiently convinced, to the point of being obsessive about it? Sometimes that’s what it takes—we’re going to make this thing work or die trying.”

With the announcement of the 2017 class of fellows receiving “the highest professional accolade bestowed to academic inventors who have demonstrated a prolific spirit of innovation in creating or facilitating outstanding inventions that have made a tangible impact on quality of life, economic development, and welfare of society,” the NAI now has 912 fellows. Among them are more than 100 presidents and senior leaders of research universities and nonprofit research institutes, 29 Nobel laureates, and 142 fellows of the American Academy of Arts & Sciences.

“It’s always nice to be acknowledged for the things that you’ve done,” says Bishop, who is one of the most highly cited researchers in micromechanics. He notes that BU’s other NAI fellows include Robert A. Brown, BU president, Theodore Moustakas, ENG Distinguished Professor of Photonics and Optoelectronics Emeritus, and Mark Grinstaff, ENG Distinguished Professor of Translational Research. “Those are amazing and wonderful scientists. So to be told you’re in the same club as folks like that is really quite an honor.”

“Dave’s ingenuity and talent for making things work is phenomenal,” says Thomas Bifano, an ENG professor of mechanical engineering and director of the Photonics Center. “We are fortunate to have him helping prepare the next generation of innovators at BU.”

“Professor Bishop has an impressive record of identifying real-world applications for his scientific and technical research and translating this research into patents and practice,” says Kenneth Lutchen, dean of ENG. Lutchen says that Bishop’s approach is reflected in his success as principal investigator on the BU team that competed successfully for the $20 million, five-year National Science Foundation Engineering Research Center (ERC) grant awarded to BU in fall 2017 to synthesize personalized heart tissue for clinical use. Bishop is director of the new multi-institutional NSF Engineering Research Center in Cellular Metamaterials (CELL-MET).

Also a College of Arts & Sciences professor of physics, Bishop arrived at BU six years ago after a 33-year career at Bell Labs, where most of his inventions were born. “We always referred to it as a problem-rich environment,” he says. Inventions generally begin with a problem that requires solving: “How are you trying to make something smaller, bigger, faster, cheaper, better? What are you trying to accomplish?”

The problem that led to his team’s invention of the Lambda Router? “It was how to route very large amounts of data in optical networks,” says Bishop. “Networks consist of wires and switches. The wires carry the information, the switches decide where the information goes. Think of trains. There are tracks the trains ride on and switches which direct any given train to the right track.”

The “wires” in an optical fiber network are optical fibers made of “strands of glass, roughly the diameter of a human hair,” he says. “Such fibers are capable of carrying vast amounts of data, which far exceeded the ability of electronic switches—basically big computers—to route the information. What we did was build an all-optical switch using micromirrors.”

In 2009, the American Physical Society awarded Bishop the George E. Pake Prize “for his effective leadership of AT&T/Lucent/Bell Labs research during an especially turbulent time in the telecommunications industry, and for his seminal contributions to low-temperature physics research.”

It took Bishop’s unshakable confidence in the technology and in his team to make the Lambda Router work, says White, who will direct nanomechanics under Bishop’s leadership at CELL-MET. “He supported his team in every way, in whatever they needed. I can remember him driving samples around—MEMS chips—from Pennsylvania, where they were sometimes being made, to New Jersey, where they needed to be tested.”

Bishop “has made amazing advances in fundamental science, in solving hard problems,” she says. “The innovation piece means he’s then able to take some of these technologies and put them into real products in the real world. That is a combination you don’t see all that often. He inspires his team, respects every member of the team—including the secretary that’s making his appointments for him, the person in the factory—and the subtleties of what they do. He gets the best out of everyone. He does it by being confident that they can do more than they think they can.”

Bishop is now focused on the CELL-MET team and the task before them. “We’re trying to create cardiac patches,” he says. “Thousands of people around the world die from heart attacks every day. We’re trying to create a solution for that. That’s solving a world-class, big-time problem. When we succeed, that’s going to be an awful lot of people alive for their grandchildren’s weddings.”