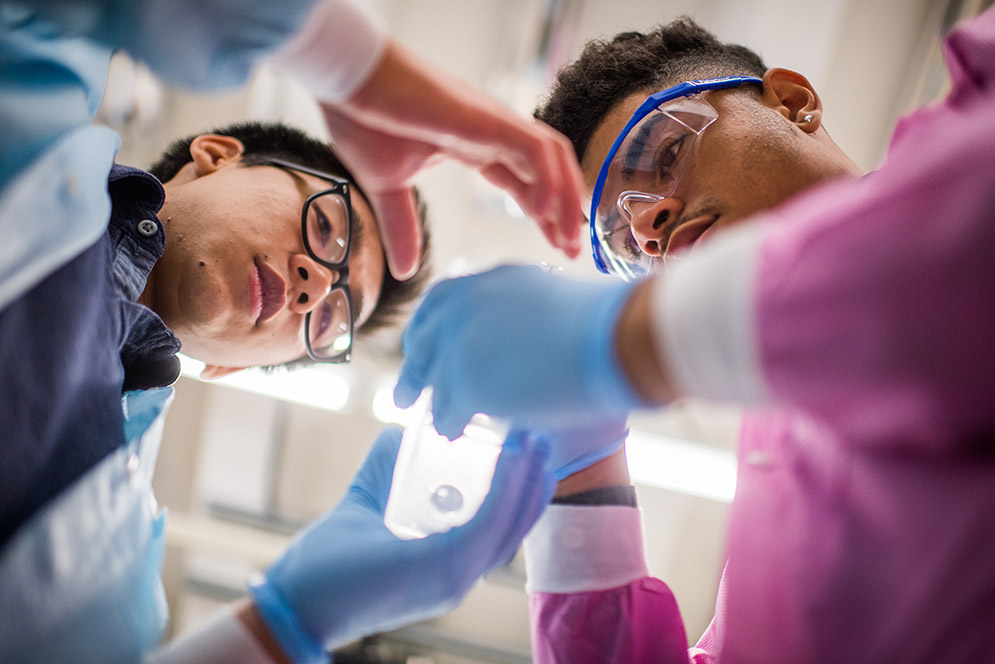 Danny Truong (left), a British International School of Boston senior, and Brandon Hector, a Boston Latin Academy senior, work on a sickle cell experiment as part of the Youth to Health Careers (Y2HC) program at the School of Medicine. Photo by Jackie Ricciardi.

Although he is more cheerful and less intimidating, Donald DeRosa invokes the curmudgeonly TV doctor Gregory House to challenge the high school students facing him in a School of Medicine classroom on a recent afternoon.

Like House, “we’re going to give you a medical mystery and ask you to solve it,” says DeRosa (SED’91,’01), a School of Education clinical associate professor of curriculum and teaching, a MED research assistant professor, and director of CityLab, a biotechnology learning laboratory housed at MED. “What’s the mechanism of the disease—what’s going on inside that person’s body?”

He shows them a video of an actual patient talking about her unpredictable, all-over body pain and how it interferes with her life. The students are quick to suggest diagnoses: “migraines” doesn’t quite work, but DeRosa nods at “a nerve disease” or “a circulatory disease.”

He asks, “Do you have enough information to answer this question?”

The students’ answer: “No.”

The students, all Boston residents, attend schools throughout the area and are enrolled in the Youth to Health Careers (Y2HC) Summer Enrichment Program, administered by the Boston Public Health Commission’s Boston Area Health Education Center (BAHEC). The mission of the Y2HC program is to increase diversity among the city’s health care workforce by helping youth from underserved populations pursue careers in health and public health.

MED has long offered the use of its facilities for the program, so when BAHEC administrators approached Karen Antman, dean of MED and provost of the Medical Campus, earlier this year seeking a closer partnership, the response was overwhelmingly positive. MED provided not only classrooms and labs, faculty, and internships, but also created educational programs.

“It was an incredible collaborative effort across the Charles River and Medical Campuses, including the hospital,” says Hee-Young Park, a MED professor and chair of medical sciences and education and assistant dean of the Division of Graduate Medical Sciences, who chaired a committee to shape the new program. “Faculty, staff, students, and clinicians donated their time to make this happen within the course of a month. Everyone was so committed to providing educational opportunities in health sciences for these students. Not a single person I approached said no.”

Back to the medical mystery

After DeRosa finishes showing the video to his Y2HC students, they set to work in teams. They quickly identify the anomalies in images of the patient’s blood—fewer red blood cells than a normal image, many of them shaped abnormally, like crescent moons. And the patient’s family tree, with those who had the same illness marked, suggests a recessive genetic disorder. One student thinks it’s sickle cell disease, an inherited blood disorder that disproportionately affects African Americans.

“But there is a difference between the facts and an inference,” DeRosa cautions. An experiment is necessary to confirm the diagnosis: two sets of (simulated) hemoglobin samples are subjected to an electrical charge; the one with sickle cell will move more quickly toward the charge. The students have to measure precise amounts of hemoglobin as well as make the gelatin for the “racetrack” the samples will run. As the students don lab coats and safety glasses a lot of selfies are snapped, but they quickly turn serious as they launch the experiment. When it’s over, sickle cell has been confirmed. “We saved him,” one student hoots, and there are high fives all around.

Boston Latin School sophomore Maymuna Rahman (left) and Brookline High School sophomore India Washington are among the 87 students exploring health careers in this year’s Y2HC program, run by the Boston Area Health Education Center. The School of Medicine is a partner in the program. Photo by Jackie Ricciardi.

“Our school is all focused on academics in math and science; it’s all about books, not the experience you’re getting,” says Mahogany Black, a rising senior at Boston Latin School. “They have labs, but definitely not like this.”

The Y2HC students tend to be highly motivated classroom achievers. They spend their mornings delving into math and science and labs in topics like brain anatomy and dissection. Afternoons are for electives, tours, and demonstrations at such places as the College of Engineering’s Engineering Product Innovation Center (EPIC) and the Photonics Center on the Charles River Campus. College prep is also on the syllabus. In addition, the students have internships across the Medical Campus.

“I found that these were students who had a pretty rigorous course load already,” says postdoctoral researcher Matthew Jacobsen (ENG’17), who is teaching a class in anatomy and physiology to a group of Y2HC seniors. “I didn’t feel like I needed to hold back a lot. A lot of the stuff I’ve given them I didn’t see until I was in college.”

Some students enter the program already interested in public health or health-system careers, while others are just learning what’s out there, says Anthony Crosson, BAHEC director. The goal is that by the time they’ve completed the program, students have gained the knowledge and confidence to pursue these careers.

Boston Latin Academy rising senior Brandon Hector knows that he wants to be a surgeon, specializing in neurology. He has a brother who was born with a syndrome that requires a shunt to control the accumulation of cerebrospinal fluid. “I would like to help patients like him when I get older,” Hector says.

“Most of our students are the first generation to go to college and often don’t have the kind of coaching or mentorship that it takes to pursue and succeed in a health career,” says Philomena Asante, director of the Boston Public Health Commission Child and Adolescent Health Division. “What we’re doing is leveling the playing field.”

“Science isn’t getting an answer; it’s seeking explanations, knowing what to do when you don’t have the answer, and that’s what these students have been doing,” says DeRosa. “They’ve made a lot of good connections.”