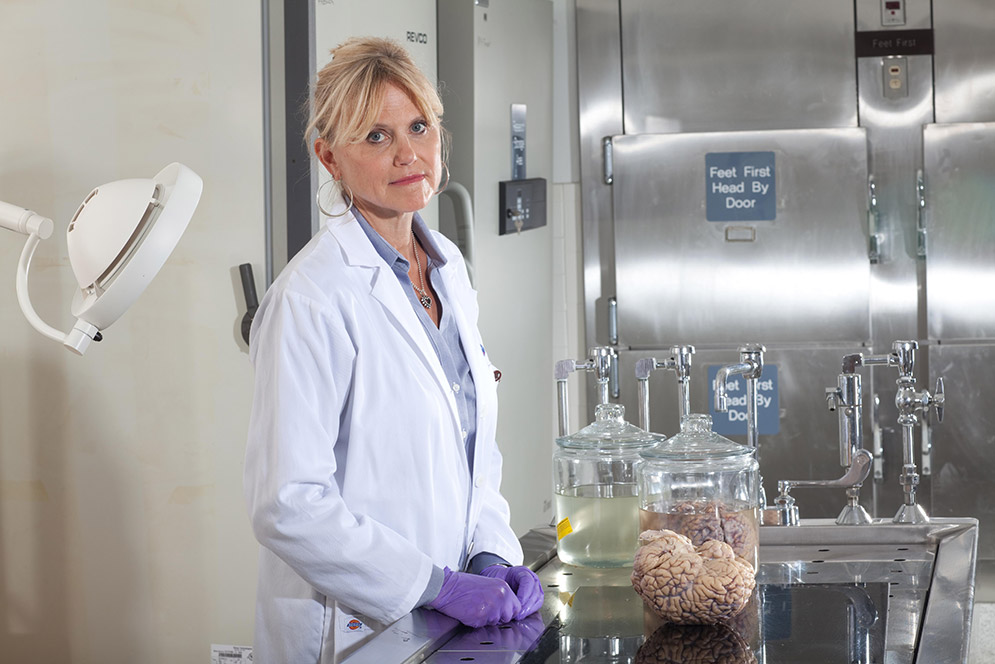 Jesse Mez, MED assistant professor of neurology and lead author on the new study, says: “The data suggest that there is very likely a relationship between exposure to football and risk of developing [CTE].” Photo by Cydney Scott.

Dave Duerson, a former safety for the Chicago Bears, committed suicide in 2011 at age 50. His suicide note read, “Please, see that my brain is given to the NFL’s brain bank.” McKee analyzed his brain and diagnosed moderately severe CTE. Duerson’s brain is among the 202 included in a study published Tuesday in JAMA. Photo by Owen C. Shaw/Getty Images.

Mez notes some puzzling findings from the study. Most notably, the researchers noted clinical symptoms such as depression, anxiety, disinhibition, memory loss, and other mood and behavior impairments even in patients with fairly mild CTE pathology. “Why do you still see symptoms even without that much CTE pathology?” asks Mez. “It suggests that there might be even more going on than just the tau pathology; there might be other things that we need to look at, like inflammation or axonal injury, or there might be regions of the brain that we’re not looking at sufficiently.”

The findings also suggest that there may be other environmental factors at play, like substance abuse, other head traumas, or a genetic component. Mez says that clues may come from outliers in the study, like the one NFL brain that did not show evidence of CTE or the brains from high-school players that did.

Author, Barbara Moran can be reached at bmoran@bu.edu.