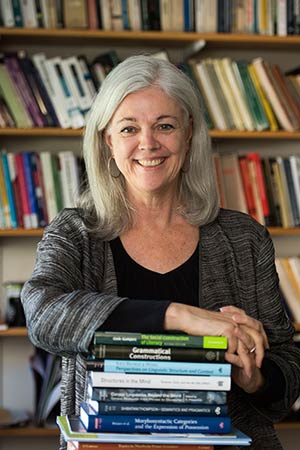 Catherine O’Connor, a School of Education professor of language education, has been appointed SED dean ad interim for one year, starting July 1. Photo by Cydney Scott.

Boston University will relaunch its search for a new dean of the School of Education in the coming academic year, with Catherine O’Connor, a longtime member of the SED faculty and the school’s former associate dean for faculty affairs, agreeing to serve as dean ad interim for the 2017–2018 academic year, beginning July 1.

Jean Morrison, University provost, notified SED faculty and staff of the decision to resume the search by letter on June 15, shortly after the leading candidate for the position unexpectedly withdrew from consideration. In the letter, Morrison also announced O’Connor’s temporary appointment.

The University began the search for the next SED dean when the current dean, Hardin Coleman announced last October that he was leaving the post to return to teaching. Coleman has served as dean since 2008.

“We had a strong pool of candidates who were considered for the deanship, but were unable to come to terms with the top candidate,” says Morrison. “We are grateful to Professor Cathy O’Connor for her outstanding service as chair of the dean search advisory committee and for her willingness to step into the role of dean ad interim of the School of Education as we commence a new search in the coming academic year.”

O’Connor, who joined SED in 1989, is an expert in the fields of linguistics and education. Her research has two distinct foci: documentation and revitalization of endangered languages and the study of classroom discourse in math and science. She teaches in both the literacy and the language cluster in SED as well as in the College of Arts & Sciences Linguistics Program. She is the author of several books and numerous journal articles and book chapters and has received research funding from the National Science Foundation, the Spencer Foundation, and the National Endowment for the Humanities. She earned an undergraduate degree in human language from Stanford University, and a master’s and a PhD in linguistics from the University of California, Berkeley.

“Dean Coleman has been a wonderful leader and we’ve made a great deal of progress as a school in the last nine years, so there are big shoes to fill,” says O’Connor. “I know how wonderful, collaborative, and productive the SED faculty and staff are and I look forward to contributing to our continued progress.”

Coleman is taking a one year sabbatical and plans to return to SED to teach, with a focus on the preparation of school counselors. “SED is extremely fortunate to have a faculty member of Cathy O’Connor’s stature and skill to serve as our dean ad interim in this coming year,” Coleman says, citing O’Connor’s scholarship and work providing professional development for teachers as they integrate an inquiry-based focus to their classroom teaching. “Cathy has been instrumental to SED’s climb into the upper ranks of schools of education…her deep knowledge of the field, SED, and BU will serve her well in her time as dean.”

Author, John O’Rourke can be reached at orourkej@bu.edu.