2017 budget seen as hopeful preview for next round: 2018 funding 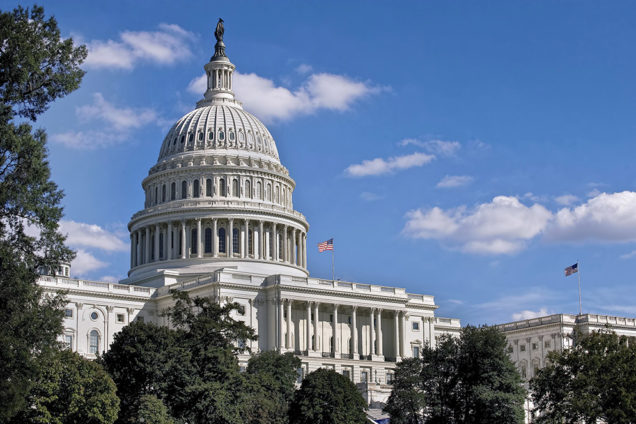 Congress’ budget agreement for the remainder of fiscal year 2017 is good news for researchers and student aid—and a likely preview of how Congress will respond to Trump’s proposed 2018 budget, with its massive cuts to research and higher education. Photo by mj0007/iStock.

Like many scientists across the country, cancer cell researcher Neil Ganem was alarmed by the massive cuts to the National Institutes of Health (NIH) that were proposed by President Trump in March. But Ganem was also confident that Congress, with its history of bipartisan support for medical research, would not approve such reductions.

As it turns out, Ganem, a School of Medicine assistant professor of pharmacology and medicine, was right—at least for now. During the first week of May, Congress agreed on a budget for the remaining months of the 2017 fiscal year—which runs through September 30—that provides an additional $2 billion for the NIH above 2016 funding levels, as well as significant support for other scientific research that Trump has also targeted for cuts. Trump signed the 2017 budget agreement into law, avoiding a shutdown of the government.

“To me, the increase was Congress’ way of sending the message to Trump that his need for more defense—and wall-building—funds will absolutely not come at the expense of science,” Ganem says. “This makes me much more confident about the 2018 NIH budget.”

Researchers and administrators across the University echoed Ganem’s relief over the new Congressional budget agreement—and his confidence in lawmakers’ continuing support for research funding—even as they expressed dismay over Trump’s budget for fiscal year 2018, which was released by the White House on May 23. Expanding on the budget blueprint Trump released in March, the 2018 budget calls for a $7.2 billion cut to NIH spending, as well as an $819 million decrease for the National Science Foundation and a 17 percent, or $919 million, cut to the Department of Energy’s (DOE) basic research wing, the Office of Science.

The 2017 budget agreement “is likely a preview of Congress’ response” to Trump’s proposed 2018 budget, says Jennifer Grodsky, vice president for federal relations, who closely tracks Congressional support for research funding as part of her job advocating for BU faculty in Washington. In its 2017 agreement, Congress also resisted Trump’s proposed sharp cuts to student aid and his call to eliminate the National Endowment for the Humanities and the National Endowment for the Arts. “Congress said, not only are we not eliminating those endowments, but we’re going to increase the budget by $2 million,” Grodsky says.

With the 2017 budget agreement in place, program officers at the NIH and other federal agencies that fund academic research now know how much grant money they have to distribute to researchers for the remaining four months of the fiscal year, she says. BU researchers should have started hearing from their program officers about any outstanding grant money for the period that ends on September 30, she adds.

In addition to massive reductions to the NIH, Trump’s 2018 budget calls for big cuts to a number of other federal agencies: 31.4 percent to the Environmental Protection Agency, 29.1 percent to the State Department, and 20.5 percent to Agriculture. It also targets entitlement programs for low-income people: a 47 percent cut to Medicaid and a cut of roughly 25 percent over 10 years to the Supplemental Nutrition Assistance Program, or food stamps. The budget proposes a $25.4 billion annual increase, or 4.6 percent, in defense spending, and a 6.8 percent increase for the Department of Homeland Security, which includes an additional $2.6 billion to help pay for a US-Mexican border wall.

Grodsky, Gloria Waters, vice president and associate provost for research, and others at BU are already focusing their efforts on sustaining research funding increases for fiscal year 2018. “We’re working with Congress now to make that happen,” says Grodsky. “Members of Congress on both sides of the aisle have already said they will not be adopting Trump’s 2018 budget. Apart from the difficult cuts to popular programs, it’s based on a premise of deep cuts to entitlements such as Medicaid and welfare. Those are really hard for Congress to reach agreement on, and there’s no framework for them to do so now.”

“While we were extremely encouraged not to see funding cuts this year,” says Waters, “we remain very concerned about funding cuts in the future. We need to continue to advocate for research funding and to help the public understand why such cuts would be devastating to the stature and economy of the United States.”

The new 2017 budget agreement brought some encouraging news for socioeconomically disadvantaged students who depend on Pell Grants and other federal programs that help them gain access to, and pay for, higher education. The budget will now allow year-round funding for Pell Grant recipients, although it also rescinds $1.3 billion of the Pell Grant reserve, which could have been used in future years. It increases funding by $50 million, to $950 million, for the Department of Education’s (DOE) TRIO college preparatory programs.

“That’s why TRIO has been around since the 1960s,” says Michael Dennehy (CAS’92, SED’01), director of BU’s College Access and Completion office. “TRIO has champions on both sides of the aisles. It’s a program that works. It helps rural low-income students as well as urban low-income students. For Republicans, it fits with the up-by-the-bootstraps theme. It’s a good story.”

On May 25, Dennehy says, BU was notified by the DOE that it has been awarded a five-year, $1.98 million grant to extend its Upward Bound program through August 2022. He expects to hear about Upward Bound Math-Science funding in August.

Other budgets that saw increases in 2017:

Department of Defense, Science & Technology: Increased by $155.8 million, to $5.9 billion.