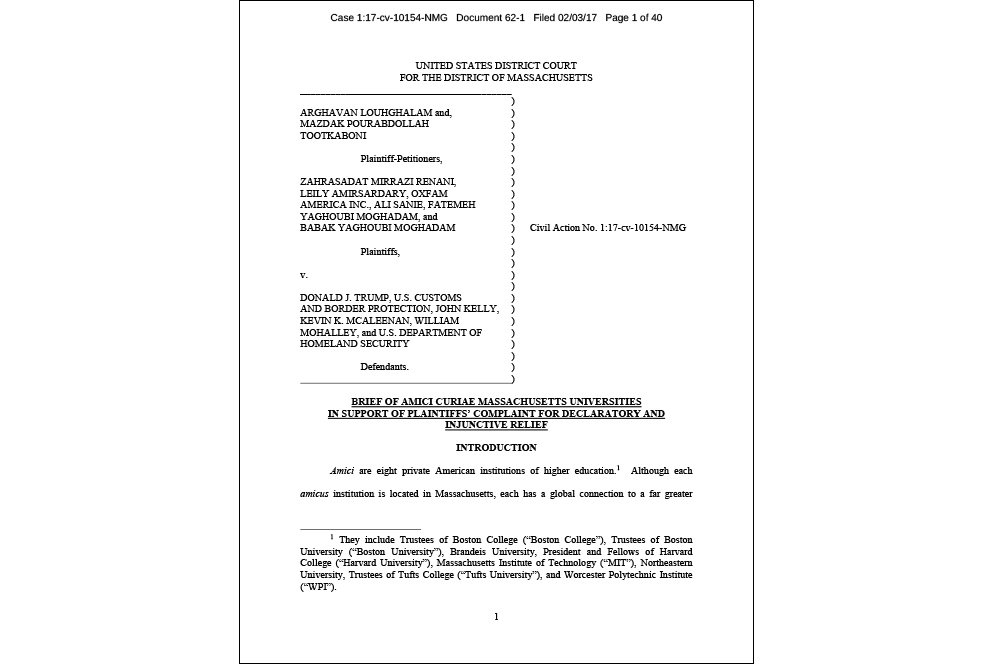 On Friday, the University joined Boston College, Brandeis, Harvard, MIT, Northeastern, Tufts, and Worcester Polytechnic Institute in submitting an amici curiae, or friends of the court, brief in US District Court for the District of Massachusetts asserting that Trump’s January 27 order, Protecting the Nation from Foreign Terrorist Entry into the United States, undermines open academic exchange and collaboration.

The brief, which supports a lawsuit calling for repeal of the executive order, argues that Trump’s order “poses serious risks that amici will not be able to remain the successful institutions of higher learning that they are today.” Access the full text of the brief here.

“Boston University wanted to be sure that the court was aware of how crucial it is to our mission and success to be able to attract and enroll the most talented students and the most innovative teachers and researchers from around the world,” says Erika Geetter, BU vice president and general counsel. Geetter says the schools are not a party to the suit, and are simply providing “important contextual information” for the judge.

On January 27, Trump signed the order blocking entry for all residents of Iraq, Iran, Libya, Syria, Somalia, Sudan, and Yemen for at least 90 days, banning all refugees from entering the United States for 120 days, and banning all refugees from Syria indefinitely. The order precipitated chaos at airports around the globe, as numerous travelers were held up or turned away. There were also widespread protests against Trump’s action, which many see as misguided at best and as anti-Islamic fear-mongering at worst.

Among those affected by Trump’s order were the two UMass professors who filed the original lawsuit, Mazdak Pourabdollah Tootkaboni and Arghavan Louhghalam, a married couple who are permanent US residents and were reportedly on their way back from a sustainable engineering conference in Marseilles, France, when they were detained for four hours at Logan International Airport. They became the first plaintiffs in a suit filed with the help of the American Civil Liberties Union that now includes several other travelers and the international relief group Oxfam America, as well as the commonwealth of Massachusetts and UMass. Their complaint is one of several lawsuits filed in jurisdictions around the country.

Although BU currently has no students or scholars stranded abroad, the executive order poses significant problems going forward, Geetter says. The brief says the schools’ “ability to attract these gifted, accomplished, and motivated students and scholars depends on ensuring their ability to travel freely to and from the countries they once called home—and for that matter, to other nations overseas in support of their scholarship. If amici and their peer institutions cannot assure their students, professors, and researchers that they can freely leave the country to visit their families, attend international symposia or conferences, or engage in overseas field research without encountering impediments to their return, then they will struggle to maintain the level of talent and experience that makes the United States the world leader in higher education and research and development.”

The brief also includes a list of the accomplishments of a sampling of scholars from the seven indefinitely banned nations currently hosted or employed by the schools, but identifies neither the schools nor the individuals involved, to avoid their being singled out.

Late Friday, February 3, Judge Nathaniel Gorton of the Massachusetts US District Court declined the plaintiffs’ request to renew a restraining order against enforcement of the travel ban in the Massachusetts District. But also on Friday, Seattle, Wash., Federal District Judge James Robart issued a temporary restraining order that halts the travel ban nationwide, and early Sunday morning the US Court of Appeals for the Ninth Circuit upheld his order. That court asked challengers of the ban to respond by early Monday, and for the Justice Department to file a counter-response by Monday evening.

The Department of Homeland Security has directed its employees to stop enforcing the ban, and the State Department has reportedly reversed the cancellation of thousands of travel visas.