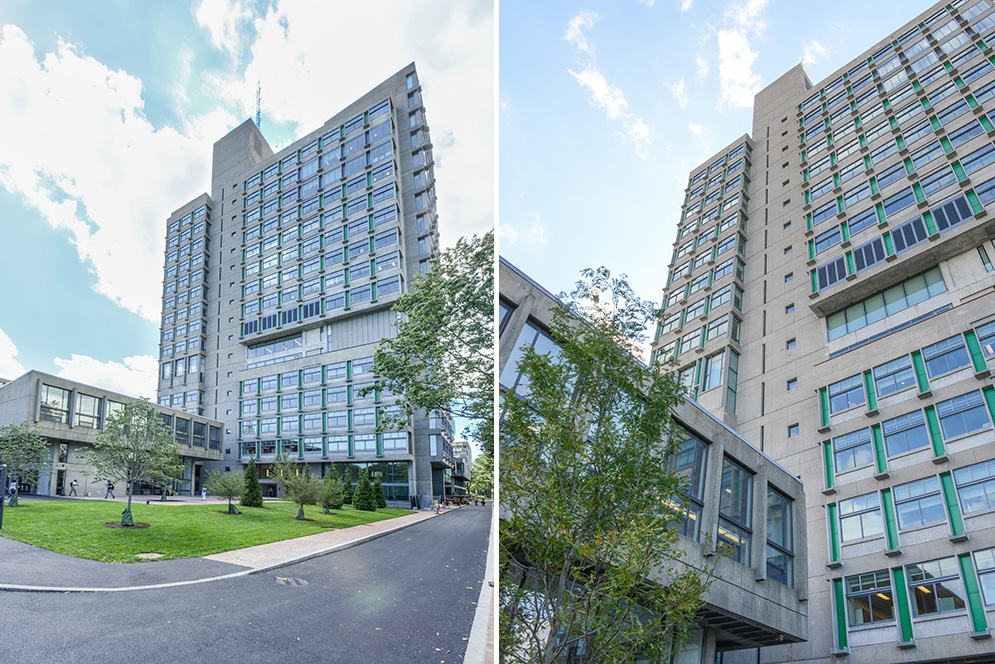 The School of Law construction and renovation project completed in 2015 earned gold status in its LEED Certification Review, a ratings system designed to encourage sustainable design. Photo by Melissa Ostrow.

The BU School of Law makeover won plaudits from students and faculty for its vibrant design and state-of-the art-classrooms and moot courtroom when it was completed in 2015. Now the renovation and construction project has attained an honor for features that aren’t quite as easy to see.

The project earned gold status in its LEED (Leadership in Energy and Environmental Design) Certification Review, a ratings system designed by the US Green Building Council to encourage sustainable design. Many of the features that contributed to the complex’s gold rating are infrastructure hidden away inside the buildings’ walls or items such as windows that may not look unusual, but provide substantial energy savings.

Getting gold certification “is important because it shows BU’s leadership in creating built environments that are more healthy and resource-efficient,” says Dennis Carlberg, the University’s sustainability director. “LEED gets us beyond what is required by code and is concerned about energy efficiency, water efficiency, generally the resources we use in our buildings.”

The construction cost of the 269,000-square-foot project was $133 million, which included both the new five-story Sumner M. Redstone Building, housing classrooms, lounge, café, and libraries, completed in 2014, and the renovation of the Law Tower, completed in 2015. The project was designed by the Cambridge firm Bruner/Cott Architects and Planners.

The 18-story tower was designed in the 1960s by the late Barcelona-born architect Josep Lluís Sert (Hon.’70), a protégé of Le Corbusier and a member of what is known as the brutalist (meaning raw concrete) school of architecture. A former head of the Harvard School of Design, Sert was a mentor to renovation lead architect Leland Cott.

The project earned LEED certification for preserving the tower rather than tearing it down and starting over. But to achieve LEED gold, the renovation required the University “to build a very energy-efficient new building,” Carlberg says, because the basic concrete structure of the tower was not going to change. The architects managed to make the tower significantly more efficient, replacing windows with new, thermally insulated units and adding insulating panels to floors, ceilings, and perimeter walls. They also replaced the building’s heating and cooling systems with energy-efficient “chilled beams” that contain circulating water.

“This is taking an existing building and bringing it into the 21st century in a really robust way,” Carlberg says.

The renovation and construction project has also led to less frequent use of elevators, and thus less expenditure of energy. “One interesting feature of the Redstone building,” Carlberg says, “is interior stairways that are not just exit stairs but actually pleasant stairs to lead you from one floor to another, so you’re less likely to use an elevator.”

Prior to its renovation, the tower’s elevators saw heavy use, because classrooms were high in the tower (students reported sometimes having to wait 20 minutes for an elevator). With more offices in the tower and larger gathering spaces and classrooms now clustered on the addition’s lower floors, elevator use has been reduced dramatically, Carlberg says.

“New construction turned out to be the best strategy for the type of teaching and academic support space the school needed,” says Gary Nicksa, BU senior vice president for operations. “The complete renovation of the tower was a great solution, in terms of being both cost-effective and environmentally sustainable, for faculty and administrative offices.”

“LEED certification is a very involved process that begins at the beginning of the project,” says Carlberg, In this case, that dates back to 2011, when all of the stakeholders came together to discuss sustainability issues, opportunities for green improvements, and cost-benefit analysis.

Two submissions are required from those applying for LEED certification: a design submission at the beginning of the project and a construction submission at its completion. A LEED-accredited consultant from Bruner/Cott oversaw the process throughout.

“Along the way, the contractor and design team are tracking your materials,” Carlberg says. “What’s the recycled content? Were the materials sourced regionally, within 500 miles? We want to cut down on the carbon footprint of transportation of those things to the site.”

The LAW project also earned points for its location in a densely developed area with access to public and alternative transportation.

BU scored 68 points out of 68 attempted. Gold is the second-highest rating a project can earn, ranging from 60 to 79 out of a possible 109 points. Platinum—the highest rating—is awarded to projects earning 80 points or more. But the real goal in designing the complex, says Carlberg, isn’t about earning a specific score, but about creating a better environment.

“The whole point is to transform the marketplace so the construction industry is building better buildings,” he says.