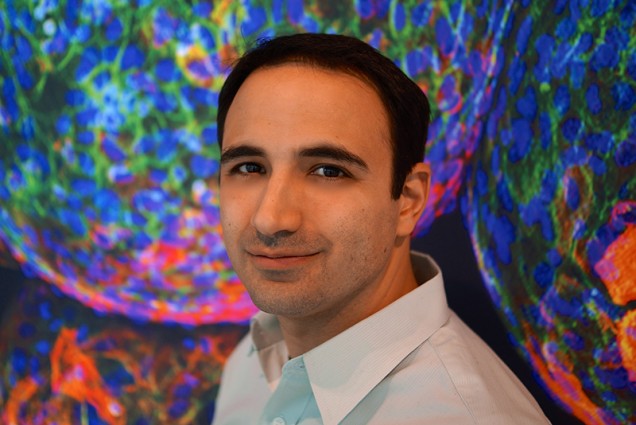 Arturo Vegas wants to create novel therapies that will either suppress rogue immune cells attacking the pancreas of people with type 1 diabetes or strengthen the pancreas’ defenses against the rogue cells. Photo courtesy of Arturo Vegas.

Type 1 diabetes is rare but devastating. A person’s own immune system attacks the pancreas, destroying insulin-producing tissue and the body’s ability to regulate blood sugar. About five percent of people with diabetes—approximately 1.25 million Americans—have this form of the disease, according to the American Diabetes Association. Unregulated blood sugar can lead to blindness, kidney failure, and death.

Scientists aren’t sure what causes type 1 diabetes, though they suspect that a genetic predisposition, combined with an environmental trigger, causes a sudden disruption in the immune system that causes it to attack the body’s own tissue. The only treatment is a lifetime of careful blood sugar monitoring, with insulin injections as needed.

But what if there were a way to block the immune system before the damage was done, preserving at least some of the pancreas’ ability to produce insulin? That’s the goal of Arturo Vegas, a Boston University College of Arts & Sciences assistant professor of chemistry, whose lab combines biology, chemistry, materials science, and engineering to develop targeted therapies for complex diseases like diabetes. He recently was awarded a prestigious $1.4 million Type 1 Diabetes Pathfinder Award from the National Institutes of Health (NIH) to pursue the work.

“Most of the therapies today deal with the disease after it’s already there,” says Vegas, a Peter Paul Career Development Professor. “We want to preserve the patient’s own tissue as much as we can. How do we develop technologies that intervene before they’ve lost all of their insulin-producing tissue? 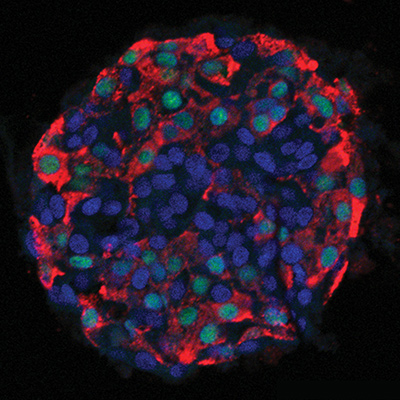 “There’s this very broad range of time when the disease manifests itself,” adds Vegas. “It actually takes time, and it varies from patient to patient.”

Vegas is going to take advantage of this window and create novel therapies that will either suppress rogue immune cells or strengthen the pancreas’ defenses against them.

“Type 1 diabetes is a huge clinical problem, and this is a smart and clever way to approach it,” says Mark Grinstaff, a BU professor of chemistry and biomedical engineering.

The defensive position, which Vegas calls “targeted immunosuppression,” would take existing drugs used to prevent the body’s rejection of organ transplants and tweak them to target specific immune cells.

“We know the immunosuppressants work. They’re just applied in a way that kind of carpet bombs the body,” says Vegas. “What if we can make those drugs a little smarter, and give them a guidance system, so that they’re only going to affect the immune cells that are performing that horrible autoimmune function at the site of the insulin-producing tissue?”

Vegas’ other idea is to go on the offense, designing a molecule that seeks out and destroys rogue immune cells before they get anywhere near the pancreas.

“Normally when our immune system gets matured and educated, the bad-actor cells that might target our own tissue are filtered out,” says Vegas. But in type 1 diabetes, the filtering mechanism is broken and leaks out immune cells specifically designed to attack the insulin-producing tissue. Fortunately, these bad cells have a bulls-eye: a protein marking them as pancreas-attackers. Vegas wants to build a molecule that can bind to this protein and either destroy the immune cell or block its action. “If you take out these cells, it’s likely that you won’t harm the rest of the immune system,” says Vegas. “You’re just removing the bad actors.”

Vegas says that his background in biology and chemistry, combined with advanced training in chemical and biomedical engineering in the labs of Robert Langer and Daniel Anderson at the Massachusetts Institute of Technology, allows him to study problems from several different angles and see patterns and solutions that may have been overlooked.

“Arturo’s training positions him to ask really difficult questions that can only be addressed by bringing together several fields, and this NIH funding will enable him to perform the critical experiments to test his hypotheses,” says Grinstaff.

Though Vegas is doing basic research, his ultimate goal is to see his work delivered to patients.

“If, at the end of my career, I can say, ‘I developed a technology that was behind that drug,’” he says, “then I will say I’ve had a very fruitful, accomplished career.”

Author, Barbara Moran can be reached at bmoran@bu.edu.

A version of this article originally appeared on  BU Research.