One Class, One Day: On the Trail of Boston’s Missing Rs 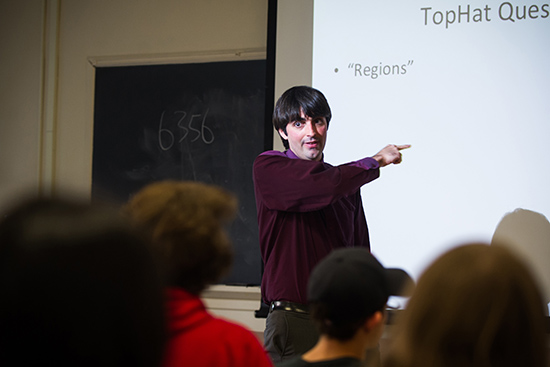 Neil Myler, a CAS assistant professor of linguistics, says that Bostonians’ missing r disappeared long ago and across the Atlantic. Photo by Jackie Ricciardi.

Neil Myler teaches linguistics, and in today’s class he’s focusing on a topic that’s not quite a word: r-less-ness. It’s the standard sociolinguistic term for the classic Boston accent, as in pahk your cah in…well, you know.

The College of Arts & Sciences assistant professor of linguistics tells the 56 students in Say What? Accents, Dialects, and Society that the missing consonant disappeared long ago and across the Atlantic. “One of the main reasons why Boston and its hinterland are r-less is that a lot of the original settlers of the region were from East Anglia, in the southeast of England, which is where not pronouncing the r started off,” he says. “A lot of the original colonists were already r-less, even if most of Britain wasn’t.”

Myler’s accent clearly marks him as a Brit. And while he may sound posh to us, he tells the class that he grew up in Ormskirk, a market town in Lancashire, and a fellow Englishman would immediately peg him as a working-class northerner. So he has a healthy skepticism about word snobbery.

“Never let a Brit sneer at you for saying ‘soccer,’” he advises the students, getting a laugh. It’s only in the last half-century that the Brits have insisted on saying football. I know we’re really annoying about that, but don’t let us be.”

His fascination with language began with French and Spanish classes in school, where he enjoyed an adolescent’s annoyance at the difficulties imposed by their differences.

“I didn’t know it, but I was doing a very basic comparative linguistics in my head,” Myler says. “Then I came across the fact that linguistics is a thing, I think by messing around on Wikipedia.”

He studied languages and linguistics at the University of Cambridge, earning bachelor’s and master’s degrees. Eventually, at an American mentor’s suggestion, he ended up at New York University, where he completed a PhD.

“It was only when I arrived at NYU that I started working on English dialects, because all of a sudden I was in a place where I was exotic,” he says. “A lot of my early research topics just came from Americans stopping me in the middle of a conversation and asking, ‘What the hell did you just say?’”

Dialect is any way of speaking associated with a particular group of people, and it can encompass all aspects of language use, including sounds, grammar, and vocabulary. Accent is a subset of dialect, the bit having to do with sound—vowels, consonants, intonation. Dialects are shaped by place, class, education, and race, among other factors, Myler says, which are tightly interconnected in language in ways that make it difficult to tease them apart. So dialect can often act as a powerful social marker, for better, or often, worse.

He notes that experiments have proved that people can often guess someone’s ethnicity from hearing them say “Hello” over the phone. That can lead to subtle forms of bias, such as racial bias in housing. Even with diversity a hot topic on campuses recently, language is frequently off the radar, despite its potency as an identifier. Even people who think of themselves as progressive may feel it’s fine to make fun of the way people speak, he says.

“I was amazed when I got to this country by the extent to which American college students feel the need to completely alter their accents to fit in,” Myler says. “There’s still a very pervasive sort of linguistic insecurity on the part of people that sound like they’re from the South, for example, or sound like they’re from inner city Detroit. They come to a place like this, and they try to iron out aspects of their speech that can get them picked on.”

On this day in class, no one is getting picked on, even as Myler reviews last week’s homework, which had students phonetically transcribing speech samples. The problems that cropped up seem to focus on aspirated stops, consonants followed by a puff of air from the speaker. He gives the students a trick to recognize the stops: “Put your hand in front of your face and say it. ‘Pan!’ ‘Span!’ Does it feel different? Kin versus skin—it’s the same effect.”

The main topic of the class, though, is English dialects and how they spread across the New World. In addition to eastern Massachusetts, the other r-less zones tend to be the hinterlands of Jamestown, Va., and Charleston, N.C., places that were also settled by people from the southeast of England.

“There were also people who moved from the southwest of England,” Myler says, and they “tended to settle in more or less the same areas but mainly on harbor islands, where they could continue fishing and crabbing and so on, because those were the trades that they knew from the southwest of England. What that meant was that you got pockets of r-ful speakers on islands off the coast, places like the Outer Banks of North Carolina.”

Myler projects a map of the United States with the dialect regions outlined in different colors. “What do you notice about this map, the general shape of the regions?” he asks.

“And why do you think that is?”

“Because people moved out west.”

“Yes, it’s bands of people moving west and smearing the dialects all the way across,” Myler says.

Some dialects are clustered more tightly, though, in places like New York and New England. “Why is that?” he asks.

“Could it be a time axis?” Christopher Bunting (CAS’20) answers.

“Exactly. Dialect differences take time to evolve,” Myler says. “You’ve got more chance of things becoming distinctive if they’ve been in place for a long time. This is why Britain is a much more dialectally heterogeneous than the United States, because English speakers have been there for longer, changing for longer.”

And why, exactly, did people in the southeast of England start dropping their rs in the first place?

“There’s no real way of answering that kind of question,” he says.

“In general, linguists have a good idea of why certain types of sound changes happen a lot across languages, but it’s often impossible to figure out why a certain change happened in a particular community at a particular time,” he says. “Clusters of consonants frequently get simplified over time by deleting one of them, because consonant clusters are more difficult to perceive and articulate than single consonants. Consonants at the ends of words can get eliminated over time for the same reason. The dropping of the rs often has the effect of eliminating what would otherwise have been a consonant cluster.”

But why such a change took off in the southeast of England, but not in, say, Scotland, Myler says, “we’ll probably never know.”