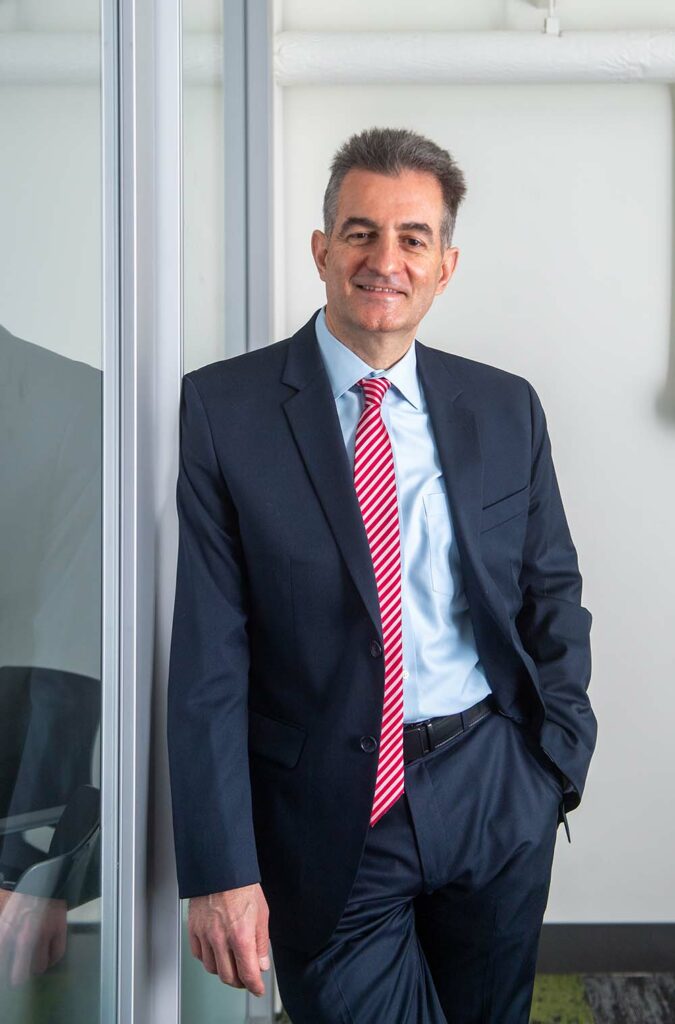 By Rich Barlow for BU Today

The Rafik B. Hariri Institute for Computing and Computational Science & Engineering will have a new director as of July 1. Ioannis Paschalidis (ECE, BME, SE), a College of Engineering Distinguished Professor of Engineering and of computing and data sciences, will oversee the institute’s move into a new, eye-arresting building (the largest on the Charles River Campus), the Center for Computing & Data Sciences.

Paschalidis replaces Eric Kolaczyk, who is leaving BU after almost a quarter of a century to move with his family to Canada.

The appointment adds to Paschalidis’ already impressive portfolio. He directs BU’s Center for Information and Systems Engineering (CISE), which researches and designs intelligent data systems. He cowrote the proposal that won BU a matching state grant for the University’s new RASTIC robotics lab, which will enable more undergraduate and master’s students to research and test next-gen robots and artificial intelligence.

The Center for Computing & Data Sciences, whose construction is on track to finish later this year, represents BU’s planting the flag in a field that is remaking academic disciplines, and society. Among Hariri’s neighbors in the building will be the new Faculty of Computing & Data Sciences and the College of Arts & Sciences departments of computer science and of mathematics and statistics.

“Putting all of these groups under the same roof, I think, will further facilitate interactions,” Paschalidis says.

Beyond the move, he says he has three priorities as the institute’s new leader, the first involving forging closer ties to the School of Medicine. “I feel—and I think the University agrees—that we have not leveraged as much as possible the fact that we have a medical school,” he says. “And I think there’s much more that can be done” to arrange collaborations between engineers and computer scientists and doctors—those who do research as well as healers on the hospital ward. “There is a lot of activity these days around AI and health, AI and medicine, automation, new sensing technologies that would improve the way we can sense on a daily basis what happens, identify diseases, find new biomarkers.

A second initiative will be to maintain “the service aspect of Hariri” to BU professors, including the institute’s fellows program, which provides research support to junior faculty and to students. That support also brings different disciplines together in “community-building activity,” he says.

The third will be to continue “focused research,” that is, “internal funding mechanisms for encouraging groups at the University to coalesce around a specific field” in yearlong research teams. “The main objective is to form teams that will then have enough cohesion and enough preliminary work so that they can go out, they can write a proposal [for competitive grant funding], and be successful.”

Paschalidis takes the helm at a critical point, says Gloria Waters, vice president and associate provost for research, “as we launch new efforts in the fields of computing and data sciences.

“His deep roots in engineering, his role as a founding member of the Faculty of Computing & Data Sciences, as well as his extensive collaborations across the Charles River and Medical campuses position him well to build on the tremendous success the Institute has had in fostering collaborative research that connects the faculty across the University.

“I am certain that his focus on research excellence and his highly collaborative style will further lead to establishing the Hariri Institute as an internationally recognized center of excellence,” Waters adds.