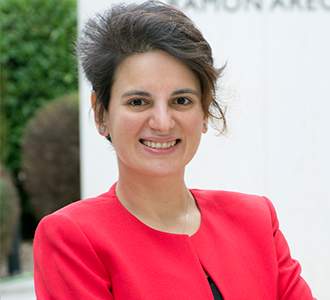 Assistant Professor Rabia Yazicigil was a keynote speaker at the Nature Symposium in Spain, which was covered in the Spanish media through a press conference and national television. Yazicigil discussed her research in collaboration with MIT on biomimetic sensors, and focused on their biomedical applications. These biomimetic sensors are “ingestible electronic devices” useful for disease diagnosis and monitoring of the GI tract. Yazicigil and her team plan to use their research to help with Crohn’s disease diagnosis, but it could be applied to other inflammatory GI tract problems as well.

“This is an ingestible sensor that will track and record the inflammation of the GI tract in a continuous and minimally-invasive manner, and especially tailored toward an individualized response for each patient’s disease,” said Yazicigil.

Yazicigil’s team in collaboration with MIT is currently developing a mm-scale ingestible micro-bio-electronic device by leveraging the natural advantages of biological systems in sensing and electrical devices in computation and wireless communication.

“The difference between this method and some of the existing methods is that we are obtaining high-resolution data which means it could tell you the onset of acute disease episodes (flares) and allow for better disease management and early intervention,” said Yazicigil.

Yazicigil also worked with MIT researchers on the cryptographic “tag of everything,” which showcases the team’s work on the authentication of ID tags operating at terahertz (THz) frequencies to mitigate counterfeiting. Their work was published at the 2020 IEEE International Solid-State Circuits Conference (ISSCC), a leading meeting in the field of integrated circuits, and also reported in the MIT News. “This small tag (roughly 1.6 square millimeters) is packageless so it doesn’t require any additional packaging costs and contains a low-power cryptographic processor.” explains Yazicigil.

Yazicigil has been an active member of the IEEE SSCS Women in Circuits Initiative (WiC) Committee since she was a PhD student. The goal of the committee is to increase advancement and retention of women in the field of solid-state circuits. Yazicigil recently served as the Vice Chair of the 2020 Rising Stars Workshop organized by SSCS WiC committee at IEEE ISSCC. The workshop included an academia panel focused on the tenure process, balancing life and work, and the overall navigation in academia. Another panel focused on careers — trends in the industry and how to rise to the top. Yazicigil explains: “You can think of this as an education and mentoring workshop for graduate and undergraduate students as well as young professionals who are in the industry and recently graduated.” She also co-organized a panel entitled “Is Open-Source Hardware Revolution on the Horizon?” with the participation by ARM, NVIDIA, Intel, Google, and researchers from academia. The discussion focused on open-source hardware revolution and associated challenges.

Professor Yazicigil received her PhD degree from Columbia University in 2016 and joined Boston University in 2018. She is the principal investigator at the Wireless Integrated Systems and Extreme Circuits (WISE-Circuits) Laboratory.