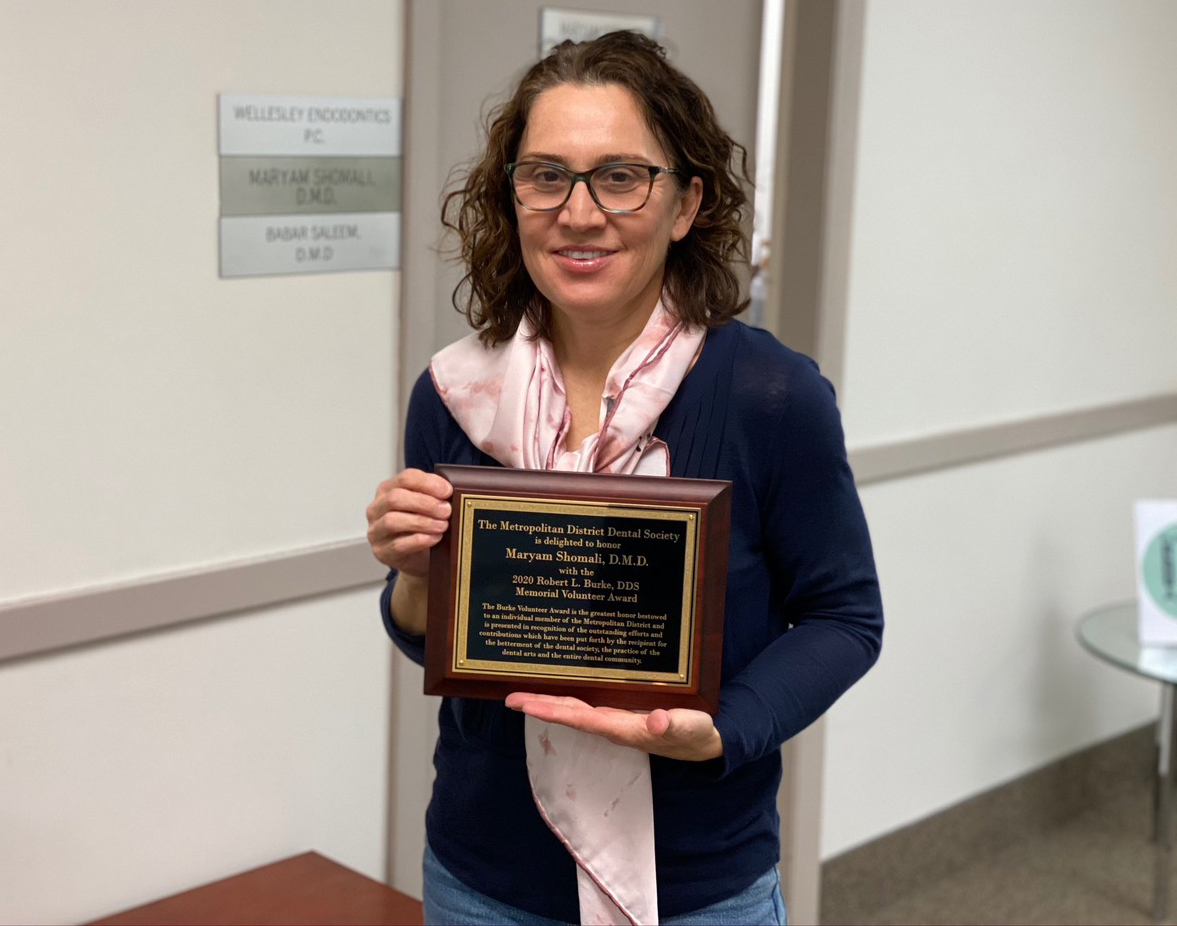 Maryam Shomali CAS 87 ENDO 93 joined organized dentistry after graduating from dental school in 1990—but it wasn’t until 10 years ago that she became actively involved with her Massachusetts Dental Society (MDS) district, the Metropolitan District Dental Society (MDDS).

“I was a quiet member—I would attend a meeting on and off— but it wasn’t until the last 10 years that I got more involved,” Shomali said. “For me, it brings a camaraderie between you and your colleagues. Organized dentistry can be an isolating field. You’re in your room with your patients all the time. It wasn’t until I became involved with all of these volunteer positions that I realized … it’s nice to hang out with your friends, your colleagues, tap into their knowledge, get guidance from them, give back to the community.”

Shomali has come a long way since her days as a “quieter” member: She was recently named the winner of the MDDS’ 2020 Burke Volunteer award, which is presented each year to an MDDS member “in recognition of the outstanding efforts and contributions which have been put forth by the recipient for the betterment of the dental society, the practice of the dental arts, and the entire dental community,” according to the MDDS.

“I was actually very surprised,” said Shomali, “and I felt honored and humbled because I know that [it’s] a very prestigious award.”

Shomali has held a variety of leadership positions in the Metropolitan District Dental Society, which consists of several towns in the greater Boston area; she currently serves as MDDS treasurer and previously served as the organization’s chair. She has also served as president of the Charles River Study club, chair of the Continuing Education Committee, and as a member of the Social Event Planning Committee. Shomali is also the president-elect for the GSDM Alumni Association.

Shomali also has volunteered for several years at the Metropolitan District’s “Give Kids a Smile” event, where children in need have the opportunity to partake in dental exams, x-rays and cleanings.

“It’s seeing those kids’ faces, their smiles—they’re so excited to learn how to brush their teeth, and the parents are so grateful about having this program that’s free to them,” Shomali said. “They feel like the dental community is taking care of them.”

Shomali said that her time at GSDM—in particular, the opportunity to study under the late Herbert Schilder, who chaired the GSDM endodontics department from 1963 to 2003—inspired her to get involved in organized dentistry.

“He [was] adamant that his residents become a member of the American Association of Endodontists (AAE),” she said.

Shomali graduated from Tufts University School of Dental Medicine, where she received her Doctor of Dental Medicine degree. After practicing general dentistry for a year, she entered GSDM, where she was awarded a Certificate of Advanced Graduate Studies  in Endodontics in 1993. Shomali has worked in private practice for the last 27 years, and holds the rank of clinical assistant professor at GSDM.