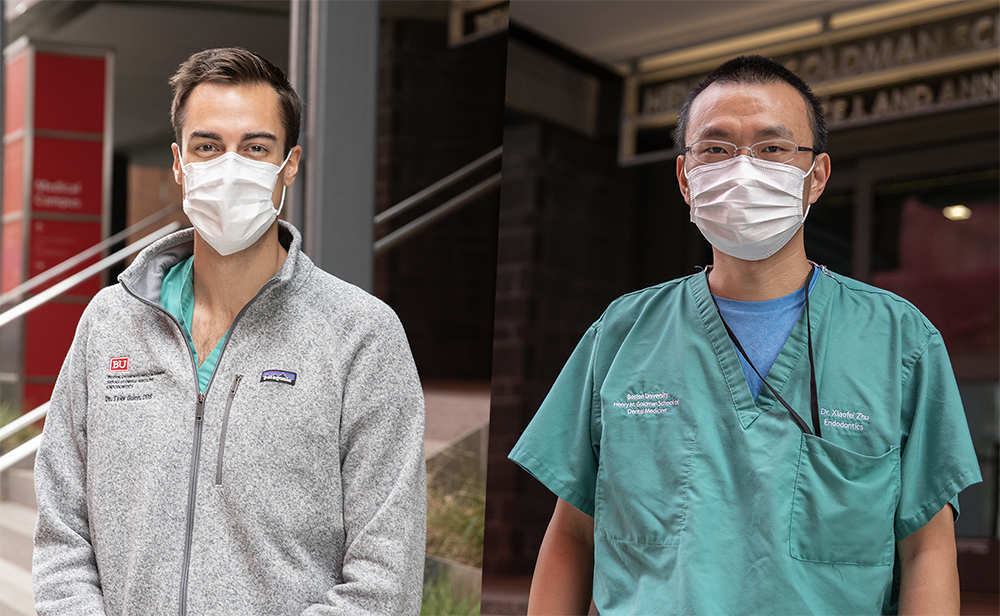 Randy Birsch ENDO 21, Tyler Guinn ENDO 21, Louis Deluke ENDO 21, Luke Harden ENDO 21 and Xiaofei Zhu ENDO 21 are serving on committees with a range of purposes, from examining the AAE’s role in regenerative endodontics to increasing awareness of the specialty among the public.

“It is truly remarkable for so many of our residents to be serving on national-level committees,” Dean Jeffrey W. Hutter said. “This wonderful achievement will be excellent experience for our residents and will also continue to raise the national profile of our endodontics program.”

Endodontics residents have served on AAE committees in the past – but never have this many residents been selected to participate in one year, said Dr. Sami Chogle, department chair and director, advanced education program in endodontics.

“It’s a dream come true,” said Chogle, who sits on the AAE’s Research and Scientific Affairs committee. “We’ve been trying to be more active … it’s definitely something we’ve been celebrating.”

The AAE has 18 standing committees and four special committees, which develop programs and resources for the AAE Board of Directors’ consideration and implement projects at the board’s direction. Individuals apply to be a part of a committee; the AAE President-Elect then reviews these applications and recommends a slate of committee appointments to the AAE Board for approval. Committees are, largely, made up of practicing endodontists, but many have one resident who sits on the committee and serves a one-year term.

Guinn, who is serving on the Public and Professional Relations committee, said that residents bring a different perspective to the table.

“It’s a way for [committee members] to see what residents are facing, or the differences that we have in current residencies than what they had,” Guinn said. “I think that also helps them remember what it’s like to be a resident.”

Deluke, who is a member of two committees—REACH and the Resident and New Practitioner—that focus on the resident experience, said he values the opportunity to network with other residents.

“We get caught up in our own bubble—especially here in New England, where we have Tufts, Harvard and BU,” Deluke said. “I think it’s important to be able to meet people who are going through the same thing as us—who have the same career as us—in other parts of the country … see how others are doing things, and to share ideas.”

Zhu applied to be on the Regenerative Endodontics committee because of his background: He has researched the subject for the last 10 years.

“It’s really good training for us, to have some experience … to collaborate with different researchers, different committees, and different universities,” he said.

COVID-19 has affected the many of the AAE committees. For example, the Resident and New Practitioner committee puts together an annual conference in Chicago, but this year, the event was canceled.

“The next one is in August [2021]; hopefully in person, but we don’t know yet,” said Deluke. “But we’re starting to plan the lectures, and even if it is virtual, it’ll happen.”

Guinn’s committee — Public and Professional Relations — focuses on connecting with patients and the public. So when COVID-19 hit, he spoke to practitioners to learn more about the problems they were facing, and then shared that feedback with other committee that could tackle directly some of the issues raised, like acquiring an adequate supply of PPE.

According to Chogle, seeing how organized dentistry handles large, important issues is one of the most useful parts of being part of a committee as a resident.

“This really gives [residents] a backstage pass to see how these things are run and how decisions are made and what are the important issues are that perhaps the average endodontist does not hear about, but we deal with on a committee and organized dentistry level,” Chogle said.