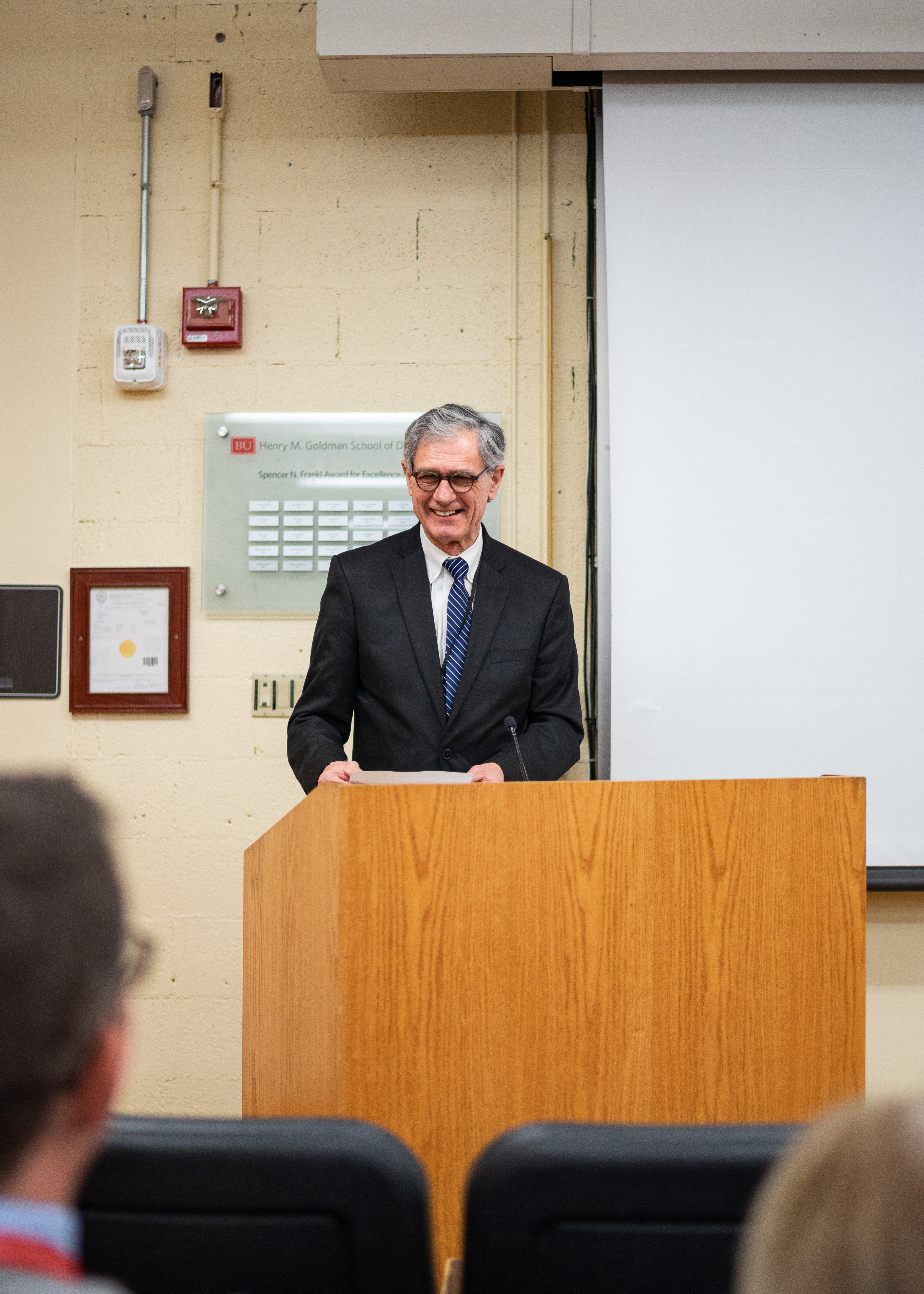 After a long and illustrious career as professor and chair of the Department of Restorative Sciences & Biomaterials at the Henry M. Goldman School of Dental Medicine (GSDM), Dan Nathanson DPH 85 PROS 90 retired from the school’s faculty in December 2019.

In recognition of his many years of service and his contributions to the School, Nathanson was awarded the honorary title of GSDM Distinguished Scientist, a title and set of responsibilities conferred to individuals at the highest level of academic and research achievement. Nathanson is only the second individual to be so recognized in the school’s history. Nathanson also was appointed to the academic rank of emeritus professor of Restorative Sciences & Biomaterials, an appointment that honors his extraordinary level of commitment to academia and the dental profession during a career that spans nearly four decades at Boston University.

“Dr. Nathanson established himself as a renowned teacher, educator, clinician, and researcher,” said Dean Jeffrey W. Hutter. “It is a pleasure for me to honor these accomplishments as we celebrate Dr. Nathanson’s many contributions to our School and our profession.”

Nathanson graduated from Hebrew University School of Dental Medicine (Jerusalem, Israel) with a Doctor of Dental Medicine in 1972. He subsequently was awarded in 1975 a Certificate of Advanced Graduate Study in Advanced Restorative Dentistry from Harvard School of Dental Medicine, and then completed a Research Fellowship in Dental Materials at the Forsyth Dental Center in 1976. Dr. Nathanson went on to earn a Master of Science in Dental Public Health at GSDM in 1985, and then in 1990, completed a Certificate of Advanced Graduate Study in Prosthodontics, also at GSDM.

During his time at GSDM, Nathanson’s work significantly advanced the field of esthetic and restorative dentistry through clinical application and research. His list of publications includes nearly 300 scientific abstracts and nearly 100 published articles, textbooks and textbook chapters; Nathanson presented his work in 40 U.S. states and 42 countries.

“Over the last few decades, Dr. Nathanson has been both a transformative figure both at our school and across his field,” Dean Hutter said.

Even in retirement, Nathanson will continue to influence his field through the careers and work of the countless residents he has mentored and advised in his research laboratory throughout the years. Graduates of the clinical and research programs headed by Nathanson serve in academic, industry, and other positions of distinction around the globe, a tribute to his contributions to the profession and industry.

Effective 3/24/20-4/7/20, all in-person patient care will be discontinued. Any appointments between now and April 7 have been cancelled, and we will be reaching out to affected patients to reschedule.

We will continue to provide emergency oral healthcare via telemedicine. If you need emergency care, please call 617-358-0190, and leave a voicemail for a patient coordinator. Unfortunately, we cannot accept walk-in patients at this time.