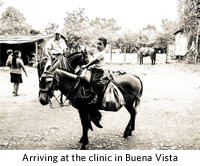 Imagine: the dentist wants to do a filling on a minor cavity and the patient says, “No. Extract the tooth.” That’s what Kathy Ko, Christian Peralta, and Justin van Dusen (all DMD 13) encountered on an elective externship to Buena Vista, Nicaragua, with San Juan Rio Relief, March 2–March 10, 2013.

“I think [patients] were worried that it might be the last time they see the relief group so if they don’t get the tooth out now, they’re not going to get it out later,” Peralta says. “I tried to explain to them that this group comes back every year and if the tooth becomes problematic, the next group can extract it.”

The group does return to the same location annually, but with rough terrain, rickety bridges, and horses as the main mode of travel, getting there is a feat for locals. A severe lack of oral health education has led to extensive caries, even for those who make the trip each year.

Both Ko and van Dusen routinely extracted up to seven teeth from the infants and children they saw during the trip. They estimate that out of the 50 patients each saw, 2 might not have caries.

“We saw them take a bottle of a Coke, dump it into a plastic bag, and give it to someone to drink,” Ko says. Soda companies send massive trucks that can handle the terrain to deliver Coke and Fanta, but they don’t send bottled water. The local water is not safe for drinking, and residents have no access to fluoride, which Assistant Professor Kathy Held says might help fix the problem.

“Studies of supervised brushing programs with fluoride toothpaste in schools have shown up to a 43 percent reduction in caries,” she says. “But fluoride is thought of as a cosmetic there. “

Students say that it is frustrating to know that they are leaving some oral health problems, but they are pleased with the work they did.

Van Dusen says, “When you see a child with a giant infection and the next day they’re feeling better, you know you did something good.”

Across the board, students say they gained behavior management skills for treating children. Ko, especially, appreciated this aspect of the trip; she will enter the advanced specialty education program in pediatric dentistry at the University of Texas, Houston, next year.