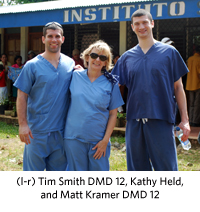 Smith and Kramer were each paired with one of the Cannon brothers as the group, 19 volunteers in total, treated 519 dental patients. The students saw only children, but adults were seen by some of the Nicaraguan dentists who were part of the volunteer group. The students performed mainly extractions and employed the adequate restorative technique (also known as ART or “fujis”). The group tallied 511 extractions and 351 “fujis” successfully completed during the week-long trip.

Held, who traveled with Dr. Chris Cannon to Nicaragua years ago to scout the area before this trip was created, was excited to return and act as an assistant for the now established volunteer effort. She added, “This was a great group. Everyone who signed up for this trip was on a mission to help people.” She continued, “The students also received excellent mentoring on this trip. It was really fantastic for them to receive one-on-one guidance from such established pediatric dentists.”

Smith, who has already been accepted to a postdoctoral pediatric dentistry program, really identified with mentor Dr. Chris Cannon. Both are from a large family, with numerous brothers and only one sister. Smith’s older brother is also a practicing pediatric dentist. He hopes that he will be able to return to Rio San Juan on future mission trips and next time get his brother involved too.

Smith added, “This trip was so much more than I expected. After treating so many children I feel more confident entering my post-doctoral program. Working with the Dr. Cannons I learned coping mechanisms for treating children who are crying or upset. I learned when to soothe a child patient, when to be stern, and when to have fun with the patient.”

Kramer, who is not planning to pursue pediatric dentistry as a specialty, still said that he had an amazing experience. He added, “This trip really allowed me to see how important dentistry is. In Rio San Juan we saw a need for oral health care that is not being met; these children’s’ teeth have a lot of problems, problems that you wouldn’t see in an area with better access to care. That level of basic oral health is something that we often take for granted.”

Held also emphasized what hard workers both students were. She said, “The guys did a fantastic job. I was amazed by their treatment planning; they addressed every issue in each patient.”

Oftentimes on mission trips the volunteers must prioritize the needs of each patient and are only able to treat the most pressing, due to a large volume of patients and limited time. But on this trip the volunteers somehow made the time to treat all issues. Smith said in one child’s mouth he extracted six teeth and restored four using ART. Kramer said he came close to treating ten teeth in one patient as well.

But Held took this “address every issue” mentality even one step further. Prior to the trip she organized a shoe drive and received and transported two suitcases full of children’s shoes and another suitcase full of toothbrushes to Rio San Juan, which she passed out to the children who were treated, many of whom had arrived barefoot.