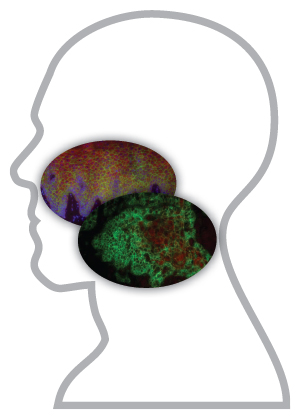 Head and neck cancer represents the sixth most common cancer in the world, with oral cancer accounting for the majority of cases. From about 40,000 people diagnosed with oral cancer each year about 8,000 will die from the disease. Worldwide, new cases exceed 640,000 annually and their incidence is on the rise. Unlike other cancers, the statistics on oral cancer are startlingly sinister: half of oral cancers are not diagnosed until the cancer has spread to nearby tissues, at which stage the 5-year survival rate is 53 percent. Further, treatments used at later stage diagnosis are often painful and include disfiguring surgeries of the lip, tongue, cheek, jaw or neck, which are associated with eating and swallowing difficulties. Chemotherapy and radiation to the head and neck can also cause jaw pain and they are associated with dry mouth due to salivary glands dysfunction and mouth sores.

Oral cancer ranks among the most understudied cancers with little information available about molecular mechanisms underlying its etiology and progression. Likewise, no molecular biomarkers are available to inform decisions about treatment of this disease. Disconcertingly, oral cancer targets particularly underserved minorities who are highly represented within the BUMC patient population and in developing countries.

In order to address the need for cutting edge research on oral cancer, scientists and clinicians at Boston University organized the Oral Cancer Research Initiative (OCRI). The OCRI was launched in November of 2011 as a multidisciplinary collaboration aimed at identifying the underlying mechanisms of oral cancer development and progression, with the long-term goal of translating research into diagnosis, prevention, treatment and cure.

During its first year, the OCRI identified and developed a number of translational projects which fostered collaborations between members of Boston University’s basic science and clinical faculty. Initially, with the support of seed funding from the Henry M. Goldman School of Dental Medicine, investigators organized thematically focused projects on oral cancer and generated encouraging results supportive of the initiative. By the spring of 2011, the OCRI Internal Advisory Board had been established, bringing together the leadership expertise of both clinicians and researchers from within BU. In the fall of 2012, five major projects were selected for a planned application for infrastructure funding from the Specialized Program of Research Excellence (SPORE) from the National Cancer Institute/National Institute of Dental and Craniofacial Research (NCI/NIDCR) at the National Institutes of Health (NIH). In November of 2012, Boston University hosted its first OCRI External Advisory Board meeting, an event which invited a panel of experts from across the country to offer their experience and guidance for the development of a competitive SPORE application. The following month, at the suggestion of the External Advisory Board to increase access to head and neck cancer patients enrolled in clinical trials, a partnership was formed between the BU OCRI and the Dana-Farber Cancer Institute.

At the end of 2012, five OCRI projects formed a pre-ARC (pre-Affinity Research Collaborative) of the Evans Center for Interdisciplinary Biomedical Research, focused on the Etiology and Pathogenesis of Oral Cancer (EPOC).  The goals of the EPOC pre-ARC have been to align research themes into multidisciplinary collaboratives to advance research on oral cancer and to enhance graduate and post-graduate programs at BU. Based on ongoing productive collaborations and focused interdisciplinary research approaches, EPOC will apply for the ARC status in November 2013.

Currently, the EPOC investigators are developing translational research programs supported by publications and application for federal and non-federal funding. These programs were subsequently evaluated at the next External Advisory Board meeting which took place on November 21-22, 2013, at the Hotel Commonwealth located adjacent to the Charles River Campus.

The Research office offers pre-submission grant review assistance to all GSDM faculty, residents and students. This service is offered to any member of the GSDM community who intends to apply for extramural funding. The Research office will solicit the help of established researchers on the Boston University Medical Campus. Their expertise will help ensure that GSDM grant submissions are competitive and of the highest quality. For more information, please contact us at: GSDMR@bu.edu