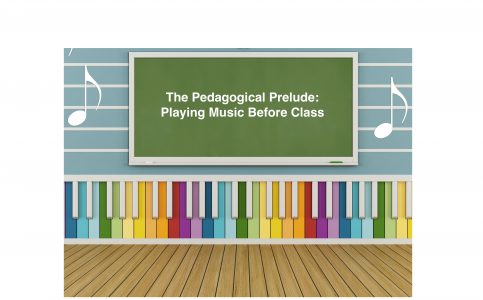 Contributed by Deb Breen, with thanks to Steve Donweber and Irit Kleiman

Music educators have long known that the benefits of listening to music in the classroom are manifold: as a way of creating an atmosphere for learning by either calming or stimulating the senses; as background sound that can heighten focus; and, as an introduction to different forms of information about culture, language, and, of course, music! Music integrated into the curriculum offers a complementary and enriching way of learning. This semester, inspired by the work of two colleagues, Irit Kleiman (Romance Studies) and Stephen Donweber (Law), I have been experimenting with music before class starts.

Prof. Donweber has been playing music before classes for several years, but suggests that it has been even more important in this year of remote and hybrid learning. He comments, “It’s fun and helps with class energy. It also gives students something to listen to, rather than simply staring at a silent screen, when they sign into Zoom.” Additionally, he suggests, “It’s important for faculty to amp up their presentations during LfA.  Whatever folks do should be boosted a level or two when so many of our students are remote.” In Steve’s Law classes, students are energized and ready to learn as class begins; they are also ready to figure out how the music relates to their topic of the day: it’s chosen to have that connection.

In the ten minutes before the start of her classes on the literatures and cultures of medieval France, Prof. Kleiman chooses from a playlist of music in French or from the Francophone world. The music is “thematically connected in a general way, but not to the specific course contents in terms of lyrics-daily syllabus topic,” although sometimes Irit shares “a little trivia or vocabulary from a lyric.”  She reports that using music as an entry point into the class has been a “very, very effective icebreaker.” In her view, the “shared sound-space is a good way to be ‘together’ virtually” and is an effective transition for students into the Zoom space.

Both Steve and Irit report the positive impact of starting their classes with music: it “helps to create a positive affective, learning receptive mood,” Irit suggests. Inspired by their experiments, I have also been using music as a way to establish different kinds of connections with and for my students. My academic writing class has a focus on the meaning of community, so I have been starting each class with music that connects in some way to that theme.

Although both Stephen and Irit emphasize the upbeat (“No sad songs!” Irit suggests), I have roamed widely through mood, genre, period, and nationality of music: from the calm of Yo-Yo Ma playing the prelude to Bach’s Cello Suite in G Major as part of his Silk Road project, to the melancholy of “Androu Ma Pai”, a 1950s Greek-Italian song about men leaving their communities to look for work, to the infectious celebration of women in “Antipatria” by French-Chilean rapper Ana Tijoux (to celebrate International Women’s Day), to the joyous community demonstrated by online choirs, and the rousing solidarity of sports crowds singing “Oh Flower of Scotland” before a rugby game – and lots of other points in between.

Many of the choices connected to our reading for the day or more generally to current events. For example, to connect to the many spring rituals and holidays, we played a fun video of a student flash mob celebrating Holi at UC Boulder with Bollywood music and dance – this was an entry into a conversation about community and family rituals. Students have also suggested songs – we use Pronto to post about selections and some context for these musical choices.

Both Steve Donweber and Irit Kleiman agree that the musical prelude to class has pedagogical benefits in enhancing the readiness of students to start the intellectual work of the day. Students log on early to hear and watch the videos. Anonymous feedback from my students at mid-semester supports this anecdotal evidence: the musical introduction to class got an unequivocal thumbs-up from the students. In the remaining weeks of semester, consider experimenting with this “pedagogical prelude” – we’d love to hear about your experiences if you do!

The Neuroscience of Stress and Learning