The Power of the Special Guest on Zoom 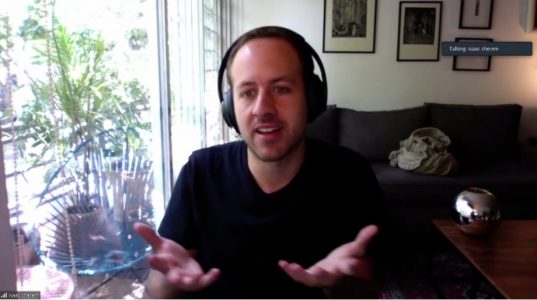 Thanks to the generous support of the CTL and the Hub Office, we were able to host last month the Mexican filmmaker Isaac Cherem for a special conversation and Q&A on his debut feature film Leona (2018). Cherem joined our Zoom classroom along with students enrolled in my Spanish Through Film and New Media (LS308) and other guests, including past students. Since it was a virtual event, attendees were able to join from all over the United States, from Caguas (Puerto Rico,) and Mexico City.

In his initial remarks about the contentious reception of the movie and the creative process, we all learned more about the remarkable collaboration between the director, the main actress Naian González Norvind (who also co-wrote the script), the artist-muralist Caitlin Herrschaft, and the acclaimed film score composer Jacobo Lieberman. This glimpse of the making of Leona revealed invaluable insights about the art of cinematography especially its collaborative nature and adjusting expectations as production challenges and financial constraints arise. Later, when we reflected on the visit, a student said that this was his first time attending a Q&A with a film director: “I really enjoyed hearing about the movie from the director’s point of view!”. I could not agree more!

Throughout the event, students were very engaged, taking notes, and asking questions about the making of the film and the history of Syrian-Jewish communities in Mexico. One of the highlights of the director’s talk was gaining an invaluable understanding of the vibrancy of contemporary Jewish life in Mexico, how traditions from Aleppo and Damascus were passed down to generations and their position within other Jewish communities such as the Ashkenazi Jews. At the same time, Cherem expressed his desire to start an intergenerational dialogue to question the distinctive features of close-knit communities especially what he called “sistemas de confianza” in interpersonal relationships. Thanks to his talk, students were also able to see how the lines between reality and fiction are blurry in Leona since the main conflict is inspired by his own personal life. The movie can also be perceived as a coming of age story which then allows other enriching interpretations.

Lastly, the event provided an unparallel linguistic immersion as it was conducted entirely in Spanish. Students said that it was empowering to be able to ask questions in Spanish and understand the answers, while learning new vocabulary, idiomatic and regional expressions. The director also shared more about his future work and the challenges of making films during the pandemic. He concluded by extending a warm invitation to continue the conversation as he gave his contact information to the class. The event was extremely successful and surpassed our expectations as a remarkably enriching academic event.

Supporting Students in the First Weeks of Semester

Keeping On In Challenging Times