The first silver bowls went to Isabella Bolivar (’17) and Michael Philbin (’17), for their Bose Hear it All campaign, a clever series of posters that depicts famous album covers with something visibly missing. “We knew we’d gotten to something when Michael asked, ‘What is this thing about art, that it’s not the same to see it in a museum as it is to see it on your phone?’ We had talked about seeing Monet’s Water Lilies at the MoMa and seeing it on Instagram. That was the truth we needed to get through in our campaign” said Bolivar. “We started coming up with examples and asking, what would Kiss be without their makeup? What if you couldn’t hear McCartney’s voice in a Beatles song?” 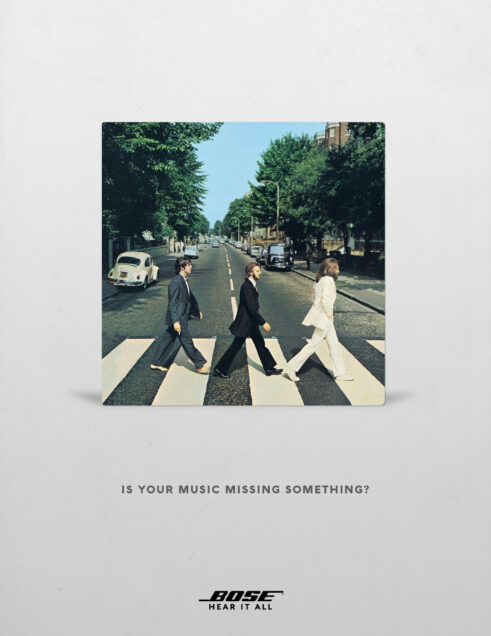 “There’s something great about student work. You can let your head explode with ideas, but you need to ground them in strategy.”

Isabella is now an art director at Henri Bendel in NYC, and Michael is a copywriter at MMB in Boston.

A second silver was awarded to graduate students Sarah Pierz (’18) and Huang Huang (’18) for an idea titled 115th Congress, Twice Removed, that showcases how Congress might get along better if members realized they actually had a shared family history.

Among the merit winners were Jess Gelbwaks (’17) and Laura Bailey (’17) for Maxwell House; Michael Philbin and Elisabeth Bowerman (’17) for Fidelity Investments; Eduardo Zigelboim and Crystal Phyu for Spotify; and graduate students Sarah Pierz, Shiyang Wang (’18) and Shuqi Yan (’18) for OFF!.

Athanasia Efthimiu (’16) was among those credited for Best of Show winner Jet Blue’s Fly Babies and dozens of COM grads, now working in Boston agencies went home with a variety of awards for campaigns they created at agencies that include Arnold Worldwide, MullenLowe, Connelly and Partners, MMB and others.

This year’s winning students were all members of portfolio classes taught by Professors Edward Boches and Pegeen Ryan.

The 57th Annual Hatch Awards were held at the House of Blues.

Dealing with a New Reality: What's Next for Reality TV

Seeing and Being Seen: Pose and the Impact of Black LGBTQ Stories
View All Events