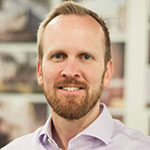 Mark Pasnik, AIA, is an architect and founding principal of over,under, a Boston-based architecture and design practice. He co-directs the firm’s pinkcomma gallery, through which he has helped curate more than thirty exhibitions, most recently including the Design Biennial Boston and an exhibition on Pittsburgh’s modernism at the Carnegie Museum of Art. Mark has taught at the California College of the Arts, Carnegie Mellon University, Northeastern University, Rhode Island School of Design, and Wentworth Institute of Technology, where he is an associate professor. He received the AIA Young Architects Award in 2013 and serves on the Boston Art Commission and the executive board of the Boston Society of Architects. With Michael Kubo and Chris Grimley, he has authored Heroic: Concrete Architecture and the New Boston, published by The Monacelli Press in 2015.