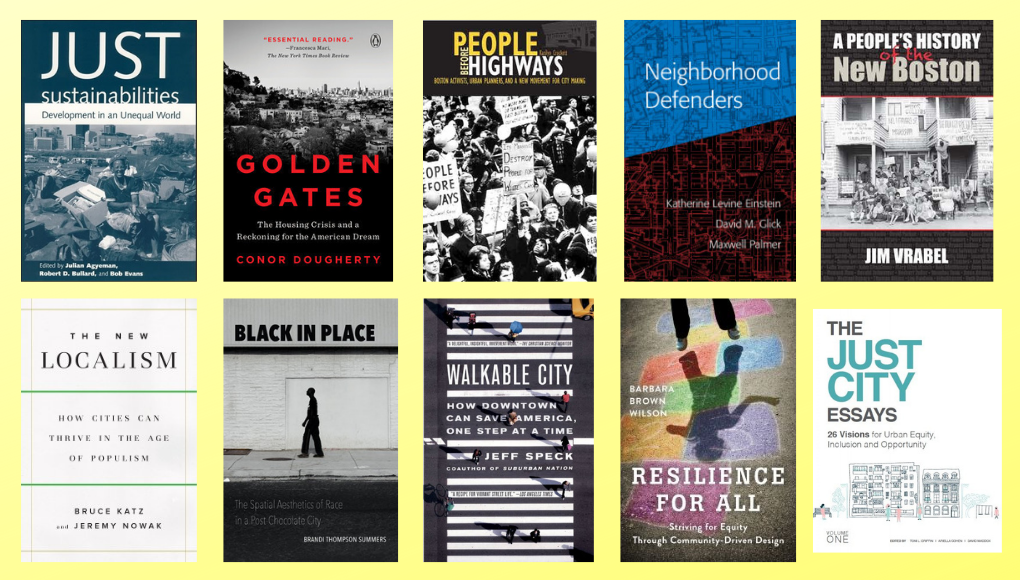 The Spring semester is coming to a close, and the Summer promises some much-needed R&R. But just because your classes have ended doesn’t mean that your learning should be put on pause. If you have some spare time in the months ahead, check out these 10 titles recommended by CPUA faculty and staff:

“Spacious and affordable homes used to be the hallmark of American prosperity. Today, however, punishing rents and the increasingly prohibitive cost of ownership have turned housing into the foremost symbol of inequality and an economy gone wrong … With propulsive storytelling and ground-level reporting, New York Times journalist Conor Dougherty chronicles America’s housing crisis from its West Coast epicenter, peeling back the decades of history and economic forces that brought us here and taking readers inside the activist movements that have risen in tandem with housing costs.” ~Penguin Random House

“In 1948, inspired by changes to federal law, Massachusetts government officials started hatching a plan to build multiple highways circling and cutting through the heart of Boston, making steady progress through the 1950s. But when officials began to hold public hearings in 1960, as it became clear what this plan would entail—including a disproportionate impact on poor communities of color—the people pushed back … Linking archival research, ethnographic fieldwork, and oral history, Karilyn Crockett in People before Highways offers ground-level analysis of the social, political, and environmental significance of a local anti-highway protest and its lasting national implications.” ~UMass Press

“The book draws on sweeping data to examine the dominance of land use politics by ‘neighborhood defenders’ – individuals who oppose new housing projects far more strongly than their broader communities and who are likely to be privileged on a variety of dimensions. Neighborhood defenders participate disproportionately and take advantage of land use regulations to restrict the construction of multifamily housing. The result is diminished housing stock and higher housing costs, with participatory institutions perversely reproducing inequality.” ~Cambridge University Press

A People’s History of the New Boston

Read if you’re interested in: grassroots activism, history of Boston

“Although Boston today is a vibrant and thriving city, it was anything but that in the years following World War II. By 1950 it had lost a quarter of its tax base over the previous twenty-five years, and during the 1950s it would lose residents faster than any other major city in the country. Credit for the city’s turnaround since that time is often given to a select group of people, all of them men, all of them white, and most of them well off. In fact, a large group of community activists, many of them women, people of color, and not very well off, were also responsible for creating the Boston so many enjoy today. This book provides a grassroots perspective on the tumultuous 1960s and 1970s, when residents of the city’s neighborhoods engaged in an era of activism and protest unprecedented in Boston since the American Revolution.” ~UMass Press

The New Localism: How Cities Can Thrive in the Age of Populism

By Bruce Katz and Jeremy Nowak

“In The New Localism, Katz and Nowak tell the stories of the cities that are on the vanguard of problem solving. Pittsburgh is catalyzing inclusive growth by inventing and deploying new industries and technologies. Indianapolis is governing its city and metropolis through a network of public, private and civic leaders. Copenhagen is using publicly owned assets like their waterfront to spur large scale redevelopment and finance infrastructure from land sales. Out of these stories emerge new norms of growth, governance, and finance and a path toward a more prosperous, sustainable, and inclusive society.” ~Brookings Institution Press

Black in Place: The Spatial Aesthetics of Race in a Post-Chocolate City

“While Washington, D.C., is still often referred to as ‘Chocolate City,’ it has undergone significant demographic, political, and economic change in the last decade. In D.C., no place represents this shift better than the H Street corridor. In this book, Brandi Thompson Summers documents D.C.’s shift to a ‘post-chocolate’ cosmopolitan metropolis by charting H Street’s economic and racial developments.” ~UNC Press

Walkable City: How Downtown Can Save America, One Step at a Time

“Jeff Speck has dedicated his career to determining what makes cities thrive. And he has boiled it down to one key factor: walkability. Making downtown into a walkable, viable community is the essential fix for the typical American city; it is eminently achievable and its benefits are manifold.” ~Barnes & Noble

Resilience for All: Striving for Equity Through Community-Driven Design

Read if you’re interested in: community-driven planning and design

“In Resilience for All, Barbara Brown Wilson looks at less conventional, but often more effective methods to make communities more resilient. She takes an in-depth look at what equitable, positive change through community-driven design looks like in four communities—East Biloxi, Mississippi; the Lower East Side of Manhattan; the Denby neighborhood in Detroit, Michigan; and the Cully neighborhood in Portland, Oregon. These vulnerable communities have prevailed in spite of serious urban stressors such as climate change, gentrification, and disinvestment.” ~Island Press

Read if you’re interested in: urban development and justice

“Our organizations, The J. Max Bond Center on Design for the Just City at the City College of New York, The Nature of Cities, and Next City, have built our respective missions around creating and disseminating knowledge, reporting and analysis of the contemporary city … Our shared values brought us together to produce the first volume of The Just City Essays. The outreach to our invited 24 authors began with two straightforward questions: what would a just city look like, and what could be strategies to get there? We raised these questions to architects, mayors, artists, doctors, designers, scholars, philanthropists, ecologists, urban planners, and community activists. Their responses came to us from 22 cities across five continents and myriad vantages. Each offers a distinct perspective rooted in a particular place or practice. Each is meant as a provocation—a call to action.” ~Next City

From CPUA, have a great summer and happy reading!