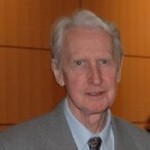 Ronald Milburn retired in 1998 after a 41-year career at Boston University.  He joined the Department of Chemistry as an assistant professor in 1957 and was promoted to full professor in 1968.  His research focused on iron complexes and was funded by the Research Corporation (1957), the National Institutes of Health (NIGMS, 196-1965), the National Science Foundation (in a series of awards between 1959 through 1982), and the Petroleum Research Fund (1982, 1990).  He taught nearly 20 undergraduate and graduate Chemistry courses in his career at BU.  His sabbatical leaves took him to do research at Oxford University, the Australian National University, the University of Basel, and the Australian National University.  Prof. Milburn was born in Wellignton, New Zealand, and because a naturalized American in 1963.