Guilford Jones retired after 38-years at Boston University.  An alumnus of Rhodes College (Memphis, TN), he completed graduate work at the University of Wisconsin, Madison, with the widely recognized photochemist, Howard Zimmerman.  Professor Jones was an NIH Postdoctoral Fellow at Yale University, studying physical organic chemistry with Jerome Berson. He joined the BU faculty in 1971 where his early research in the chemistry of small-strained – ring organic compounds focused on energy storing photoreactions.  His later work centered on photochemical conversion of energy (‘artificial photosynthesis’) focusing on photoinduced electron transfer that can be observed with fast-pulse laser techniques.  A particular research interest involved charge transport that can be conducted among reactive elements positioned in the microdomains of polymers and biopolymers (e.g., helical scaffolds).

Professor Jones held many leadership roles at Boston University.  As Chemistry Associate Chair, he provided guidance in the early establishment of a biotechnology curriculum for the College.  He also served two terms as Chemistry Chair.  He led the Organizing Committee that obtained the original funding to establish the BU Photonics Center and co-founded one of the Center’s early incubator companies, PhotoSecure, Inc.

Gil Jones was active at international meetings and served on organizing committees (e.g., International Symposium on the Photochemical Conversion of Solar Energy), chairing the 2002 Electron Donor-Acceptor Interactions Gordon Conference.  He authored/coauthored over 200 publications and book chapters.

Professor Jones was a significant presence in the classroom and was a dedicated mentor.  His most important educational contributions came in the teaching of Organic Chemistry (CH 203-204).  He brought abundant energy and a caring attitude to this class, which is traditionally viewed with some dread by most pre-professional students.  They responded to the simple models and patterns that he created to define difficult topics and, on the lighter side, his invitation to join the ‘church of what’s happenin’ now’.  Professor Jones also founded a long running course in Physical Organic Chemistry, a popular elective in the chemistry graduate curriculum.   His mentoring legacy includes 28 PhD students and 18 Masters level students. 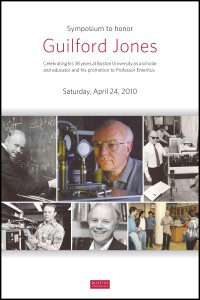 Gil Jones’ retirement celebrations occurred on Friday, April 23, 2010.  The celebration was followed by a symposium in his honor attended by his former students and colleagues.