Morton Z. Hoffman retired in 2005 after a 44-year active career at BU.  A graduate of the Bronx (NY) High School of Science and Hunter College of the City University of New York, he received a Ph.D. in physical chemistry from the University of Michigan. His thesis research on mercury photosensitized gas-phase reactions was directed by Dr. Richard B. Bernstein.  He spent a year as a postdoctoral research associate in the laboratory of Dr. George Porter at Sheffield University in England where he studied the dynamics of the triplet states of aromatic hydrocarbons in fluid solution through the use of flash photolysis.

In 1961, Professor Hoffman joined the BU chemistry faculty to contribute to the design of, and participate in, the first-year general and physical chemistry course for the newly-created Six-Year Combined Liberal Arts-Medical Program.  His research efforts moved from gas-phase photochemistry to the relatively new area of the photochemistry of transition-metal coordination compounds in aqueous solution.  Grant support enabled him to construct a microsecond flash photolysis apparatus for the study of excited-state electron-transfer and ligand-labilization processes.  A sabbatical leave at the US Army Natick Laboratories in 1969-70 introduced him to the field of radiation chemistry and the application of sub-microscecond fast-kinetics pulse radiolysis to problems involving metal complexes in unusual oxidation states, the reactions of free radicals in solution, and the characterization of coordinated ligand-radicals.  His research work, which was supported over the years by NSF, the Department of Energy, and the Department of Defense, expanded to involve the photochemical conversion and storage of solar energy, the photophysics of luminescent metal complexes, and the use of nanosecond pulsed-laser techniques to probe excited-state behavior.  Over the course of his active research career, he mentored nine Ph.D. and 17 M.A. students, 12 postdoctoral research associates, and 23 undergraduate researchers.  He also collaborated with faculty, senior scholars, and scientists from Italy, France, Germany, Greece, England, Israel, and Japan.  He is an author on almost 200 papers in the refereed chemical literature.

Professor Hoffman held many positions of leadership at Boston University.  Within the Chemistry Department, he served as Associate Chair for Undergraduate Affairs, working to make the undergraduate chemistry curricula less rigid (but no less rigorous) and more “user-friendly” for students wishing to gain study-abroad and expanded research experience, and a faculty advisor for Chemia, the undergraduate chemistry student organization, helping to bring the group into national prominence.  In the College of Arts and Sciences (CAS), he spent two terms as Acting Associate Dean, many years as chair of the Pre-medical Pre-dental Advisory Committee, and was the Founding Director of the Center for Teaching Excellence (1994-97).  At the university level, he served as CAS representative to Faculty Council and as University Marshal (1996-2005).  He has also been a long-time member of the Board of Directors of Boston University Hillel, and served two years as its President.

Outside BU, Mort Hoffman has been very active in the American Chemical Society (ACS) on a local, regional, and national level.  He served as Chair of the Northeastern Local Section (NESACS), Chair of the Division of Chemical Education (CHED), and is a member of the Board of Directors of the Northeast Region, Inc.  He represents NESACS on the ACS Council, is a member of the Society Committee on Education (SOCED), and recently joined the ACS Senior Chemists Task Force.  Internationally, Professor Hoffman was appointed by the National Academies of Science to be the U.S. National Representative to the Committee on Chemistry Education (CCE) of the International Union of Pure and Applied Chemistry (IUPAC).  In addition, he is an active member of the Organizing Committee of the “Malta” Conferences on Science and Education in the Middle East, the goal of which is to bring together chemists from the nations in the Middle East for conversation and collaboration toward peace and a more promising future for that troubled part of the world.  During his retirement, he has worked with BU International Programs in the development of study-abroad science programs in Dresden, Germany, and Grenoble, France.

In addition to teaching undergraduate physical and analytical chemistry courses, and graduate courses in chemical kinetics, photochemistry, and radiation chemistry, Professor Hoffman’s main teaching activities were in general chemistry: CH101-102, CH111-112, CH161, and early in his career, CH181-182.  Remembered by thousands of students for his theatrical lecturing style, dramatic chemical demonstrations, innovative pedagogies, and outrageous jokes and puns, he was honored in 1994 with the Metcalf Cup and Prize for Excellence in Teaching.

Mort Hoffman’s retirement celebration on Friday, November 18, 2005, included a departmental symposium in his honor on recent advances in chemical education, which was followed by a joyous party at the Agganis Arena that was attended by family, friends, colleagues, former students and co-workers, and representatives of the ACS, including its President, past and present members of the ACS Board of Directors, and other world-renowned chemists. 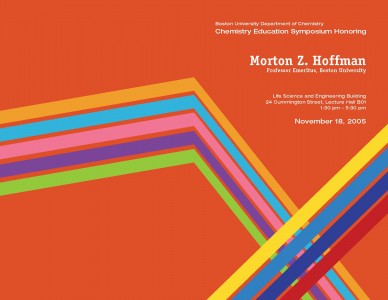 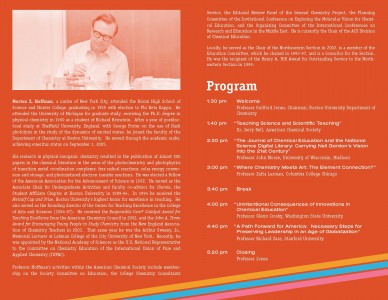