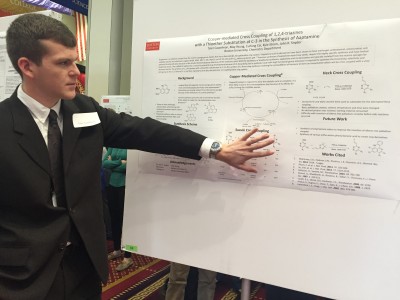 Undergraduate student Tyler Casselman, a rising Junior doing research in Prof. John Snyder’s laboratory, is the 2016 recipient of the Laursen Summer Research Scholarship (LSRS).  Tyler’s summer research continues his investigations in the Snyder group into a synthesis of drug transport within a polymer.  His work focuses on developing a procedure to integrate a highly reactive ring system, known as a tetrazine, into polymers. This has an immediate application to drug transport within a polymer via a cycloaddition, which will further the research of the Snyder Group.

Tyler, who is 21 and comes from East Amherst, New York, is interested in natural product synthesis and diversification methods.  Once done with his undergraduate education here at BU he plans to continue his study chemistry in graduate school and is hoping to stay in the Boston area.

The scholarship is funded by the Laursen Endowment, which was created to honor Prof. Emeritus Richard Laursen by his former students. The goal of the Laursen Endowment is to advance the training of highly qualified BU chemistry students interested in pursuing scientific careers by providing salary support pursue research during the summer term.