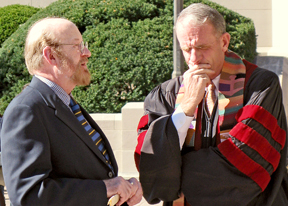 A regular feature of the preaching ministry at Marsh Chapel involves sermons set in series. Some of these are given by guests in the summer, and occasionally there have been series for advent or lent. However, the autumn Sundays from Matriculation through Thanksgiving are the most frequent occasion for sermons in series. A series allows the development over several weeks of a poetic theme (2006), or an historical reflection (2007), or a geographical orientation (2008), or even a particular angle of vision on the lectionary readings for the season (2009). Marsh Chapel has tried over the years to provide regular offerings of sermons in series.

2017 Lenten Series:  In Conversation with Nouwen

2009  A Tale of Two Marks:  Mark as Moderate Critic and Critical Moderate