The Casavant Organ Opus 2000 at Marsh Chapel was made by Casavant Fréres, Limited in Quebec, Canada, and installed when the Chapel was built in 1950. The organ is adjudged to be one of the finest in this part of the country, and is especially noted for its high quality and appropriateness of sound in performing French Romantic organ literature. It was donated to Boston University by the generous gift of the Honorable Guy W. Cox. The rebuilding of the Casavant in 1985 was made possible by the generous gift of Thomas C. Reed.

The organ is an essential part of the architectural design of the Chapel’s interior. The organ screens include several carved panels, featuring figures of bells, a lyre, clef scrolls, and music staffs. The central panels depict St. Gregory, the namesake of Gregorian chant, with a dove on his shoulder and holding a monochord; as well as St. Cecilia, patron saint of music, holding a portable organ. The role of music in the Church and in Marsh Chapel is also evident in the two newel posts flanking the choir stalls, on which are carved the heads of Georg Friedrich Handel and Johann Sebastian Bach.

On March 24, 1985, the re-built Casavant organ was dedicated “to the Glory and Praise of God in Service and Concert” at the University Service of Worship. Dean of the Chapel, Robert Watts Thornburg led the congregation in a dedication litany. Dr. Max Miller, University Organist and Choirmaster until 1990, played for the service. In 1990, the University Organist and Choirmaster was Julian Wachner, FAGO, who had previously served as the assistant to Dr. Miller. In 2001, Dr. Scott Allen Jarrett took the illustrious position. As Music at Marsh Chapel expanded the position was split and now Dr. Scott Allen Jarrett is the Director of Music and Justin Thomas Balckwell is the Associate Director of Music and Organist.

The Casavant Organ Opus 2000 at Marsh Chapel was made by Casavant Fréres, Limited in Quebec, Canada, and installed when the Chapel was built in 1950. During early 2004, it underwent renovation to its console, with work done by Thad Outerbridge. 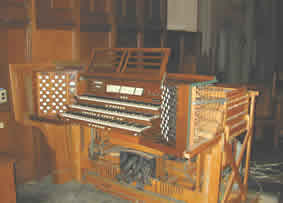 The 1985 console on its last day at Marsh Chapel. 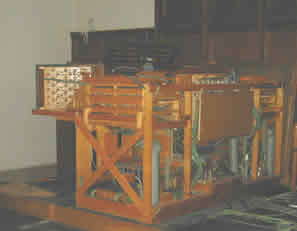 Rear view of the 1985 console. Note the mechanical relays and original 1950 wiring which has all been replaced with digital, solid-state relays and new wiring. This will make the combination action much more reliable. This console is now in storage and will be refitted for use elsewhere on campus. 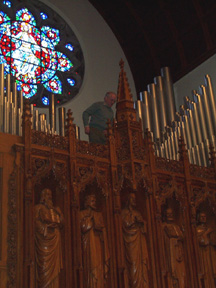 Mr. Outerbridge looks down from the pipes of the organ at the top of the chancel at the new console. 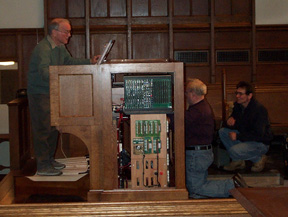 Mr. Outerbridge is assisted by Dick Houghton (middle) and Armand Furtado (right) while checking the electrical work done on the new console. 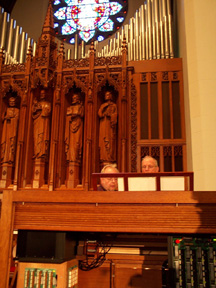 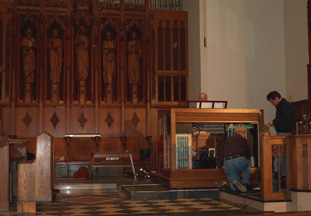 The entire console was removed from its normal position, in order to work on it over the weekend of February 13th and 14th, 2004.