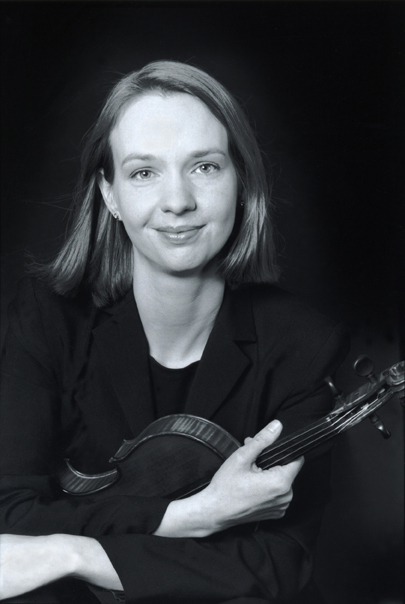 Violinist Heidi Braun-Hill has been affiliated with chamber music series’ presented by Emmanuel Music, Winsor Music, Apple Hill Center for Chamber Music, Firebird Ensemble, the Chameleon Arts Ensemble, Alea III, and the Warebrook Contemporary Music Festival. Since 1999, she has been a soloist in Emmanuel Music’s Bach Cantata series, having performed over 150 cantatas, and for the 2008-09 concert season she had the honor of being a Lorraine Hunt Lieberson Fellow at Emmanuel Music. In 2001 and 2004, she performed in the Peter Sellars’/Craig Smith production of “Bach Cantatas BWV 82 and 199” with Lorraine Hunt Lieberson which was presented in Boston, New York, Paris, London, Lucerne, Amsterdam, and Vienna. Ms. Braun-Hill is a frequent and comfortable performer of new music and has premiered chamber works by Martin Boykan, Edward Cohen, and Allen Anderson. In recent years, she has been privileged to work closely with composer John Harbison and violinist Rose Mary Harbison on several projects.

Ms. Braun-Hill is engaged as a freelancer with many Boston groups, including Opera Boston, Cantata Singers, Boston Modern Orchestra Project, Rhode Island Philharmonic, and the Boston Symphony Orchestra and is sought-after as a concertmaster. She has served in this capacity with the Orchestra of Emmanuel Music, Back Bay Chorale, the Marsh Chapel Collegium at Boston University, New England String Ensemble, the Chamber Orchestra of Boston, and the Vermont Symphony Orchestra. She has played under the batons of conductors Craig Smith, John Harbison, David Hoose, Scott Allen Jarrett, Larry Rachleff, Ryan Turner, Seiji Ozawa, Julian Wachner, Gil Rose, Keith Lockhart, Maxim Shostakovich, Neemi Järvi, and Robert Henderson. In addition, she has played in support orchestras for the Mark Morris Dance Group, Andrea Bocelli, and others, and has made recordings with various groups on the Arsis, Nonesuch, Naxos, and Albany Records labels.

Ms. Braun-Hill came to Boston from Arkansas where she was a member of the first violin section of the Arkansas Symphony Orchestra as the youngest person in that orchestra to secure a position by audition. While in Arkansas, she was the recipient of many prizes for young artists, including a prestigious award presented by Governor Bill Clinton.

Ms. Braun-Hill is passionate about arts education and participates in musical outreach programs in Boston-area schools for Emmanuel Music’s Community Connections. She is a graduate of Boston University, where she studied with Peter Zazofsky. Her other teachers have included Kevork Mardirossian and Routa Kroumovitch. She is currently on the music faculty at Phillips Exeter Academy in New Hampshire and lives in Boston with her husband and their two young children.