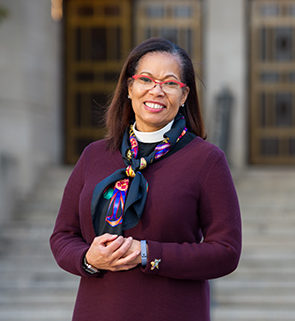 The Rev. Dr. Karen Coleman serves as the University Chaplain for Episcopal Ministry. She also serves as a Spiritual Director through the Office of Spiritual Life at BU STH. Rev. Coleman recently served as rector of St. James Episcopal Church, Somerville from 2010 until October 2017.  She was the first African-American woman installed as a rector in the history of The Episcopal Diocese of MA.

Prior to becoming rector/chaplain, she served as the priest-in-charge of Trinity Church, Randolph, and as an assistant priest at Christ Church in Needham. She is a graduate of the University of Michigan where she holds a B.A. in Art History and a masters and doctor of ministry degree from Episcopal Divinity School in Cambridge. The title of her thesis was “Episcopal Female Clergy Leaders of African Heritage: Trailblazers and Colleagues”.  She served two years as a seminarian at Trinity Church, Boston, and as a transitional deacon at St. James’s Church in Cambridge.  She was ordained to the priesthood in 2004.  Prior to her seminary studies, she worked as the assistant director of alumni relations and development at East Stroudsburg University in Pennsylvania and as a fund development consultant for Girl Scouts of the USA, NYC.

She currently serves on the Episcopal Diocese of MA Diocesan Council, is a member of the Diocesan Disciplinary Board, and is the diocesan clerical representative to the Provincial Synod of New England Episcopal dioceses.  In her spare time she is actively involved with her sorority, Alpha Kappa Alpha, is a master canner and needlepoints.  She is married to James Reamer and her stepdaughter Lindsay Reamer is a graduate of Boston University.