motive (always spelled with a lowercase “m”) was the official magazine for the Methodist Student Movement from its founding in 1941 and, for a few years at the end of its life, for the entire University Christian Movement (UCM). Much celebrated even at the time for its avant garde editorial and artistic vision, in 1966 Time magazine said it stood out among church publications “like a miniskirt at a church social.” It was the single runner-up to Life as Magazine of the Year in 1965. Ultimately, its strong stands on civil rights, Vietnam, and emerging gender issues became more than the Methodist Church officials could take. The magazine ceased publication in 1972. Even so, an entire generation of religious activists were shaped by its vision. On this site, we will explore what it was and what it meant. 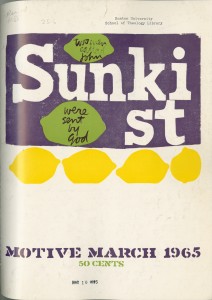 On September 16, 2015 a digital run of all the motive magazines went live; all, that is, but one. The final issue had notoriously been blocked by the United Methodist Church from being printed. To commemorate motive's digitization, B. J. Stiles, the last editor of motive magazine, donated his prints of that final issue to the School of Theology to make the collection complete.

Beside the gift, a Reader's Theater was organized to capture the impact motive had on various people's lives. The evening concluded with Frank Lloyd Dent, Tom F. Driver, and B. J. Stiles reflecting on the significance of motive, both for them personally and as a religious gadfly. Their talks are available below.

On September 16, Boston University School of Theology and the General Board of Higher Education and Ministry will celebrate the launch of a website that digitizes motive magazine and makes it accessible to a new generation of scholars and leaders. motive magazine shaped a generation of young, passionate activists and leaders. The event will feature an art display beginning at 4:30 pm and a celebratory event at 5:00 pm, with a Readers' Theater, presentation of the new website, and panelists.

motive was the official magazine for the Methodist Student Movement from its founding in 1941 and, for a few years at the end of its life, for the entire University Christian Movement (UCM). Much celebrated even at the time for its avant-garde editorial and artistic vision, in 1966 Time magazine said it stood out among church publications “like a miniskirt at a church social.” It was the single runner-up to Life as Magazine of the Year in 1965. Its strong stance on civil rights, Vietnam, and emerging gender issues were provocative at the time and the magazine ceased publication in 1972.

The Center for Global Christianity and Mission in collaboration with the School of Theology Library has made all of the issues available online and searchable. This event will mark the launch of the new resource on the Church, the student movement, and critical issues from the middle of the 20th century.

Panelists include:
B.J. Stiles, former editor of motive magazine;
Frank Lloyd Dent, author of the dissertation motive magazine: Advocating the Arts and Empowering the Imagination in the Life of the Church; and
Tom Driver, contributor to motive magazine and retired professor at Union Theological Seminary.

In a recent essay, Chris Evans explored important questions scholars need to raise when they think about American Methodism, particularly after the Civil War. One way to reconsider the role of Methodism, Evans argued, would be to look at the role of Methodist young people, citing the motive magazine as a rich and untapped source. The Center for Global Christianity & Mission will have the entire run of motive available for digital research in September 2015.

Reflections on the Methodist Historical Pie

Stiles’ Lecture Up on BUniverse!

A new Washington Post story about Hillary Clinton's time as Secretary of State describes her as "a wonky Methodist who believes she is supposed to make good things happen." Clinton has in the past credited motive magazine as an important formative influence. You can find the story here.

Income Inequality in Election Years Past

A cartoon by motive cartoonist Jim Crane in 1960 and a print by Robert Hodgell in 1968 both address the issue of income inequality and how people think about their money. Either could have been done yesterday. The Hodgell print was included in a recent Eckerd College exhibit, "Robert Hodgell in an Election Year."

With support from the Society for the Arts in Religious and Theological Studies, 1960s-era motive magazine editor, B.J. Stiles, and Ada Focer, Research Director of CGCM, were able to travel to St. Petersburg, Florida to meet with 1950s and 1960s-era motive artist Jim Crane, best known for his cartoons, and the people at Eckerd College where Crane, Peg Rigg, and Robert Hodgell all worked for decades after motive shut down, who are preserving and exhibiting these artists' work.

Peg Rigg was hired as art editor in 1955 right out of seminary. She also had a M.F.A. at the Chicago Art Institute. She had interned at motive the prior summer so the editor, Roger Ortmeyer, had had a chance to see her at work. Although motive had been deeply involved with the arts since its inception, it was Rigg that gave it its distinctive look. Jim Crane today 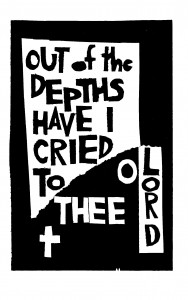 remembers that while the magazine did articles on well-known artists like Ben Shahn, most of the art was done by him, Robert Hodgell, or Peg herself, most often for very little pay. She also assembled a travelling collection of art that she took to colleges so students could actually see real art in person. Although she worked in many media, the work for which she is best known is her calligraphy.