On May 24, 2021 (8:00-12:50 SAST), the University of Pretoria Centre for the Advancement of Scholarship and the Johannesburg Institute of Advanced Study are hosting a symposium which will remember the Bulhoek Massacre of 1921, in which members of the Israelites Church were killed by Union police and in which its leader, Enoch Mgijima, was arrested.

The program can be viewed here. Register to attend here.

On May 27-28, the McDonald Centre for Theology, Ethics and Public Life and the Faculty of Theology & Religion at the University of Oxford will host an online conference on the theme "Christianity, Commerce and Civilisation? Christianity and Empire Revisited: Historical and Contemporary Perspectives."

During the Modern period the study of patterns of colonialization and the development of empires has focussed on the expansion of the Western mercantile powers. A perennial question in reviewing these processes of history, commerce and politics has been the question of the role of religion and more particularly the place of Christian Missions. It is reflected in the well-known phrase of David Livingstone which forms the title for the conference. Whilst the complexity and nuances of the issues have often been recognised by professional historians, in popular discourse the debate has often been caught up in ‘culture wars’, in which missions and missionaries have too often simply been assumed to be ‘agents of empire’. The aim of this conference is to explicate further the complexities of the relationships between Christianity, Missions, Colonies and Empire as they developed in the Modern era, and to contribute scholarly insights from historical and other disciplinary perspectives.

The keynote address will be given by Prof. Brian Stanley, Professor of World Christianity at the University of Edinburgh. Find the abstracts to all the conference presentations, as well as registration information, here.

Theology & the Arts in the African Context

On May 26-27, the Center for Primal and Christian Spirituality at the Akrofi-Kristaller Institute of Theology, Mission and Culture will hold a Theology and the Arts Symposium on the theme "Christian Faith and the Arts in Africa: Bridging the Cultural Divide." Register here! 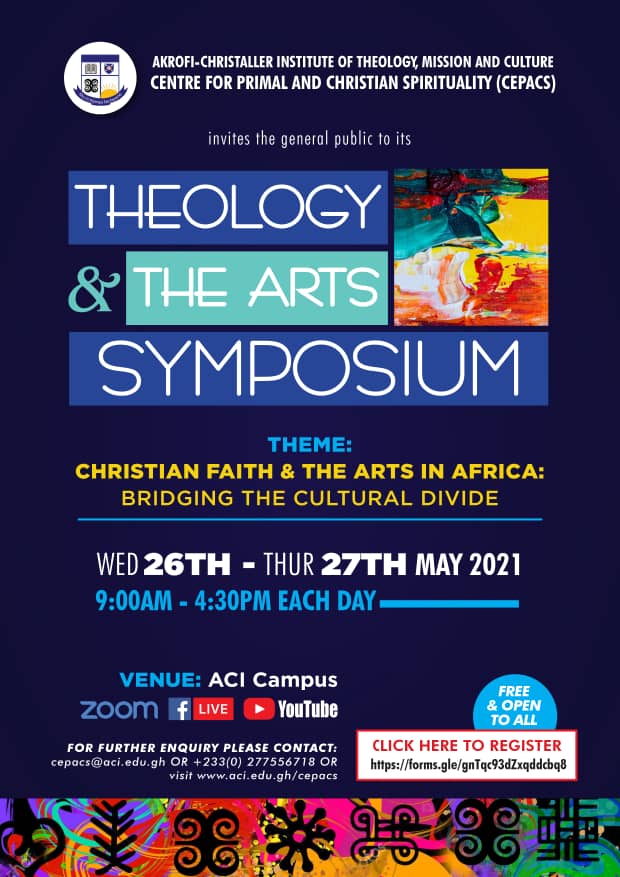 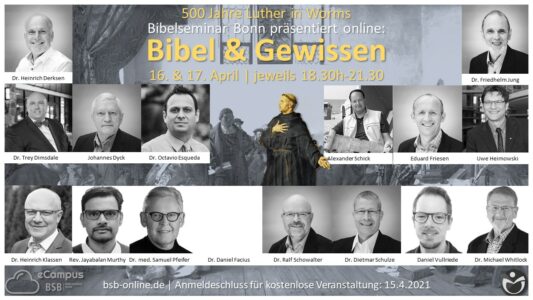 Bibelseminar Bonn, which has an extension center of Southwestern Baptist Theological Seminary, presents an online event on the 500th anniversary of Martin Luther’s courageous speech at the Diet of Worms. With Luther’s reference to the Bible and his conscience as his guiding principles, the Reformation gained tremendous momentum. The modern understanding of conscience can be traced back to Luther.

"Unless I am convinced by Scripture and plain reason – I do not accept the authority of the popes and councils, for they have contradicted each other – my conscience is captive to the Word of God. I cannot and I will not recant anything for to go against conscience is neither right nor safe. God help me. Amen."

Conscience is being shaped by many factors like family, education, culture, religion, and zeitgeist. Conscience is neither neutral nor objective. Luther's appeal to conscience had positive and negative consequences. Christians felt compelled by their conscience to contribute to the ongoing divisions of the church, the existence of 45.000 denominations (2019). It would be safe to assume that it was not always the Holy Spirit who caused a church or denomination to split.
The event helps to think about this question: "How often and by what do I calibrate my conscience?"
16 international speakers will give 15-minutes presentations with 5 minutes afterwards for questions and comments. There will be no recording. A live participation during the below-mentioned time slots is the only way to see the presentations and ask questions. This event will cover both history and current events.
This free event will be offered via Zoom on Friday, 4/16 and Saturday, 4/17, both from 6:30 PM – 9:30 PM Berlin time(ET: 12:30-3:30 PM) in German and in English with simultaneous translations. Sign up for free until 04/15/2021.
Lecture topics include the following: "The Bible and Conscience in Three Important Spanish Reformers" with Dr. Octavio Esqueda, "The Role of the Conscience among the Anabaptists" with Dr. Dietmar Schulze, "The Relationship between Bible and Conscience in the Russian-German Context of Free Churches" with Dr. Ralf Schowalter, and "Lutheran Mission among Dalits in Pandur, Tamil Nadu" with Dr. Jayabalan Murthy.

By Morgan CragoMarch 31st, 2021in Announcements, Call for Papers, Opportunities

The New England-Maritimes Region of the American Academy of Religion is hosting a virtual symposium on April 9, 2021. Registration is now open, and the schedule is available. Dr. Mayra Rivera of Harvard Divinity School and Dr. Marla F. Frederick of Candler School of Theology will serve as keynote speakers.

Current BUSTH PhD candidates Shaunesse' Jacobs and Sheila Otieno are serving on a panel at 10:15am to discuss "Graduate Study in Times of Crisis."