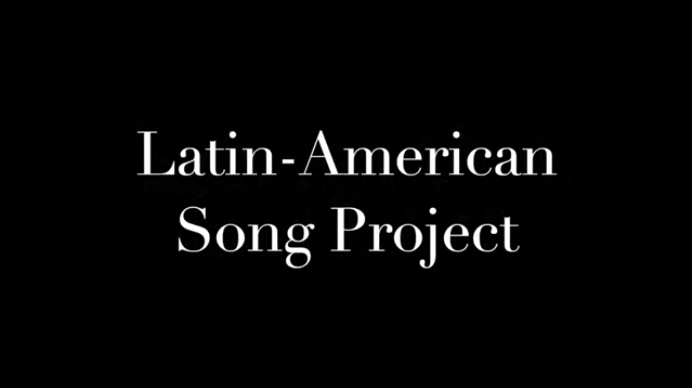 We are excited to share a semester-long project from Boston University College of Fine Arts School of Music Voice Department. Under the guidance and direction of Dr. David Guzman, Assistant Professor of Music in Voice, and along with collaboration from Lecturer in Music and Voice Department Chair Douglas Sumi, both undergraduate and graduate voice students present a collection of Latin American art songs.

“That could be explained in different ways. One could argue that composers had difficulty spreading their music due to the lack of proper network channels in certain regions of South and Central America. Thus, non-existing printing companies or unsuccessful establishments left the composers with only one edition of their oeuvre. Beyond that, it could be argued that the rurality of South and Central America with a couple of big cultural centers as Mexico City and Buenos Aires in Argentina consuming western ‘classical’ music left the composers and performers without a market.

There is a wealth of forgotten Latin-American art songs. Printed music hidden in private collections and music libraries is waiting to be rediscovered. It is of vital importance that we as an academic community join efforts to research, curate, and program the Latin-American art song repertoire, to understand the musical idiosyncrasies of racial mixture throughout the Americas – keeping the sounds of our ancestors alive.”

We invite you to watch and listen to the Latin American Song Project. Full program and translations can be found here.

Founded in 1872, Boston University College of Fine Arts School of Music combines the intimacy and intensity of traditional conservatory-style training with a broad liberal arts education at the undergraduate level and elective coursework at the graduate level. The school offers degrees in performance, conducting, composition and theory, musicology, music education, and historical performance, as well as artist and performance diplomas and a certificate program in its Opera Institute.