By Julie Butters | Banner image by Alison Staffin
Originally posted in the spring 2017 issue of Esprit.

How many colors do you see in the above image?

You may have guessed four: one for each of the four squares. But the answer is three. The two small squares are the same color; they only appear different because of their contrasting backgrounds.

The artwork, created by Alison Staffin (CAS’17) for a CFA studio class, reveals what a trickster color can be. It can change its appearance by “stealing” from the hues around it. The way our brain interprets color depends on context; as a result, the small squares appear to be different hues of gray.

(Not seeing the illusion? Distance can enhance the effect: try stepping away from your computer or device to view the artwork. Still no luck? Screen display settings, or differences in how color can appear across browsers, could be altering the true colors of the original image.) 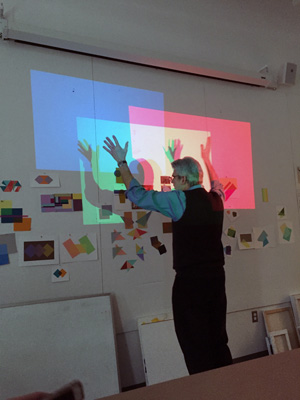 At CFA, students learn how to master this elusive element of art by studying color “problems,” experimenting with different combinations to create artistic sleights of hand. They discover that color isn’t so much about what viewers see as about what they think they see.

“Color class prepares us to be fooled, and to enjoy the swindle, to use [artist Josef] Albers’ word,” says Richard Raiselis, the associate professor of art who teaches the course. But the goal of learning about how colors affect each other, how context impacts perception, and how to quantify subtle differences in colors’ shades, isn’t just to perform impressive tricks—it’s to cultivate superior artistry.

To use color effectively—whether to grab attention in an ad, set mood with stage lighting, or create the appearance of depth in a painting—artists need to be as familiar with colors as magicians with cards in a deck, and manipulate them with the same dexterity.

Raiselis brought the class to CFA in the 1990s. Like many art instructors, he based it on what was likely the first such course in America, taught by German-born artist Josef Albers at Black Mountain College in North Carolina, and later at Yale University. Albers, who had studied and taught at Germany’s famous Bauhaus art school in the 1920s and early 1930s, was part of a mid-20th-century shift in art that rejected the depiction of real things or people in favor of focusing on color itself—and its power to create illusions.

“Color class prepares us to be fooled, and to enjoy the swindle, to use [artist Josef] Albers’ word.”
—Associate Professor Richard Raiselis

From the time he was a toddler, Raiselis was interested in art, but his parents encouraged him to choose what they considered a more practical career. He studied biology at Yale in the early 1970s, with an idea of continuing to medical school. But in his second term, while writing a paper about color vision in insects for a zoology class, “It was obvious that the art part of me was still alive,” he says. The next year, he took a color class under Richard Lytle, Albers’ former assistant in instruction, and switched his major to art. He was captivated by the beauty of the silk-screened Color-aid paper, the process of trial and error in completing color assignments, and the stimulating challenge posed by the seemingly simple task of cutting and pasting paper swatches. After graduation, he taught a color class at the City University of New York in Jamaica, New York, and the University of Michigan School of Art before arriving at BU.

Raiselis’ class, which meets in a studio on the fifth floor of 808 Comm Ave, is structured as a series of progressively difficult assignments derived from Albers’ 1963 book, Interaction of Color. It’s also peppered with museum visits and lectures by Raiselis on topics such as artists’ use of color throughout history. The class is open to all BU students, which allows for an exchange of perspectives and knowledge. For instance, Morgan Bush (CAS’16), who majored in psychology and minored in visual arts, says she “had something to contribute when we were talking about how the brain processes color.” 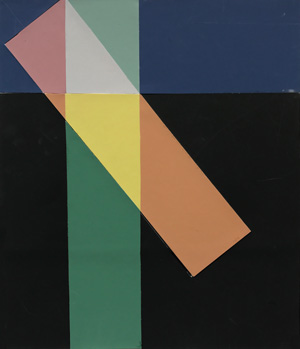 Students in CFA’s color class complete assignments that make optical illusions and show how colors affect each other. For the assignment above, Alison Staffin (CAS’17) used paper to re-create lighting effects produced by overlapping slide projections. The project demonstrates additive light, in which mixing colored light creates lighter hues than those being mixed.

Raiselis introduces the class’ central concept—that color is relative—on day one, by asking students to line up two sheets of blue and red silk-screened Color-aid paper and stare at their boundary. The color of each paper acquires a neon brightness along the horizontal join, and the remaining portions of the papers seem to grow duller by comparison.

Each class assignment is treated as a problem for students to solve: for example, as in the artwork at the top of this page, how to make one color look like two (other assignments might include making two different colors seem the same or making three colors look like two). Raiselis shares examples of the color illusion they’re going to create—such as artwork by Albers himself—and weighs in as students work, but lets them discover “empirically, through trial and error,” how to create the desired effect. Students use various combinations of the 314 colors in their personal pack of Color-aid paper; in some assignments, they have the option of using stripes, squares, or rectangles. Although there’s no one solution to a problem, there are a lot of ways things can go wrong. As anyone who’s attempted to match socks in a dimly lit room knows, light affects how colors look. Students can unintentionally ruin their artwork by removing it from the natural sunlight of the north-facing studio to tinker under fluorescent dorm lights. 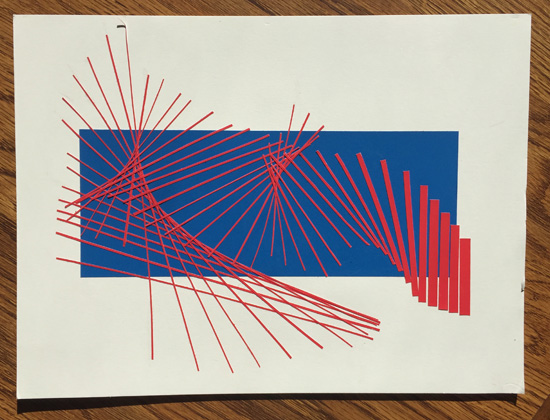 For the project above, students were told to use stripes of any thickness, color, and composition to create a vibration effect. This is achieved, says the artist, Alison Staffin (CAS’17), by choosing different hues with similar degrees of lightness or darkness and by using thin stripes as opposed to large swatches.

Students discover that “some colors are better actors than others,” Raiselis says. Take the artwork by Staffin: a neutral color works well for the small squares, because its muted nature makes them more susceptible to being influenced by surrounding colors. “It is impossible to see a single color in an isolated system without it being affected by anything else,” says Staffin. “You don’t see color for what it is, ever.”

The scientific explanation for why our eyes are fooled by this kind of illusion has to do with how the brain interprets color. “Your perception of the world is not based on what the actual visual world is,” says Jeff Gavornik, a College of Arts & Sciences assistant professor of biology. “It’s based on your brain’s attempt to make sense of that.”

“It is impossible to see a single color in an isolated system without it being affected by anything else. You don’t see color for what it is, ever.” —Alison Staffin (CAS’17)

The eye, he says, tells the brain what color it’s seeing in relation to adjacent colors—in terms of contrast and boundaries. When we look at a piece of white copy paper, our cornea and lens project that image onto the back of our retina. “What your brain responds to, what your retina responds to, are the retinal cells that lie across the edge of the paper in that image, where there’s high contrast,” says Gavornik. The brain effectively fills in the spaces between the edges to interpret the entire page as white. When we look at Staffin’s image, our eye can’t directly compare the color of the two small squares; it can only tell the brain about the color of each square relative to the color surrounding it.

Color class is a favorite with students, not only because it’s full of surprises, but because it elevates their craft. Tanner Gauvin (’18) says he’s become “more experimental” and “more knowledgeable of the colors that I’m using—picking and choosing when I really want to grab the viewer with a certain pairing of colors, and when I want the viewer to be relieved by a really subtle shift of colors.” Dina Martinelli (’15,’16), an art teacher at Jaworek Elementary School in Marlborough, Massachusetts, says what she’s learned about how dissimilar colors enhance each other has added stronger contrast and the illusion of depth to her collage work. And Staffin, a biology major who now studies graphic design, says she’ll use her color knowledge to control what elements in an infographic stand out to the viewer first.

Even Raiselis is still learning a thing or two. “I think there are color relationships in my paintings that didn’t exist [in my work] a couple of years ago,” he says—and although he’s been teaching color for decades, it still gives him a thrill. “To see people’s eyes open [to what color can do] is pretty exciting. For me it’s magical, and there’s always something we can learn.”

Read more articles in Esprit, the publication for alumni and friends of the Boston University College of Fine Arts.