Sculpture? Painting? Whimsy? Monstrous? Just try to explain or define Claire Ashley’s work. It doesn’t quite fit into a figurative box (or literal box for that matter). Her enormous pieces of inflatable art stretch the confines of gallery space as well as the bounds of definition to meld painting, sculpture, installation, and performance.

With pieces that climb 25 feet in the air and extend up to 20 feet wide, Ashley’s work challenges space as well as conceptions. It will be hard to miss the inflated, bouncy house-like structures streaked with color when they ascend in the 808 Gallery as part of Claire Ashley: (((CRZ.F.4NRS.AAK))), September 15-December 3, 2017. 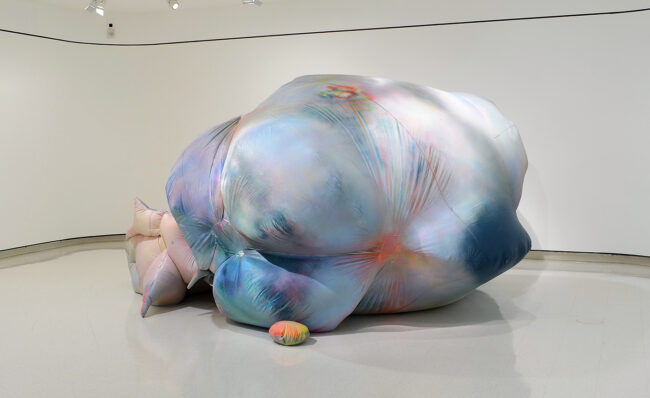 “The pieces almost explode out of the space,” explains Lynne Cooney, Artistic Director of the Boston University Art Galleries (BUAG). “The work plays with the scale of the space and welcomes the constraints of a window or ceiling.” The sprawling size of the 808 Gallery often makes it well-suited for group exhibitions so to host the Scottish-born Ashley’s first solo show in Boston is quite exceptional. “Solo exhibitions in 808 are usually very challenging,” says Joshua Buckno, Managing Director of the BUAG. “It can be tricky to find artists that can work with the restraints and assets of the space. We liked the idea of the inflatables. There’s a sense of humor with the large scale. We wanted to try something new in the space, so we have been experimenting with installations without walls.”

Constructed of painted, hand-sewn plasticized tarps that are then inflated, Ashley’s pieces create a multi-sensory experience. “They’re not subtle pieces and they don’t allow for definition. There’s an ambiguity in medium, an oscillation between picture playing and a 3-D sense of sculpture,” explains Cooney.

The bulbous, exaggerated, taut forms seem to morph beyond the silly into a funhouse that explores the grotesque and uncomfortable. According to Ashley’s artist statement, she uses “humor, acidic color, obnoxious scale, and absurd pop-culture references to challenge art historical precedence and current art world power dynamics” and is “interested in how objects ‘look’ as opposed to ‘how’ they are created.”

This “look” can conjure humor and mischief while striking some serious tones as well. As Cooney explains, “Ashley uses bright colors so there’s a playfulness of form that undermines the simplicity of pop art through complex, feminist perspective.” This aspect is central to Ashley’s approach and is reflected in her artist statement: “My work is particularly invested in exploding the structural possibilities of abstract painting, expanding the kinetic possibilities for monumental sculpture, and enlivening the dialogue around contemporary art across class, gender, age, and education.”

The installation in 808 Gallery invites visitors to explore the art up-close both in form and function. Ashley finds “the inflatable form compelling, as it exists in two states: both as flaccid skin and taut volume” and uses the “polarities of form within these objects as metaphors for our bodies: inhaling/exhaling; taut/wrinkled skin; flaccid/erect organs.”

She is interested in how “a body can activate sculpture, and how the [sculpture] abstracts and extends that body.”

Across the street at the Faye G., Jo, and James Stone Gallery, the BUAG will feature Geoffrey Chadsey: Heroes and Secondaries. Opening in October, the solo exhibition explores visual sensibility, perception, and reality through depictions of the human body. 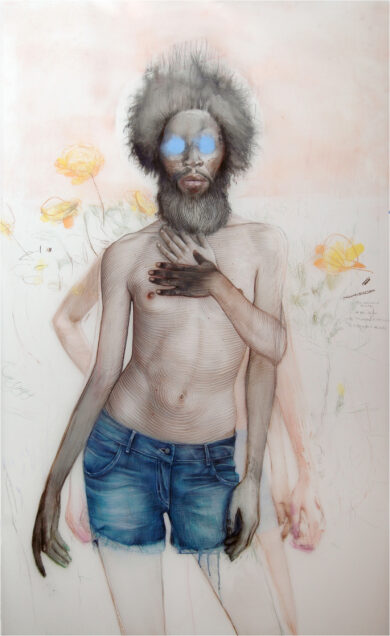 “Geoff has an amazing ability to layer the relationship of different images to create, what I call a very ‘particular whatever’,” explains Cooney. “He inserts elements that don’t make sense, that make you question what you’re seeing.” With a background in photography and drawing, Chadsey sources images from the internet to create sketches on paper that are rendered on large sheets of Mylar. Playing with spatial reasoning, Chadsey also uses exaggerated scale in his work often producing figures that are larger than human proportions.

“The work really mixes enigmatic subjects so he’s able to reference a lot of ideas in one figure,” says Cooney. “He’s able to manipulate and manifest the body with humor as well as intrigue so the work is really confronting the viewer.” Chadsey’s first solo show since 2007, Cooney remarks that the exhibit promises surprise as well. “Geoff has been making a lot of new work and exploring new ideas so that integration will be on display in this exhibition.”

A companion to the Stone Gallery show is Private Screening: A Selection of Experimental Film running in The Annex beginning October 10. The first open call exhibition of video presented by the BUAG will feature ten experimental videos by New England artists. While the BUAG has featured video pieces in shows, this exhibition is the first show to exclusively run digital.

“We decided to approach the Annex space in a different way,” says Buckno. “We’re excited to connect with people that maybe we don’t know about already. The student shows at CFA are featuring more and more video and there’s a desire to engage with media so it’s interesting to explore that space.”

Private Screening:
A Selection of Experimental Film The Annex